Newsletter
Sign Up today for our FREE Newsletter and get the latest articles and news delivered right to your inbox.
Home » 1960 Chevrolet Impala Convertible – Family Inheritance 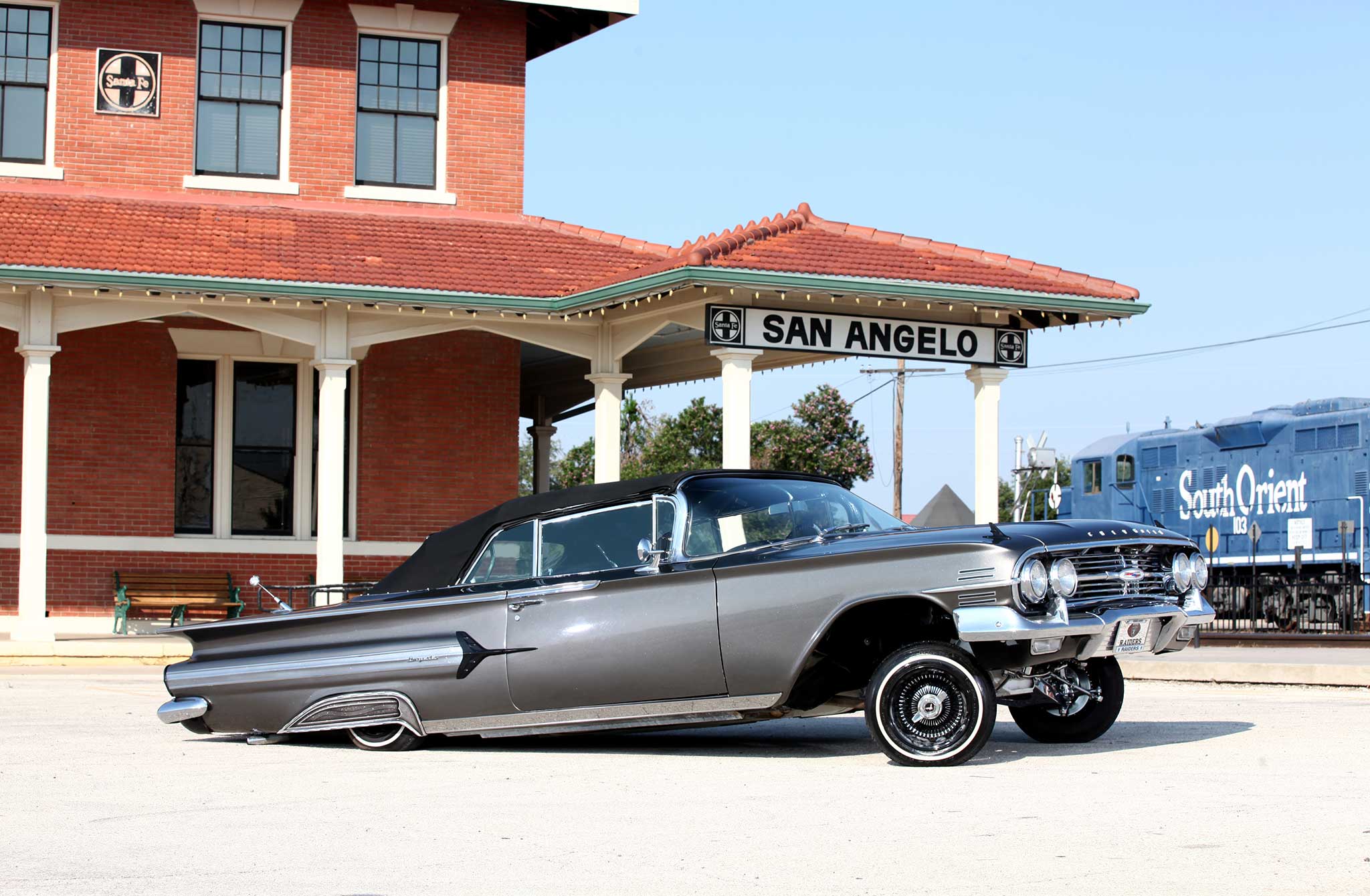 We biologically inherit the genes of our parents so it’s natural to assume we inherit some of their characteristics, but truth be told we instead develop them as a result of the life experiences we pass through. Jaime Rodriguez of Odessa, Texas, and his father have spent a lifetime working side by side on their labor of love; creating a bond that transcends the traditional father-son relationship. For nearly 30 years their dual fleet has grown into an impressive collection, but the latest masterpiece is Jaime’s most favorite, an impeccable 1960 Impala lowriding gem.

Just as any car enthusiast’s fondest childhood memories, Jaime recalls his two biggest passions — football, and more importantly, turning wrenches on the unforgettable classics his dad built. The cherished pastimes with the family were spent watching the Raiders games and Jaime’s dad taught him that the first greatest Latino NFL quarterback once suited up in black and silver to led their favorite team to a memorable Super Bowl win. Jim Plunkett stood tall in the eyes of the Hispanic community and his feats inspired other Latinos to rise up and make a name for themselves.

Jaime was definitely impacted by this and his thriving oilfield business of Downhole Services today is proof of success. During NFL off seasons back then, 9-year-old Jaime remembers handing tools to his father while he restored a ’62 Impala and a ’64 SS while learning about the lineage history of the Chevy lowriding favorite. As the clock moved forward, Jaime and his dad’s passion for cars never dwindled, in fact the assemblage between them totals over 20 custom vehicles now. This particular 1960 Impala is a prime example of Jaime’s vision and unfailing determination to breathe life back into resurrecting such a unique Bow Tie showcasing the lowriding flavor.

The purchase price was steep $30,000 dollars, but the investment was well worth it to the new titleholder. Jaime made the long haul from West Texas to the Pomona swap meet to load up his new venture. Overall the car was in good shape, but plans for a new House of Kolor galaxy gray were in order, but first Nick Hernandez Jr., owner of Bajito’s Body Shop in Odessa, tasked his best bodyman, Jerry Leija, to tackle the intensive feat of stripping it down to bare metal and banging out the imperfections. Nick Jr. counted six previous layers of paint so the need to start fresh was warranted. David Ibarra, Shadow, owner of 7eventh Son Art Studio in Dallas, Texas, airbrushed Felix the cat with a smile now, cry later combo touting Jaime’s last name as a club plaque. Jaime performed a full wrap reinforcement on the frame and entrusted Iron Man Powder Coating to dress the structure.

The 1960 carriage came equipped with a 350 four-bolt main, but it was swapped out for a 283 with 327 performance heads thanks to the master wrenchmen at Al’s Automotive. Perched inside the engine compartment is a custom aluminium three-row radiator painted and airbrushed by Rick Valdez of Odessa. The hefty horsepower transfers plenty of torque to the 2000 Toyota Tacoma chrome rearend. Keeping the Impala planted to the blacktop is a set of 13×7 100-spoke OG wires wrapped in 155/80/13 Hankook tires. There is a plethora of chrome-plated items from end to end, inside and out, and even on the underside thanks to Electroplating of El Paso, Texas. Xtreme Sounds and Upholstery was tasked to not only redo the interior stitchwork, but also execute the flawless install of the Stayfast convertible top from Kee Auto tops.

Jaime debuted the Chevrolet at the infamous Tejano Super Show in Odessa, hosted by Nick Hernandez, LRM Hall of Famer. Jaime said, “I dedicate this build to my father’s love of cars; thanks to him and the influence of the lowriding movement in West Texas, my ’60 convertible is a representation of my appreciation in this hobby.” He also extended his loving thanks to his wife, Mari, and his six children, Andrew, Vinny, Santos, Gissell, Aylssa and Alynna for their support throughout the build.

Sound system: Alpine head unit with 6.5-inch mids in the kick panels and four 8-inch Hifonics Solo Baric woofers in the trunk. Hifonics 500-watt amp and all installed by Pedro of Xtreme Sound and Upholstery.