Newsletter
Sign Up today for our FREE Newsletter and get the latest articles and news delivered right to your inbox.
Home » 2013 Harley-Davidson Custom Softail Deluxe – Lei Low 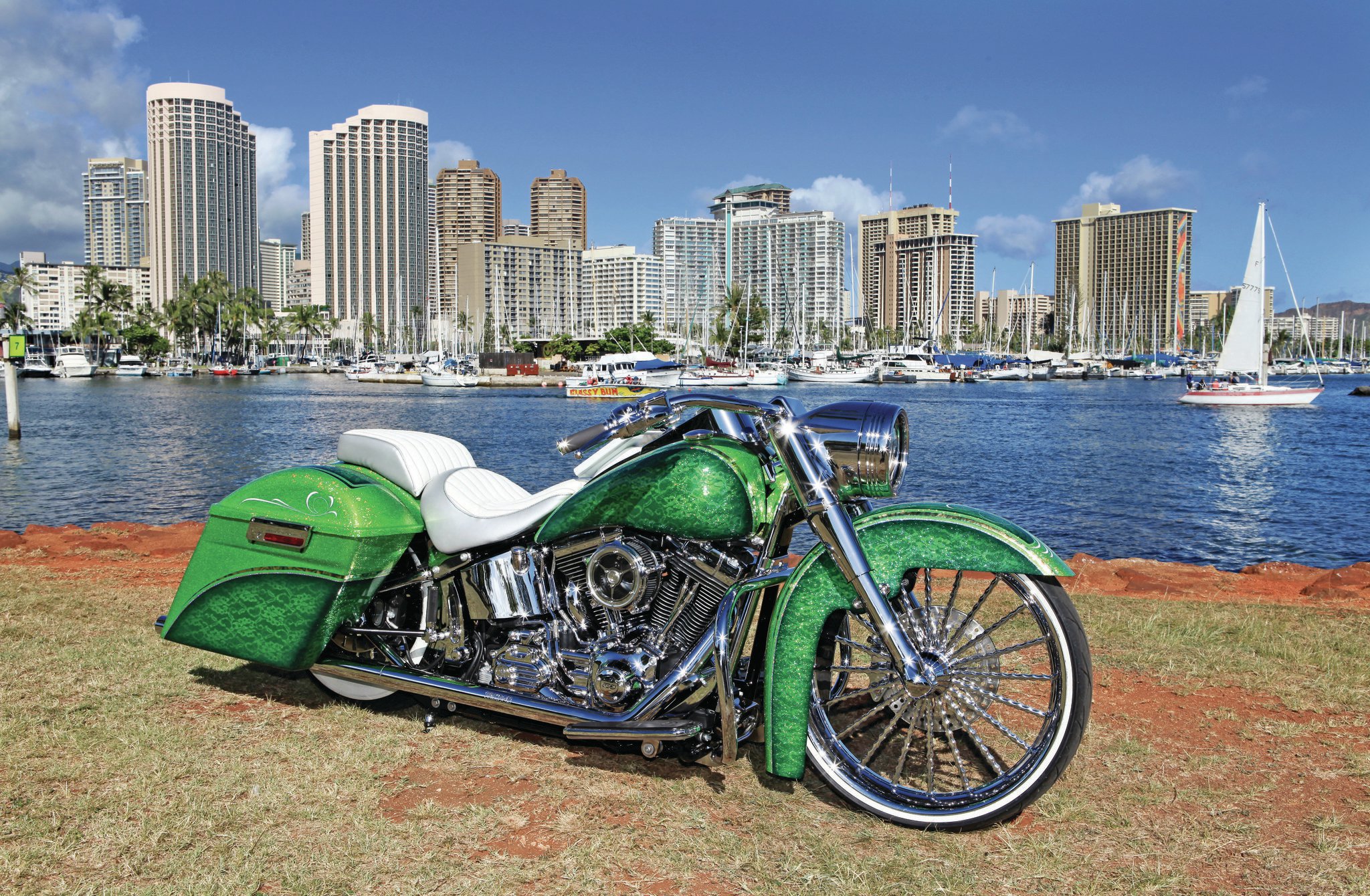 We look forward to any chance we can to venture off to Hawaii. Lowriding culture there is as strong as the friendly people, great food, and awesome scenery. Sometimes, while at one of the island’s spectacular shows, we get to sneak off and shoot photos of one of the participant’s rides, or find out about one nearby that we should check out. We couldn’t help but want to point our lenses at Reggie Javier’s beautiful bagger. It’s certainly seems to be the two-wheel version of tropic thunder.

As a bodybuilder, Reggie is a go-big kinda guy, and when you combine that with his lifetime love of lowriders, his projects understandably follow suit. Since garage space was only limited to something on two wheels, that didn’t stop him from decking out this 2013 Harley-Davidson Deluxe and converting it to a Softail bagger, courtesy of Bad Dad. So where do we start? The front was given a Native Custom air ride and rear was done up with a Shotgun air ride system by Kustom-Fab in Honolulu to give it the right stance. A custom center stand was made so the bike could park better than what the factory stand could accomplish.

For the motor, Samson exhaust, a Roland Sands air filter, hydraulic clutch, and ThunderMax ECM system keep everything humming consistently. Tunes come courtesy of an iPad head unit on the console, a Precision Power Amp, and Skar 6×9 mids thanks to JSP Auto Audio. A Road King headlight illuminates the front while a recessed Harley LED brake light brings up the rear. A beach bar controlling the Ride Wright twisted-spoke billet wheels keep this looking good wrapped in whitewalls and come to a stop with the assistance of a six-piston JayBrake front caliper.

The custom Kandy Green paint was adorned with thick diamond-cut flakes for a neon look, complete with gold leafing, pinstriping, and lace patterns. Wish Quering at Junkshop Pros in Honolulu laid down the impressive two-tone scheme. Fred’s Auto Top in Honolulu also did up the custom white seats. While Reggie says he may do some engraving and possibly repaint it, we’re hard pressed to imagine how much better this bike can look.

Reggie wants to thank the Lord, his wife, family; Roger, Norio, and Mel from Kustom-Fab; Ronald and his team from Junkshop Pros; Alex and Q from JSP Auto Audio; Wish Quering, KC Pali, Andy Abalos, Roger Lischka, and Fred’s Auto Top for their assistance in putting this “aloharley” together. Rides like this are one more reason (as if we didn’t have enough) we love to venture out to the islands.