Newsletter
Sign Up today for our FREE Newsletter and get the latest articles and news delivered right to your inbox.
Home » 1957 Chevrolet Bel Air – The Fresh King of Bel Air 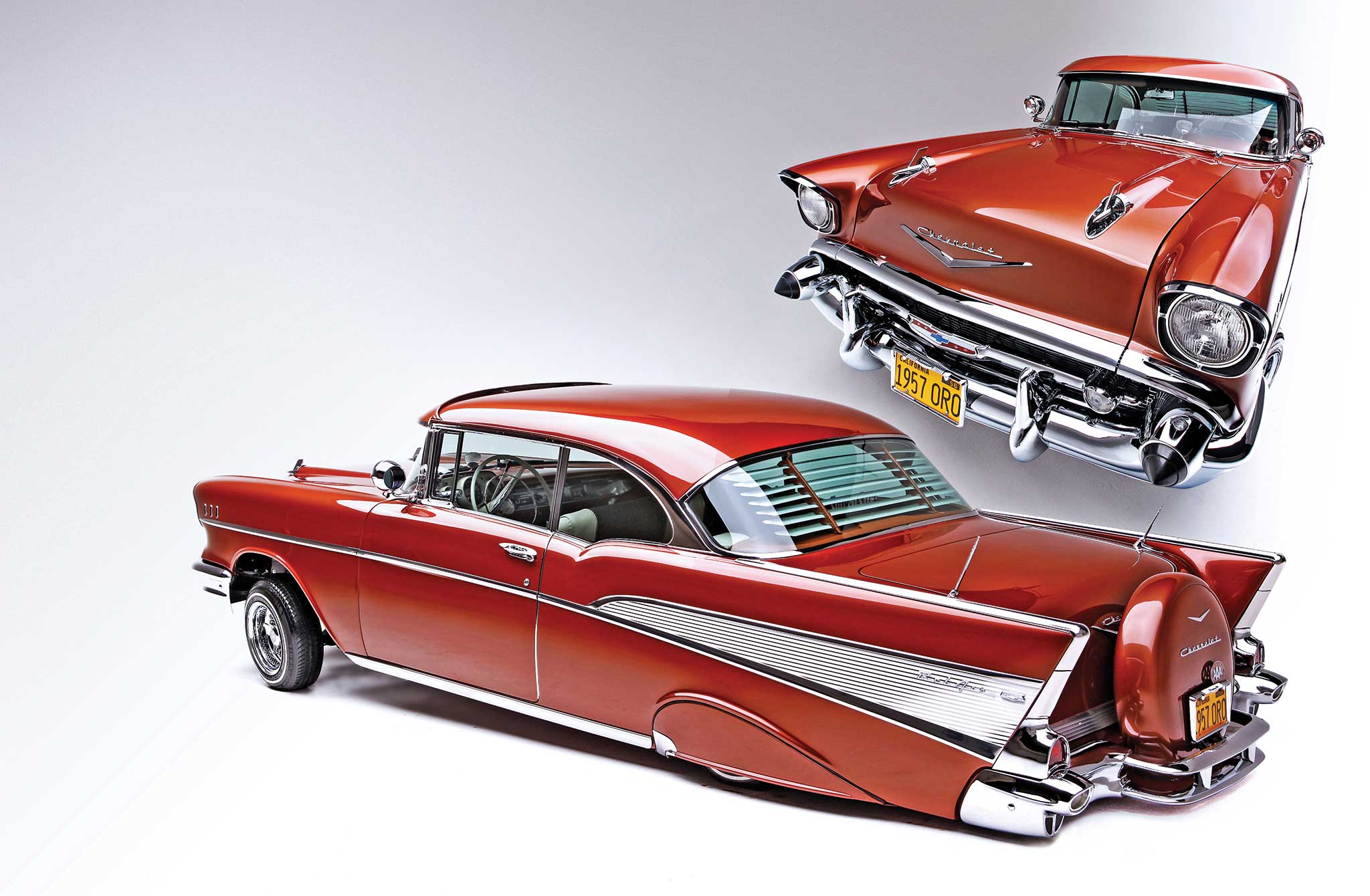 After reading the headline you might wonder if this Chevy belongs to Will Smith. No, but anyone who had to sit through After Earth would agree he doesn’t deserve one this nice anyway. The real question is, how do you make an automotive icon look even better? The ’57 Chevy, even by today’s standards, is pretty hard to improve. If you’re Alfredo Gonzalez, one thing is for sure — you don’t cut any corners to get it where you want it.

Alfredo came across this stately cruiser when Anthony Fuentes from Homies Hydraulics put it up for sale. It was missing quite a few parts, but Alfredo wasn’t about to go with anything less than NOS parts to complete his build. The visor? New, in the box. Are those original blinds, you ask? Sourced off the previous owner. The host of other accessories include a continental kit, power antennas, original license plate frames, Wonder Bar radio, litter bag, power bench seat, locking gas cap, Foxcraft skirts, spotlights, vacuum ashtray, traffic light viewer, autronic eye, and various guards just to name a few. We’re not sure if it’s fully loaded or not, but with all these original gadgets, you’d had to have been pretty well off in 1957 to order all this!

Powering this regal ’57 is a four-bolt 350 and 700-R trans done by Manny Rojas from Downey, California. The brake booster came off a Chevy truck and the rearend was shortened for the skirts to fit. The front Corvette spindles also sport disc brakes and are connected to the 1 1/2-inch extended A arms. The Canadian frame was reinforced, wrapped, and bridged by Anthony so it can lay on the ground. Anthony also did the hydros to include the whammy pump, three squares, four batteries, four switches, and six solenoids.

Body and paint was handled by Jose Pedroza of Fontana, California, and given a nice douse of Sierra Gold, a factory ’57 color. Mike Lamberson of Draggin Lines did the gold leaf and pinstriping, while Juanito of Show Status in Santa Paula, California, did the Aztec-themed murals. All the chrome came together thanks to South Bay Chrome in Santa Ana, California.

We’re not sure this ’57 could get packed with any more coolness, but Alfredo has done a man’s job pulling all this together for a lovely ride. Many thanks go out to Alan Forbush for hooking him up with all the NOS parts, Manny Rojas, Jose Pedroza, Juanito, and Mike Lamberson. We think all these guys deserve a crown for the amount of work that went into making this ’57 worth a king’s ransom.

Suspension: Frame was reinforced, wrapped, and bridged by Homies. Anthony also did the hydros to include the whammy pump, three squares, four batteries, four switches, and six solenoids.