Newsletter
Sign Up today for our FREE Newsletter and get the latest articles and news delivered right to your inbox.
Home » 2005 Harley-Davidson Softail – Un Dia La Vez 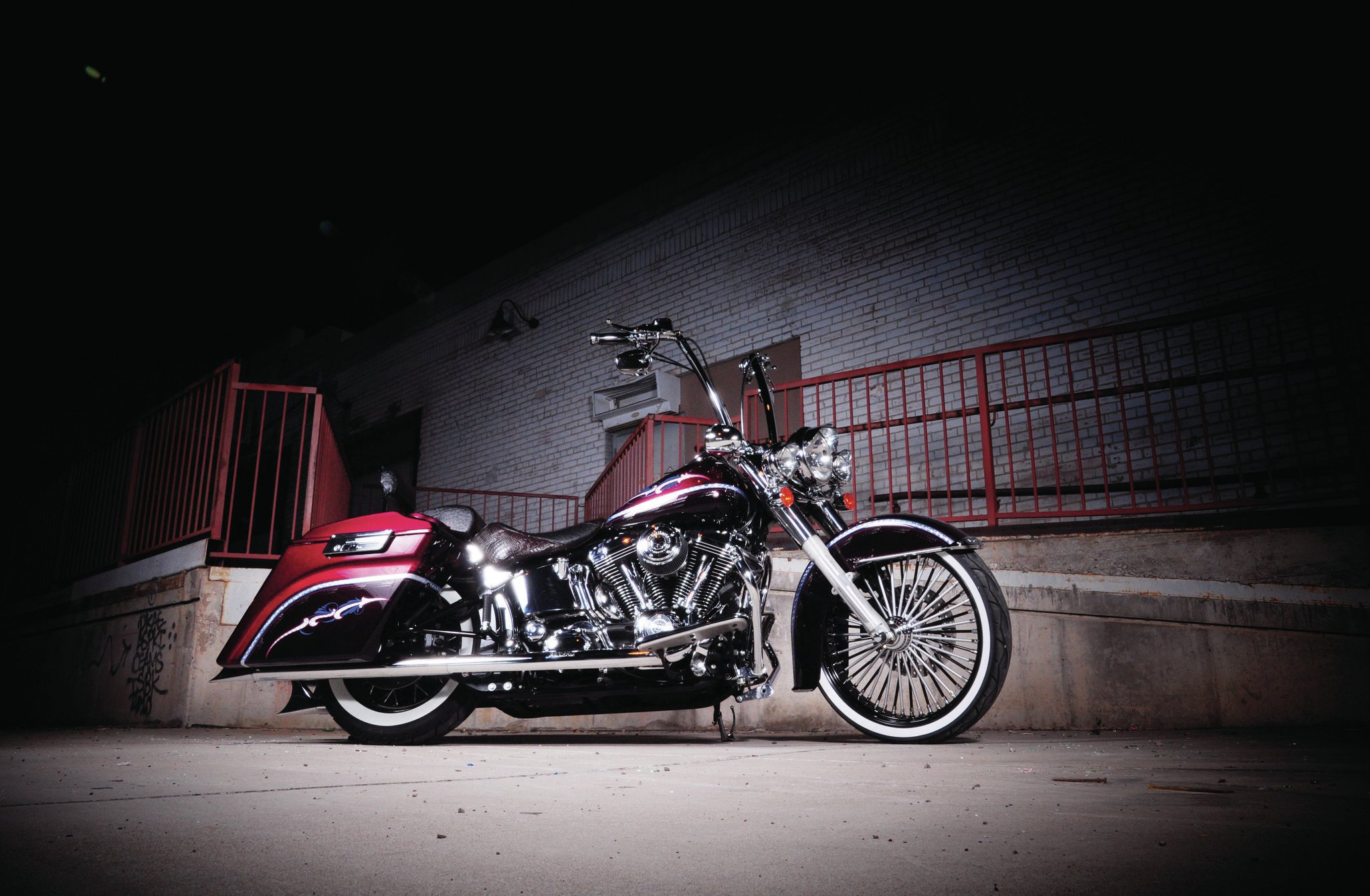 Friends are an excellent motivator when you need to get something done. Whether it’s them giving you encouragement and positive reinforcement or you just want to prove a point to them, friends are often the best way to get you to do something. For Jorge L. Lopez Jr. the latter situation with his friends is what motivated him to get a motorcycle.

Having friends who ride, Jorge used to tell them that he would have a bike of his own one day. Jorge’s friends, thinking he would not follow through on his word would respond to him lightheartedly with “Yeah, yeah.” Determined to prove otherwise to his friends, Jorge spent some time Internet searching and window shopping before finding his bike, an ’05 Softail, at a local dealership. After taking delivery of his Softail, Jorge’s friends invited him out to ride with them. However, Jorge knew that he had to add his own style to his bike first before going out with them.

Jorge took the bike over to Manuel at LiveFast Cycles where a specially ordered 55-spoke Ride Wright front wheel powdercoated in silver and black was put on. Manuel also installed 17-inch Carlini Evil Ape bars with chrome controls and black stainless steel hard lines. After Manuel was finished with that, the bike was taken over to Bugs from Bugs Auto Art in Mesa, Arizona, where it was painted and pinstriped, giving it an all black look, while a gray and black custom seat from R & R Customs was added to top it all off.

Happy with the way his bike was looking, Jorge took it to a local show. Arriving at the show, Jorge was blown away after seeing what other people were doing to their bikes. Wanting to make sure his bike could stand out, Jorge knew that he had to step his game up so he started making plans to redo his bike.

Jorge took the bike back to Bugs to get it repainted. When asked how he wanted the bike done Jorge told Bugs, “I don’t care, you do what you do.” Jorge admits that this was a bold gamble to take, however, it was worth it after seeing the end result. Bugs had sprayed the bike a candy brandywine and accented it with silver leafing, pinstriping, and marbling.

After giving the bike a whole new paint scheme, Jorge knew he needed a new seat to go with it so he had R & R Customs put together a black ostrich/brown alligator leather two-tone seat with the bike’s name, “Un Dia La Vez” stitched across it.

Happy with the way his bike was looking, Jorge turned his attention to the way it sounded and had Unique Car Audio install two 6×9 speakers in the bags with two 61/2 speakers in the lids and two 31/2 speakers on the ape bars alongside three 300-watt Rockford Fosgate amps to power everything.

While most who see Jorge’s bike will say it looks done, Jorge, on the other hand, says that it is only halfway completed and he has many more plans for it. In Jorge’s words he’ll never be truly satisfied with it because he’ll always want something new and different.

Jorge would like to give thanks to Bugs Auto Art, R & R Customs, LiveFast Cycles, Royal Fantasies Car Club, Society Car Club, Family First, El Whyner, and all his motorcycle-riding homies for helping him build his bike and for teaching him the game of riding on two wheels.

Rides 2019 Southwest Choppers Softail – Not Off The Shelf

Most people buy a project and then tear it apart and go from there. Jerome Rocha didn’t start his bike project that way. He started with a brand new frame that he had hanging in his garage