Newsletter
Sign Up today for our FREE Newsletter and get the latest articles and news delivered right to your inbox.
Home » 1950 Chevrolet Deluxe & 1956 GMC 100 & 2006 Harley Davidson Deluxe – The Chicano Brown Tres 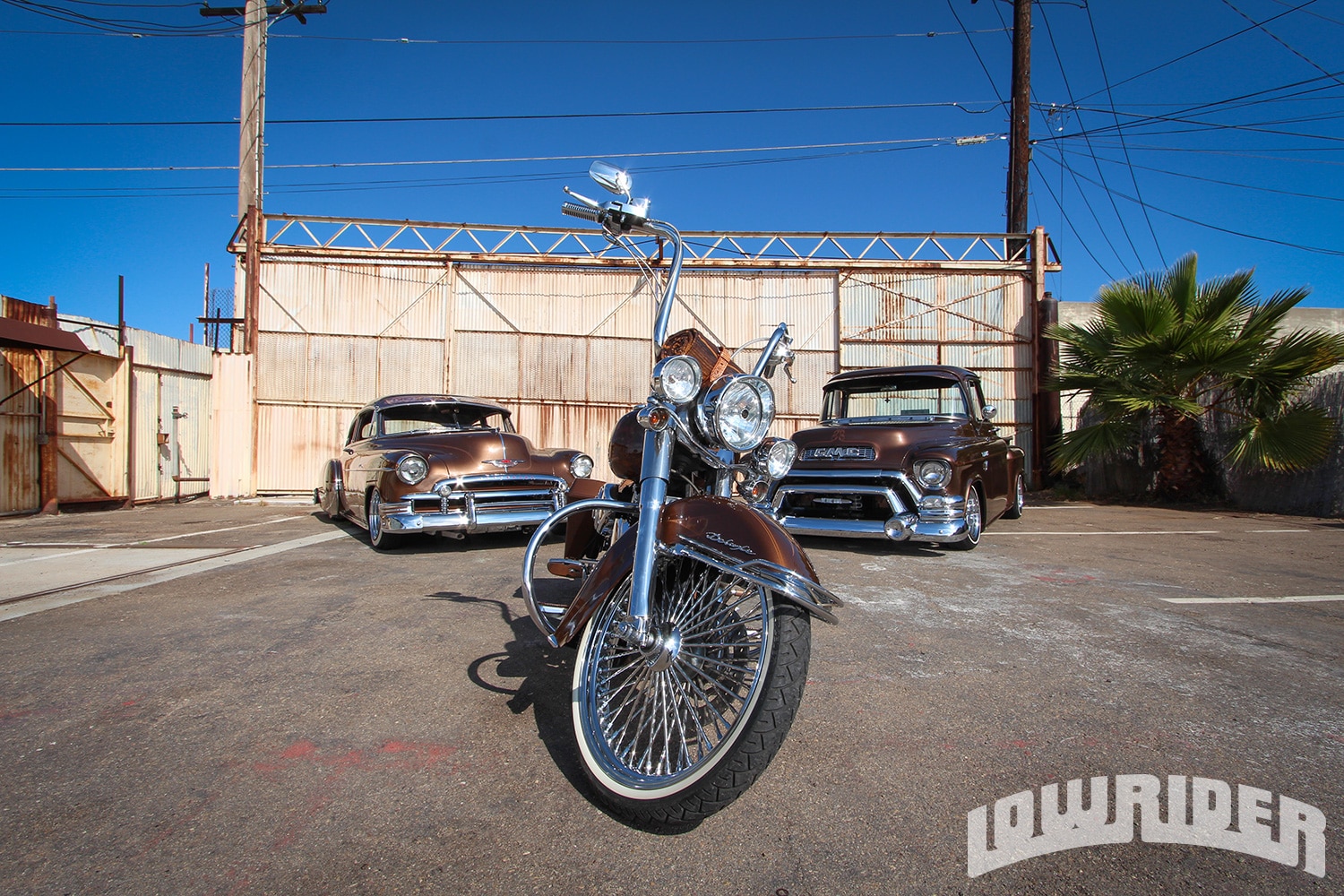 Rick A. Alvarez, better known as Raa (pronounced “raw”), is quite the icon in San Diego, California, and in the nearby border town, Tijuana, Mexico. As a first generation American-born U.S. citizen, Rick knows a lot about Mexican culture and its history firsthand through his Mexican-born parents and grandparents. Visiting family and friends in Tijuana is a regular routine for him and he does it with ease since Tijuana is in very close proximity to his San Diego home. As he gets around both sides of the border, people have definitely noticed him, his unique RAA Leatherworks business, or one of his three lowriders painted in the same metallic brown color.

Rick lived in Santa Ana, California, as a kid and recalls his godfather, Ramon Navarro, always cruising around in his cool ’56 GMC pickup, known as “La Chichona.” Rick took a liking to that truck and was fascinated with the attention it drew out on the streets. When Rick turned 10 years of age, the family moved down to the barrio of San Diego. He had it in his mind that he was going to own a custom car of his own one day and knew that he had to start saving money to do so. Rick gathered up some rags and a bucket and went down to the do-it-yourself car wash centers where a lot of the lowrider guys would go to shine up their rides before hitting the cruise strip on Highland Avenue in the National City area. He offered to help them out for a little money. The gig worked well and his time and effort paid off, not only in monetary terms, but also in the great connections he made within that custom car scene.

An opportunity came up one day for Rick to buy a ’50 Chevy Deluxe. He affectionately calls the car “La Adelita;” a common term that refers to a woman soldier of the early 1900s Mexican Revolution. As the makeover began, the restoration definitely revolved around the theme of its name. During this time however, Rick’s dear godfather, Ramon, unfortunately passed away. Ramon’s prized possession, the GMC truck, was graciously handed down to Rick. Although he liked the truck in the state that he always remembered it, Rick decided to tear it down and restore it; much in the same way he was doing with the Deluxe. Despite the changes, Rick did decide to keep the original airbrushed mural underneath the hood out of respect and to Ramon’s memory. The truck was painted in the same color as Rick’s other project, the Chevy Deluxe.

Aside from Lowriding, Rick has also had a passion for motorcycles. Many of Rick’s older cousins would roll up on bikes back in the ’70s, so he knew that one day he would have to follow in their footsteps and have a two-wheeled beast of his own one day. Finally, the day came when Rick went out and bought himself a brand new Harley Davidson. As with the car and the truck, the bike also went through a makeover; receiving Rick’s trademarked Chicano brown paintjob and revolutionary-style airbrushed murals. This bike, known as “El Revolucionario,” features a custom airbag setup, which allows it to have that mean lowered stance just like Rick’s other two rides.

These days, Rick can often be spotted cruising around San Diego or Tijuana in one of his unique brown rides, but it’s not always for pleasure! Business keeps him pretty busy, as he works long hours running his own one-of-a-kind leatherworks service. RAA Leather, as it is known, specializes in custom leather creations like leather upholstery and intricate, handcrafted pieces of artwork fully done in 100 percent genuine leather. Rick’s work can be seen on the seats of all three of his rides. Custom made leather backing plates are also on his hydraulic pumps in the Chevy Deluxe, and even Rick’s personal iPad cover bears his custom leather! The company’s incredible work is simply amazing and has been seen on movies and TV shows like “Sons of Anarchy.” One of Rick’s other popular creations is what he calls the “RAAZA Roll.” These custom bedrolls have been a hit in the California biker community. It’s a simple yet stylish way to wrap up an authentic Oaxaca blanket near the handlebars. These blanket rolls are sold in many Harley Davidson stores and other motorcycle lifestyle shops. More recently, Rick also started dispatching his Viclista Wear T-shirts to his vendor booths at local car and bike shows. Rick says that his business is doing well and that he works very hard to get his hustle on with both the shirts and the leatherwork.

Rick sends out special thanks to his abuelo, Ramon Navarro (rest in peace), his Uncle Juan, Mo, Carlos de Baca, brother Tato, and Victor Cordero for all their help and support with his rides and/or his business duties.

Body/Paint: Lil’ Rojo, over at Rojo’s in Tijuana, Mexico, smoothed out the body and prepared it for paint. “Chicano brown” was the name of the color used for the vehicle’s exterior finish. Victor Cordero, of Cordero Pinstriping in Chula Vista, CA, was the talented airbrush muralist enlisted to spray historic scenes featuring beautiful revolutionary women and ominous bandana-wearing biker skulls.

Setup: Two pumps with custom RAA Leather backing plates were installed by Steve Tavo, of SA Hydraulics in San Diego. Four deep-cycle batteries power the system which allows the front and back suspensions to raise and lower at the hit of a dash-mounted switch.

Body/Paint: G-Customs in Tijuana, MX, used a chrome base before spraying down the final finish in a metallic “Chicano brown” color. Victor Cordero, of Cordero Pinstriping in Chula Vista, CA, pinstriped fine lines before airbrushing murals depicting Rick’s daughter and deadly revolutionaries on the tank and saddlebags.

Proof that nothing can stop a Texan from a good time—not even severe humidity.