Newsletter
Sign Up today for our FREE Newsletter and get the latest articles and news delivered right to your inbox.
Home » 1963 Chevrolet Impala – Midas Touch 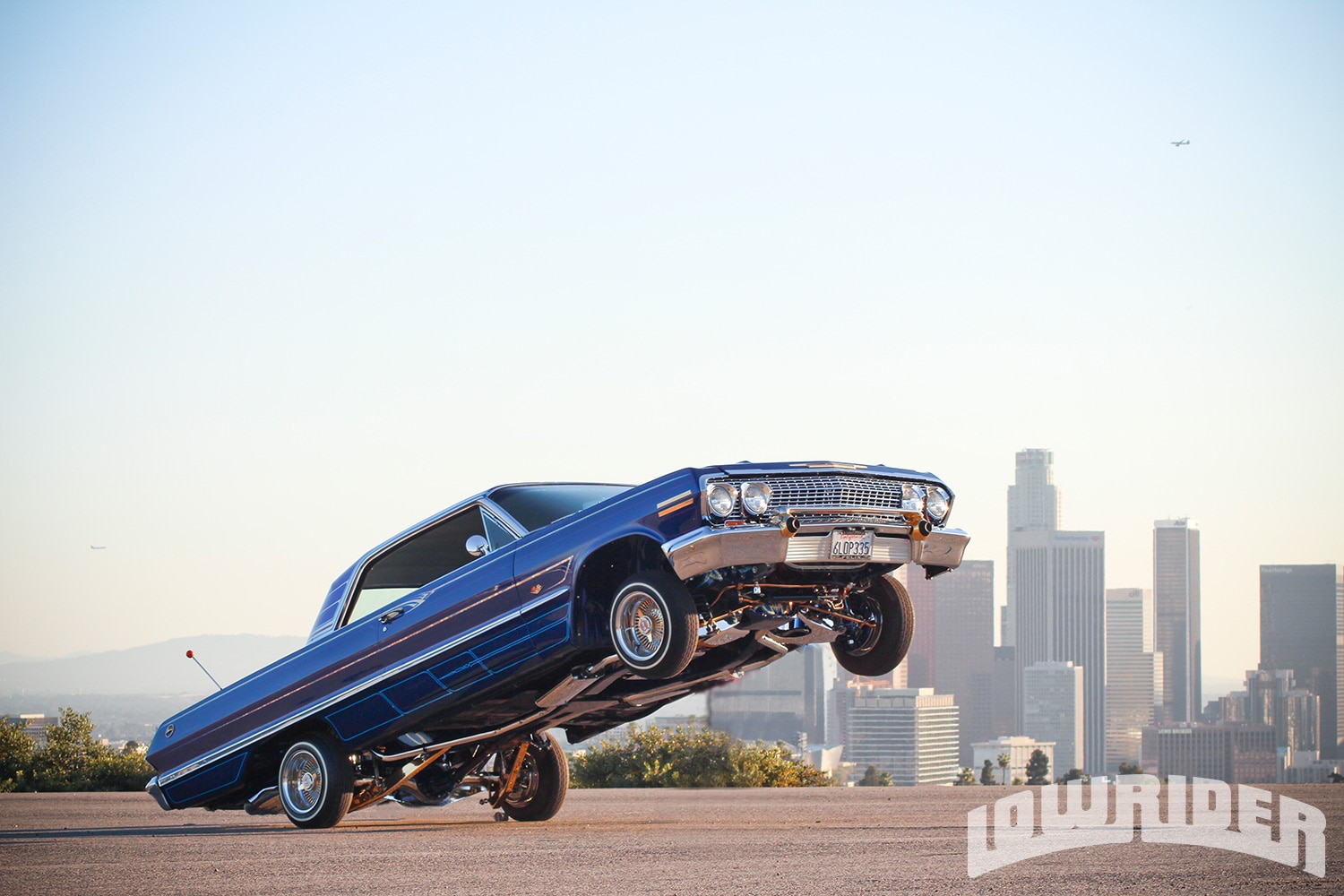 Having been bitten by the lowrider bug before he was old enough to drive, Mario Martinez of Oxnard, California, has had a lifelong love affair with the culture. Lowriding model cars kept the young boy’s interest for a while, but unlike his peers who graduated from the model cars to lowriding bicycles, Mario just skipped that step and went straight to the fullsize cars. Cadillacs were Mario’s make of choice and it wasn’t long before he built a ride that was worthy of a feature in Lowrider magazine in 2005. The Caddy that was featured was built for cruising the streets, but still sported customizations that were worthy of pulling awards at the car shows.

After a few years, friends kept bugging Mario to see what he could do with an older classic ride, like a ’63 or ’64 Impala. The idea intrigued him, and eventually the opportunity came to give it a shot when a friend offered to sell him a ’63 Impala for a mere $2,500. Once the deal was done and the ride was at his house, Mario decided to build it with the goal of it becoming yet another self-proclaimed show-stopping street-cruising machine.

King Midas, popular in Greek mythology, was known to have the golden touch. Apparently, everything he touched turned into gold, hence, the well-known slogan “trust the Midas touch.” Mario gave his own touch to the ’63, as well, spending over a year-and-a-half building it up and managing the customizations, mostly done through his carefully selected sub-contractors.

Mario’s fellow Klique car club member, Peter, is also the owner of Anaheim Plating in Anaheim, California, so Mario kept Peter busy by bringing him countless suspension and engine parts to be chromed-out or gold plated. The outside of the ride was given a new makeover with a fresh paintjob by Sergio, out in Oxnard. The engine was rebuilt and dressed up in chrome thanks to Juan Cuellar, and M&M Hydraulics added a cool three-pump setup, allowing the Impala to lay low, lock up, hop, or be in a three-wheel motion stance.

Mario says his ’63, known as the “Midas Touch” was built for the car shows and the streets, making it possible to have the best of both worlds. Mario loves to take it for an oceanside ride or hit the local cruise spots. He gives big thanks to Juan, Augi, Sergio, and Chico for all their help in getting the Impala up to par. Mario also gives special thanks to his wife, Linda, and the couple’s two sons for their loving support. Mario may be done with this ’63, but he’s already working on his next ride. He is returning to Cadillacs and this one will be a green flaked-out big body … stay tuned!

Engine: The stock V-8 327-cid engine with Edelbrock carburetor was paired up with a 350 transmission. The Engine builder was Juan Cuellar, of JC Auto in Bakersfield, CA.

Body/Paint: Jesse a.k.a. “Smurf” took on the bodywork before Sergio laid down the intricate paintjob consisting of a Spectrum Blue PPG finish with candy patterns on the roof and multi-colored patterns on the hood and trunk. Renowned pinstriper Mike Lamberson of Riverside, CA, finalized the look with fine lines.

Interior: Antonio over at Roman’s in El Monte, CA, took on the interior needs upholstering the OG patterns on the seats and door panels. The interior also features a candy flake painted dashboard with a Dakota digital dash display.