Newsletter
Sign Up today for our FREE Newsletter and get the latest articles and news delivered right to your inbox.
Home » 2003 Harley-Davidson 100th Anniversary Edition Heritage Springer – It’s A Dream 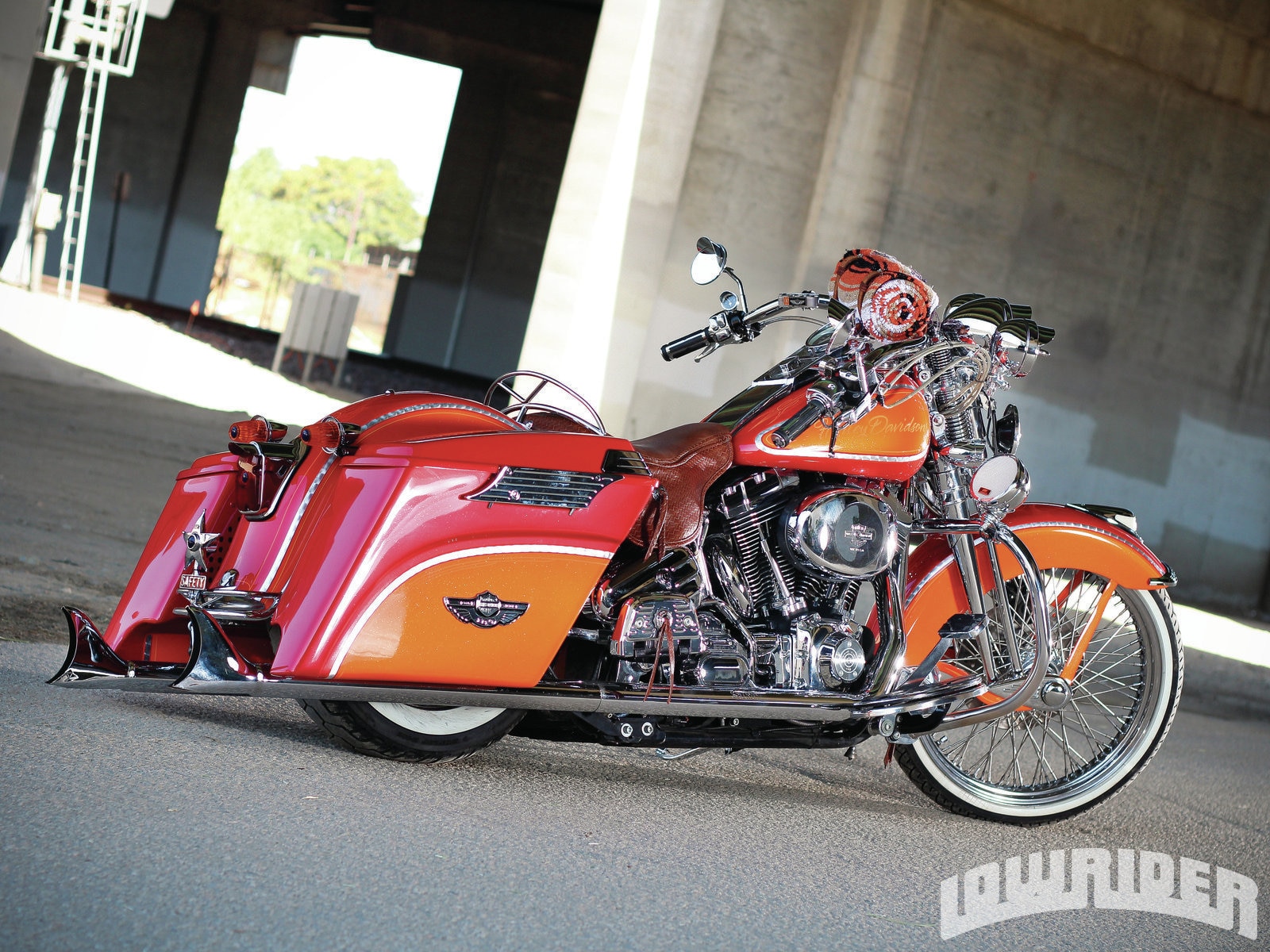 Les Ray from Colton, California, is no stranger to the deep-rooted L.A. lowriding scene in Southern California. Back in 1976, he actually rolled down the infamous cruise strips of East Los Angeles regularly and was apart of the legendary Lifestyle Car Club. He and his brother Joe seemed to have lowriding imprinted into their genes as they both grew up lowering cars, cruising the streets, and hitting the local car shows every year.

Les may have had cars, women, and beer on his mind for the majority of his life, but there was no denying that he also had a fascination for motorcycles too. He enjoyed checking them out at the car shows and out on the streets, but just wasn’t quite ready to make the jump from four wheels to two.

Finally in 2003, the interest in bikes seemed to finally overcome the “Hopper” and he went out and bought his first bike. It was definitely different from building up lowrider cars, but at the same time, there were many similarities, too. Candy paintjobs, spoke rims, and lots of chrome seemed to fit right in with the crossover, but the open air when cruising down the boulevard was a new experience that seemed to liberate Les on a whole new level.

When he was given the rare opportunity to purchase an ’03 Harley-Davidson 100th Anniversary Edition Heritage Springer, he knew he had to jump on the chance instantly. Not only was this bike the commemorative centennial model, but it was also the last of Harley-Davidson’s springer line of bikes.

It wasn’t long after Les had the bike in his possession when he was approached by an eager buyer to take it off his hands. The potential buyer offered Les close to $50,000, which was about twice what he paid for it. The money sounded great, but Les knew the personal value of this bike meant a lot more to him than the cash. After turning the buyer away, Les began customizing the bike, creating a one-of-a-kind head-turning motorcycle.

Les absolutely loved his bike and would ride it just about everywhere on a daily basis. Unfortunately, tragedy struck one day when a driver of a passing car cut over in front of Les, causing him to T-bone into the vehicle and fly off the bike over the handlebars. Les was seriously injured with broken ribs, among many other injuries, which kept him in the hospital for over a month. The bike was badly damaged but was salvageable. Ultimately, Les made a recovery and the motorist who caused the accident admitted fault and had a good insurance company to take care of Les. The medical bills were all paid for and the bike was given a full makeover.

This latest edition of his bike, now known as “It’s a Dream”, (Neil Young) features a new two-tone paintjob consisting of a candy persimmon and candy tangerine color scheme outlined with silver leafing done especially for him by his cousin Bugs in Arizona. Although the bike looks complete, Les says he constantly adds new accessories and changes it out all the time.

Les sends big thanks to his brother Joe Ray, Bugs Arizona, Armando of L.A. Baggers, Jerry A. Mojica, the staff at Pomona Valley Harley-Davidson, and his partner Henry “Wolf”. Les also gives a special thanks to his wife, Cathy, and his mom, Chole, for putting up with him and all the time he has spent away for his Harley.

Body/Paint: “Bugs Arizona” of Bugs Auto Art in Mesa, AZ, did all the necessary body prep work before laying down a unique array of candy and pearl paint finishes in a persimmon and tangerine color scheme. Silver leafing was also added for eye-catching accents. The saddlebags were upgraded to the HD hard bags and also painted, and the handlebars were upgraded to the cruising style beach bars.

Suspension: Armando of L.A. Baggers in El Monte, CA, installed an airbag setup allowing the bike to raise and lower and the hit of a switch.

Tires: Metzeler whitewall tires (21-inch in front and 16-inch in back).

It is said that we are all a product of our environment. Tim Muniga of Chino, California, is a prime example of this saying. For him, classic cars, mini-trucks, and Harleys have always been a family tradition.

What better way to honor the influence Dad had on your hobbies than to continue it with your own?

Most people who own a bike of this caliber might opt to garage it but not Paul and Kim Stierle. They like to ride their bikes and see the looks on people’s faces when they drive by.