Newsletter
Sign Up today for our FREE Newsletter and get the latest articles and news delivered right to your inbox.
Home » Stretched Beach Cruiser – Loud, Long And On The Ground 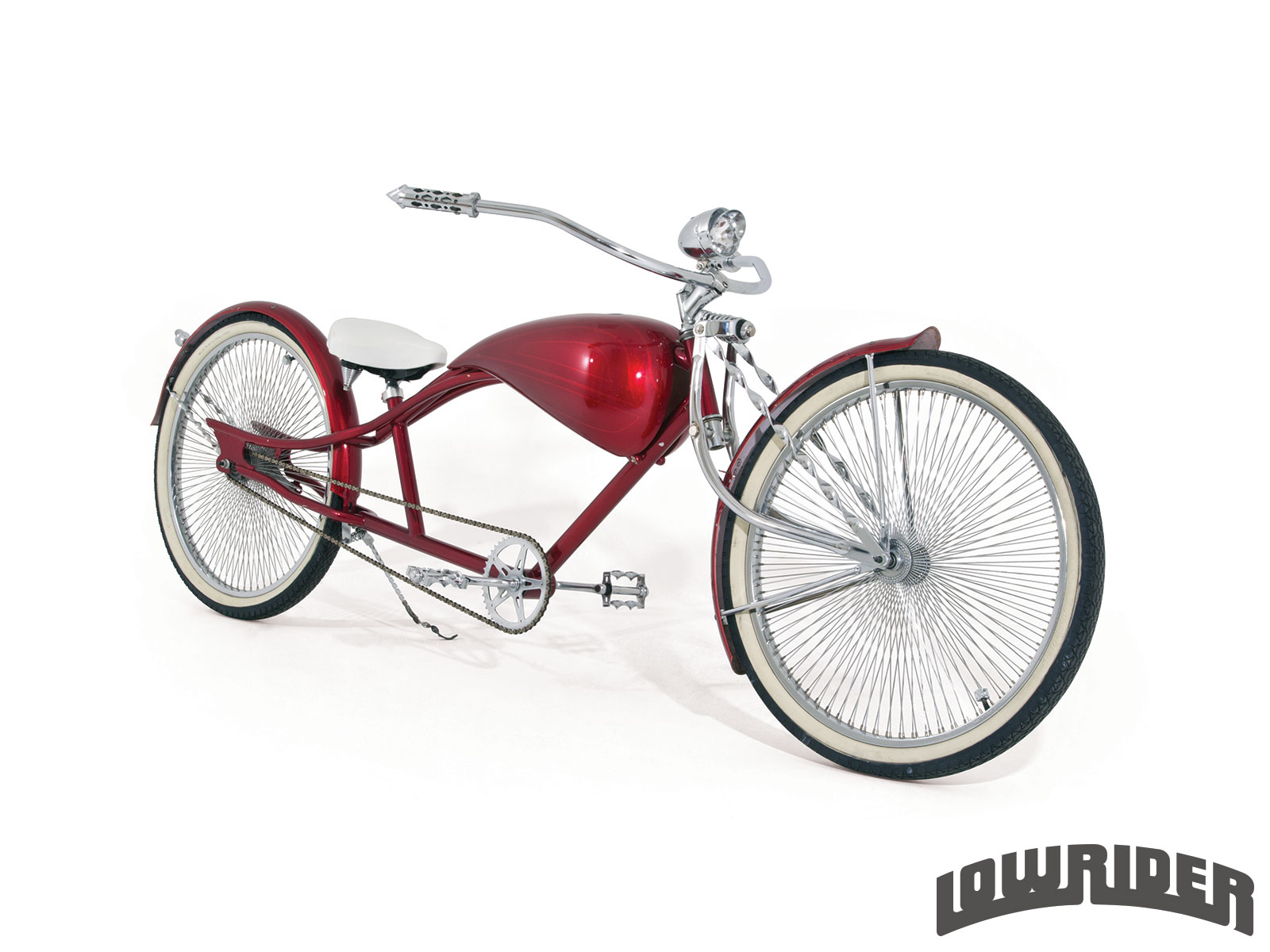 Every area has its own staples and cultural centerpieces, and if you live in Huntington Beach, California, those staples come in the two-wheel forms of bicycles. Thanks to the yearly influx of tourists and cars, it can be all but impossible to cover ground without one. No matter your style, it’s all about being seen; whether it’s cruising up and down the beach or parking up next to the local bar. You have to have a nice bike in HB or you’re just not one of the cool kids―period.

This particular bike actually started out as a full-on pink girl’s bike; complete with a flowered seat, tires, and tassels. The looks and hollers I got while riding it were sometimes good, but more often ridicule, at least until I began to make plans to modify it. I just knew that something had to be done to make this bike cool, so I enlisted the help of two teenage brothers named Oscar and Louie Contreras. The brothers are staples at the world famous Buddha Paint, where Louie is an expert when it comes to the two-wheeled peddlers. The first stop was a few exits up the road at the Santa Fe Springs Swap Meet. Tucked in the back of the meet is a bicycle shop, which has all the twisted iron and chrome you need at super cheap prices. Immediately you will find the raked forks, beach bars, headlights, taillights, and twisted pedals available to be purchased and ready to be installed. The Buddhas’ specialty is motorcycles and a billet set of grips was “borrowed” from a customer who was late in paying for a job. After a quick parts makeover, the bike was looking better; but was still a horrible shade of pink.

Jim Le, co-owner of Buddha Paint, had a couple of fiberglass gas tanks lying around the shop, and while visiting one day, I was able to convince Jim to let one of them be used on the bicycle makeover. While staring at it, Jim flipped it over and noticed it was the perfect speaker box to add some tunes. He quickly got to work and fabricated a holder in the top of tank that was specifically made to hold an iPhone. Hidden in the tank, Jim mounted two rechargeable speakers that power the music duties.

Finally, the bike was ready to shed its pink skin in favor of something more masculine. Late one night, Long Le locked himself up in the shop with a full pack of cigarettes and a super-sized energy drink and got to laying tape. After hours of flake, paint, and sanding, the transition was complete and the bike was ready to hit the streets of HB.

The maiden voyage was overwhelming and I couldn’t go more than a few feet without someone stopping to take a picture of the bike or ask where the music was coming from. Over the course of the summer, the bike gained a reputation as the unofficial king of HB bikes. After a year of serious riding up and down the beach, the bike earned its fair share of scratches and scrapes. Regardless, on the days when the sun is out, you can most likely catch me riding this cruiser up and down the beach—even if I’m not riding very fast!