Newsletter
Sign Up today for our FREE Newsletter and get the latest articles and news delivered right to your inbox.
Home » 1996 Harley-Davidson FLSTN Heritage Softail Nostalgia – Cholo Chop 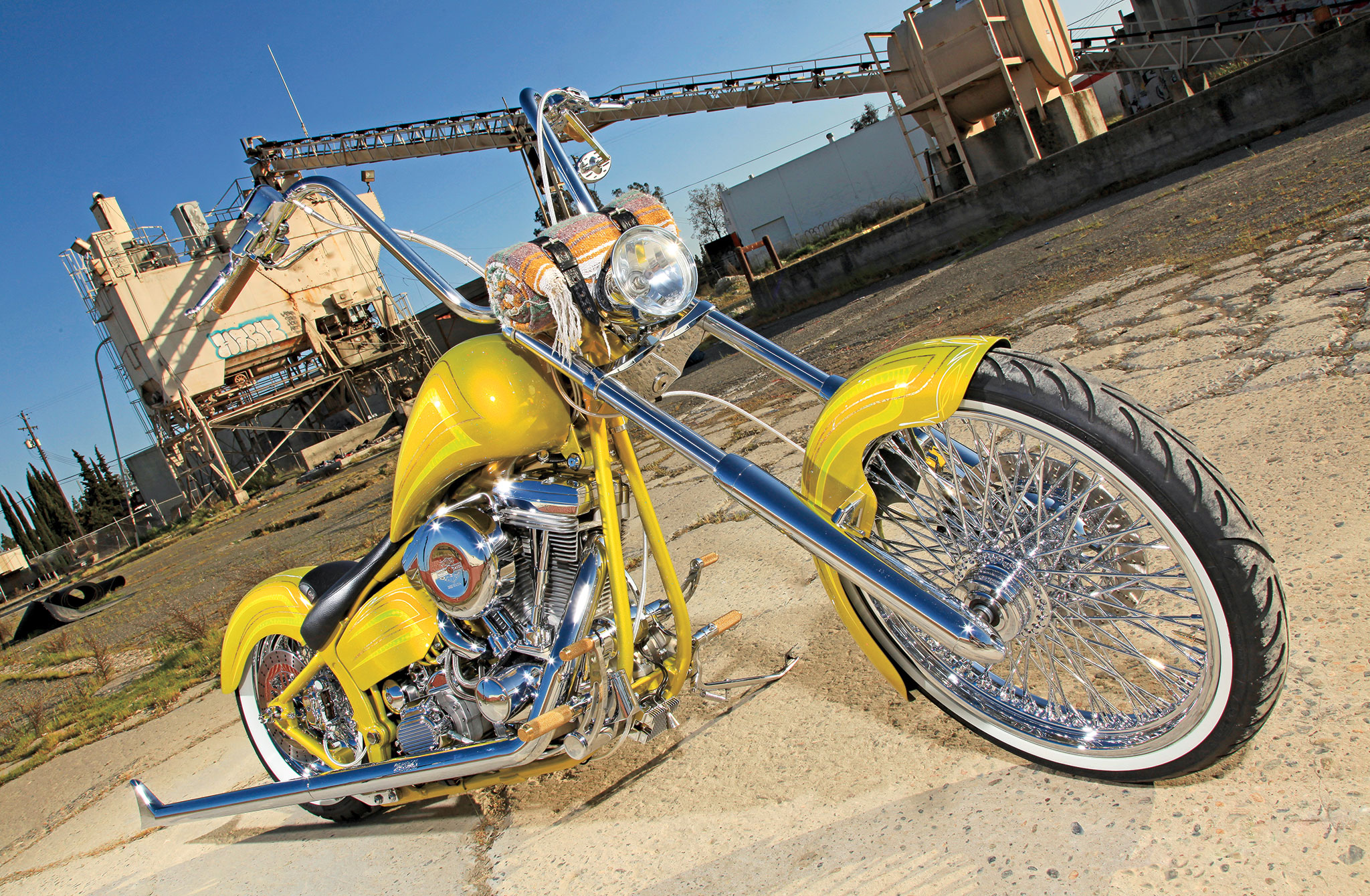 It only takes a glance to realize that Rudy Alba’s ’96 Softail is unlike anything before it. On paper it doesn’t add up: A Heritage Softail with a big rake, tall apes, open primary, 80-spokes, a Drag Specialties tank, and a chopped Long Shot rear fender. But the finished product is proof that even the most unlikely of parts lists can produce a bad bike if you have the know-how and vision to make it happen.

“I was the Cholo who was different in school, I hung out with my homies but I also played on the golf team while wearing my Pendleton and khakis,” Alba laughingly said. “I was always a little different and have kept that uniqueness through all the lowriders and Harleys I’ve built over the years,” he added.

When he says a couple of cars and bikes, he means a ’69 Impala and a ’78 Coupe De Ville along with a Bagger and a ’60s Triumph chop-the dude’s legit.

“I waited a year for my Heritage to be delivered back in ’96, and I’ve put over 60,000 miles on it since,” Alba said. “It’s also seen three different iterations before arriving at the finished bike you see here,” he explained.

In the decade and a half he’s owned the Heritage, Alba has taken the bike from a stocker to a traditional Chicano-style rider and eventually into the completed custom before you. It didn’t stay stock for long, as Alba started with plenty of chrome covers, 60-spokes wheels, and chrome pipes. He even ditched the front brake. When that wasn’t enough it got some high bars and its first custom paintjob, but that didn’t last long when Alba hit the pavement on a wet day.

“All I had was the rear brake and when I tried to stop, it locked-up and started fishtailing so bad it kicked me off and destroyed the entire side of the bike,” he said.

With insurance settlement in hand, Alba setout to build the bike he’d always wanted; something different, unique, but with cues from different styles of bikes. Since the frame was bent, instead of rebuilding it to factory specs he had The Frame Man add 39 degrees of rake along with a Pro One 41mm Wide Glide fork with 6-inch extended legs to match the 7-degree raked triples for a total of 46 degrees of rake.

“I shaved and smoothed the entire frame and swing arm, anything unneeded was removed- I wanted it to look clean and smooth,” Alba said.

Speaking of clean, have a look at the tidy lines, what you won’t quickly notice is the internally strutted and shortened rear fender, the Hi-Lo rear air suspension with hidden tanks and the many relocated and equally unseen buttons, fuses, and unsightly connectors. Furthering Alba’s desire for perfection, the gauges were ditched in favor of a clean cockpit and the entire frame; swing arm and tins were painted House of Kolor Candy Lime Gold with a Pagan gold base and Chameleon flake by Rebel Designs. It was then treated to proper amounts of gold- and silver-leaf pinstriping as a final touch.

No cruiser is complete without a proper motor so the Evo was punched to 95 inches with some Andrews EV27 cams and ported heads. Alba painstakingly stripped the black paint from the motor and added plenty of chrome before the Roadmax open primary belt and Samson 39-inch Cholo pipes joined the party.

The devil’s obviously in the details, but what many can’t get over is how Alba made the American Wire Wheels 80-spokes and Avon white walls look at home with the serious rake, Drag Specialties tank, the Russ Wernimont fenders and the Chubby 16-inch ape hangers.

“I consider it a hybrid since I didn’t take one particular style, but instead I blended a little bit of the things I like, the Chicano, chopper and old-school styles,” he said.

And like he does, because as clean as this chop might be, Alba isn’t afraid to ride it, having logged thousands of miles since it was finished.

“We build them to ride, not to sit in the garage, I know I have some rock chips you can see up close, but that’s what happens when you ride ’em.”

Special thanks: To my dad, Paul Paca, for the inspiration and for introducing me to the world of motorcycling, and my family who have supported my passion with motorcycles.