Newsletter
Sign Up today for our FREE Newsletter and get the latest articles and news delivered right to your inbox.
Home » 2007 Harley Davidson Deluxe – Zarape 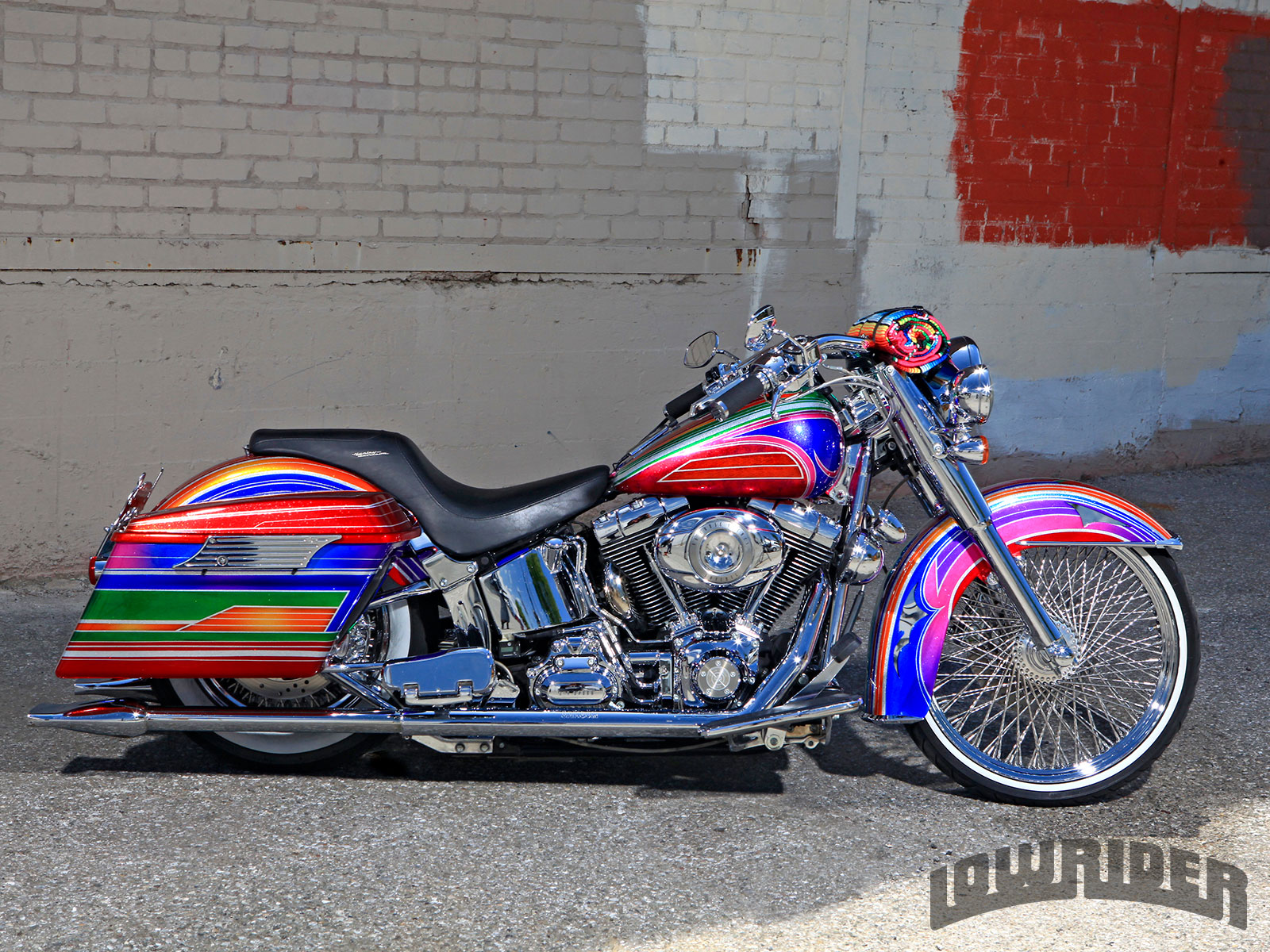 When Eric Chavira of San Jose, CA., was nine years old, he used to cruise Story and King with his friend, Bert Flores, who had a ’79 Cougar. The memories are still as vivid today for Eric. “I enjoyed cruising with Bert and his club, Low Conspiracy, in his lifted car,” he says. “Back then, we used to go to Disco East at night and the parking lot would be full of Lowriders.” His passion for the Boulevard also grew to include the two-wheelers as Eric got older. He was a fan of riding street bikes in the ‘90s, but after a wreck, he decided to sell it. It had been almost a decade since he had ridden a bike when he and his wife decided that they both wanted to get a Harley Davidson. The bike was purchased in 2007 and a year later, he started working on customizing the bike. “I put in a little sound system and had a paintjob on it with some ghost graphics to have a Lowrider style while keeping the Harley look,” Eric explains. While the bike looked great, it was a fateful reconnection that pushed it over the edge. He ran into old friend, Freddy Alfaro, with whom he produced an art event called Art and Chrome. “Years ago, I wanted him to paint my Caddy and once we hooked up again, we talked about having him paint my bike,” says Eric. “I told him that I didn’t care what he did, all I wanted was to have tons of colors on it.” Later that same day, Eric started to strip the bike down, sanded it, and prepped it for Freddy. “It seemed like we stayed up everyday for forty hours in order to have it ready for Laughlin. I rode it all the way there, freshly out of the paint booth.” In October of 2012 Eric made another trip, when he decided to ride his bike all the way to Las Vegas for the Lowrider Magazine Super Show. Unfortunately he got into a small wreck on the 58 just outside of Bakersfield. The bike received damage to the front wheel, bent rim, bent handlebars, bent lights, scraped tailpipe, and damaged front fender but that didn’t keep Eric from making it to the show. More importantly, we are glad that no one was seriously injured in the small wreck and that Eric will be able to keep riding. Eric would like to thank his love, Cynthia, as well as Freddy Alfaro, Chuch David Ledesma, and his son, Moose, for all the help in putting the bike together.

Body/Paint: Cal Mex did the bodywork and Freddy Alfaro, at Nor Cal Customs, in San Jose, CA., sprayed it with multiple House of Kolor Candy paintjobs.