Newsletter
Sign Up today for our FREE Newsletter and get the latest articles and news delivered right to your inbox.
Home » 2005 Harley Davidson Road King Police Special – Fresno’s Finest 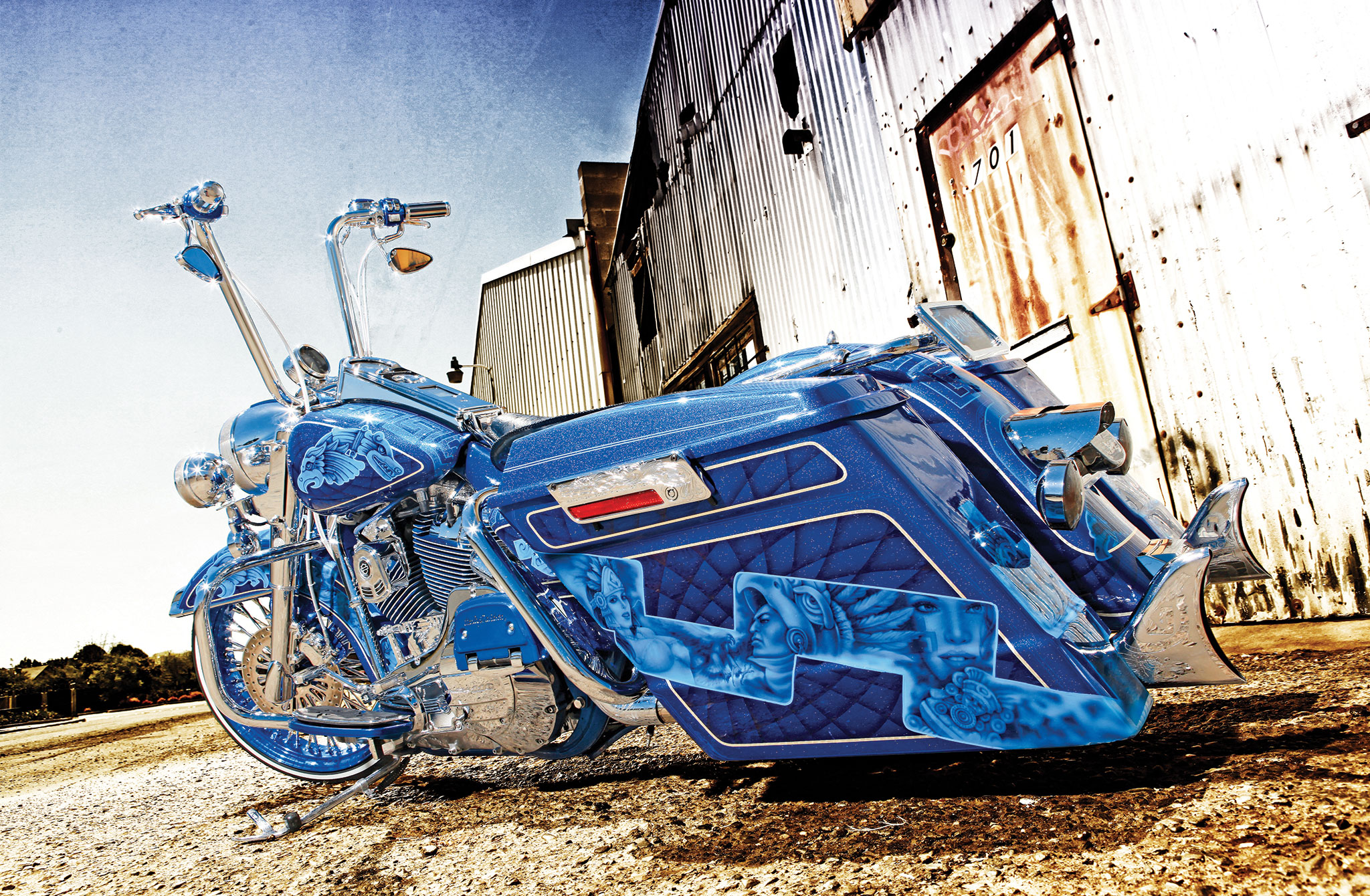 Since the first motor was mounted to a bicycle over a century ago, bikers and the local law enforcement haven’t always seen eye-to-eye. Nothing waves the one-finger salute to “the man” more than a loud V-twin roaring down the road. Ironically, since 1908 cops have been chasing the bad guys perched atop those very same motorcycles. When Albert Sanchez purchased his Police Special Road King in 2005, even his son wondered if he had forgotten to tighten all his brain bolts. “When I got the bike it was a black and white Police Special. At first I wasn’t going to buy it because my son was with me at the dealership and said, ‘Dad, you’re not going to get that funeral escort bike are you?’ I explained to him, ‘It might look like a funeral escort right now, but when I’m done it’s going to look a whole lot different.'”

Some thought Albert was trying to be a wolf in sheep’s clothing but in reality he chose this model for some very specific reasons. “I’ve been riding about 25 years now and never been on anything else but Harleys. I’ve had friends with rice rockets but I would tell them ‘One of these days you’re going to graduate and get yourself a Harley. Besides, if I hit anything I want to make sure I see what I hit.’ I chose the Police edition for the bulkiness of its front. You can do more with it.”

It wasn’t long after the purchase before the first round of additions began. In Albert’s case, the first time wasn’t the charm and the Road King has since gone through several transformations. “I’m not the type of individual that likes to leave things alone. This is actually the second paint job. The first was candy blue and silver leaf without murals. I kept that paint job for a year and half but I wasn’t fully happy so I tore it down again. I mean I wouldn’t send my daughter to the prom wearing the same dress twice, right?”

Murals and paint schemes can either make or break a bike depending on their execution. When asked why he chose to change the paint Albert explained. “You get used to a paint job and have a lot of good memories with it. But I’ve always wanted to go with an Aztec theme. I saw a similar idea on a ’64 [Impala] with a really nice Aztec pattern and thought it would look great on a bike.”

Despite being a consistent show winner, the tall pieces of plated plastic were never the reason for the transformation. For Albert, it was more about the memories that were made and the people he met during the shows and outings. “Trophies are nice but they don’t make me. At the Super Show in Las Vegas this past year, I saw a gentleman on his belly taking pictures of my bike. We started talking and he said ‘This is quite different than what I’m used to. I usually shoot photos in the wild.’ It turned out he was a photographer for National Geographic. It blew my mind. That’s what I mean about meeting interesting people when you’re out there.”

Thanks: My family for the support, Erica my other half, Albee my son and especially my Dad. This photo shoot is for you! R.I.P. Alberto Sanchez, Sr.