Newsletter
Sign Up today for our FREE Newsletter and get the latest articles and news delivered right to your inbox.
Home » 1999 Harley Davidson Road King – Paying Respect 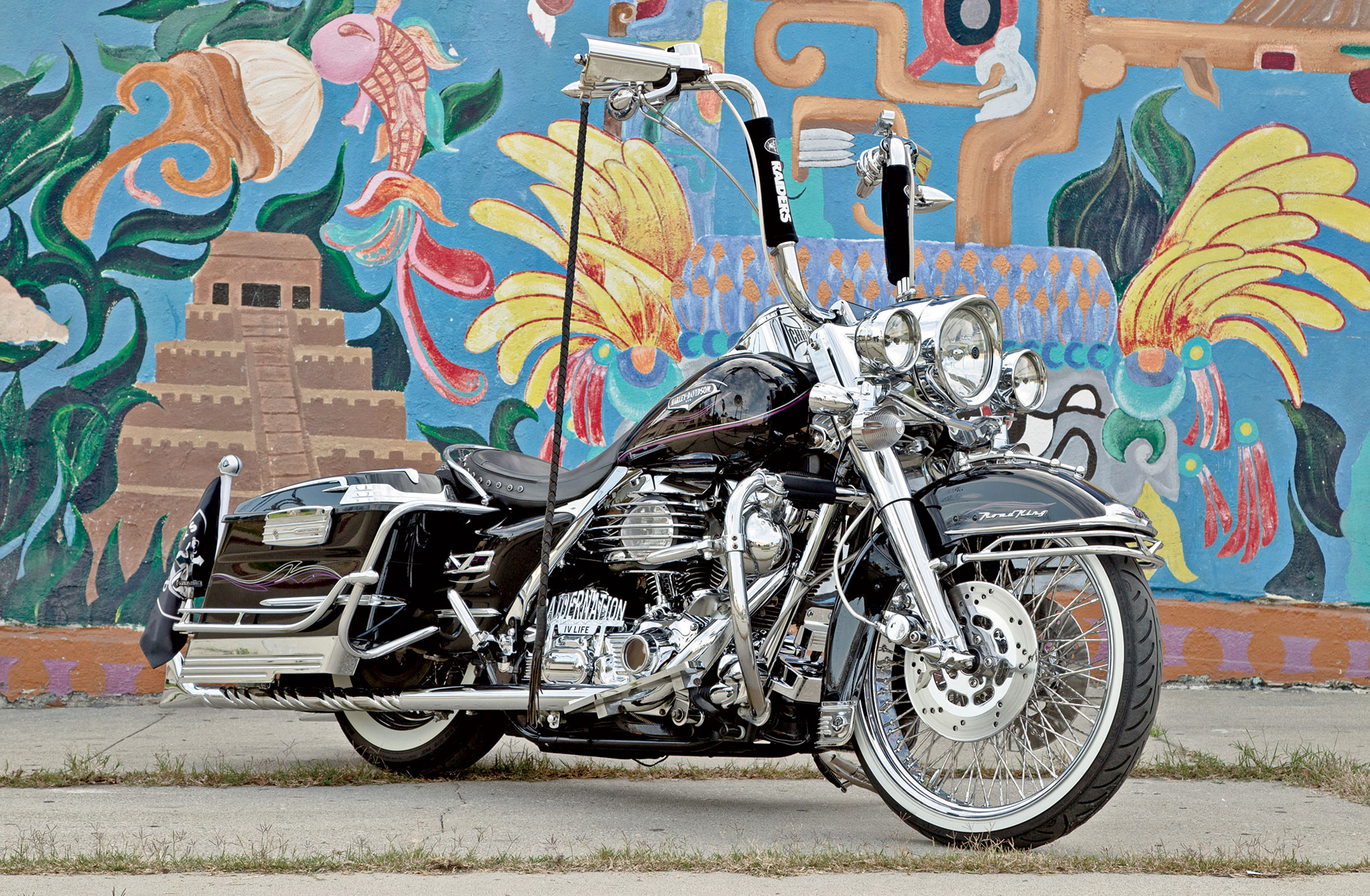 To most, a vehicle, be it a car or bike is simply a mode of transportation, but to some it’s a tool of expression, a way to bond with family and even a way of life. For Lencho Ambriz, a guy who’s been building lowriders since the 70s, his 1999 Harley Davidson Road King represents a new chapter in his long list of mechanical selfexpressions.

“Almost 10 years ago I was a spectator at a Skip Fordyce Harley’s Memorial Run and I remember my heart was heavy because of all our fallen brothers,” Lencho said. “I wanted to celebrate and ride for everything they had done, so it inspired me to build a bike,” he added.

Instead of creating a wild custom or an all-chrome killer, Lencho turned to his years of building lowriders to construct a unique combination inspired by the depth of his character.

“I wanted something that was Chicano to represent my heritage because it’s something I’m proud of and I show it through my cars and bikes, but I also needed it to be old school and clean,” Lencho said.

With that, he set out to capture the essence of a bike from the Barrio, a Vicla, but with old-school flavor. A 21-inch spoked front wheel set the Road King in motion and a 16-inch roller smashed out back. Gangster whitewalls, a black and gold plate, a vintage siren and matching horn along with Cadillac taillights and twisted pipes with fishtails gave it the right touches. But it didn’t stop there.

“I added the 2-foot apes, it’s Homie style with your head up and your hands up, it reminds me of when I was kid riding my Schwinn,” he explained.

Other easily overlooked details include the custom solo saddle with rails and the hints of chrome and black perfectly blended together.

“Being a member of a car club, I grew to appreciate the strict technical rules and the specific build guidelines, it taught me how to keep things simple, clean and shiny,” Lencho said.

No Vicla would be true without a slammed stance and an Air Ride kit brings this hog down on the deck, while other touches like OG pinstriping and tons of chrome replacement parts give it some contrast against the midnight paint.

So it’s one part Vicla, one part old school, but where did the Raidernation influence come from? “I always liked the Raiders, but when I saw the fans getting a bad rap, I wanted to be apart of the Raidernation to set an example and show we’re good people,” Lencho said.

Lencho had enough knowledge from his deep roots in the lowrider scene to know what works and what doesn’t. But as powerful as the finished bike is, the passion and the love behind it runs even deeper.

“This bike is a way of showing my pride for my heritage, a way to ride and be proud,” Lench said. “This is the stuff we share with our families and passed down through the generations, some day our grandchildren will hold a picture of us and say, ‘my grandfather rode a Vicla and that’s why I ride, too!

Thanks: First to my Lord God, my daughters Kristal and Vanessa for being my main supporters and to my N.B.C.C. brothers, especially my mechanic Tony Malama (RIP), Galindo and Sons Cycles, Fineline Cycles, Road Dog Customs, CycleSmiths and Gorilla Cables.

Lowrider Garage will go live and on the road Friday, April 17,  @ 5 on Instagram, as we travel out to Mike Lopez (Twilight Zone) New Life Garage.