Newsletter
Sign Up today for our FREE Newsletter and get the latest articles and news delivered right to your inbox.
Home » 1997 Harley Davidson Road King – Life in the Slow Lane 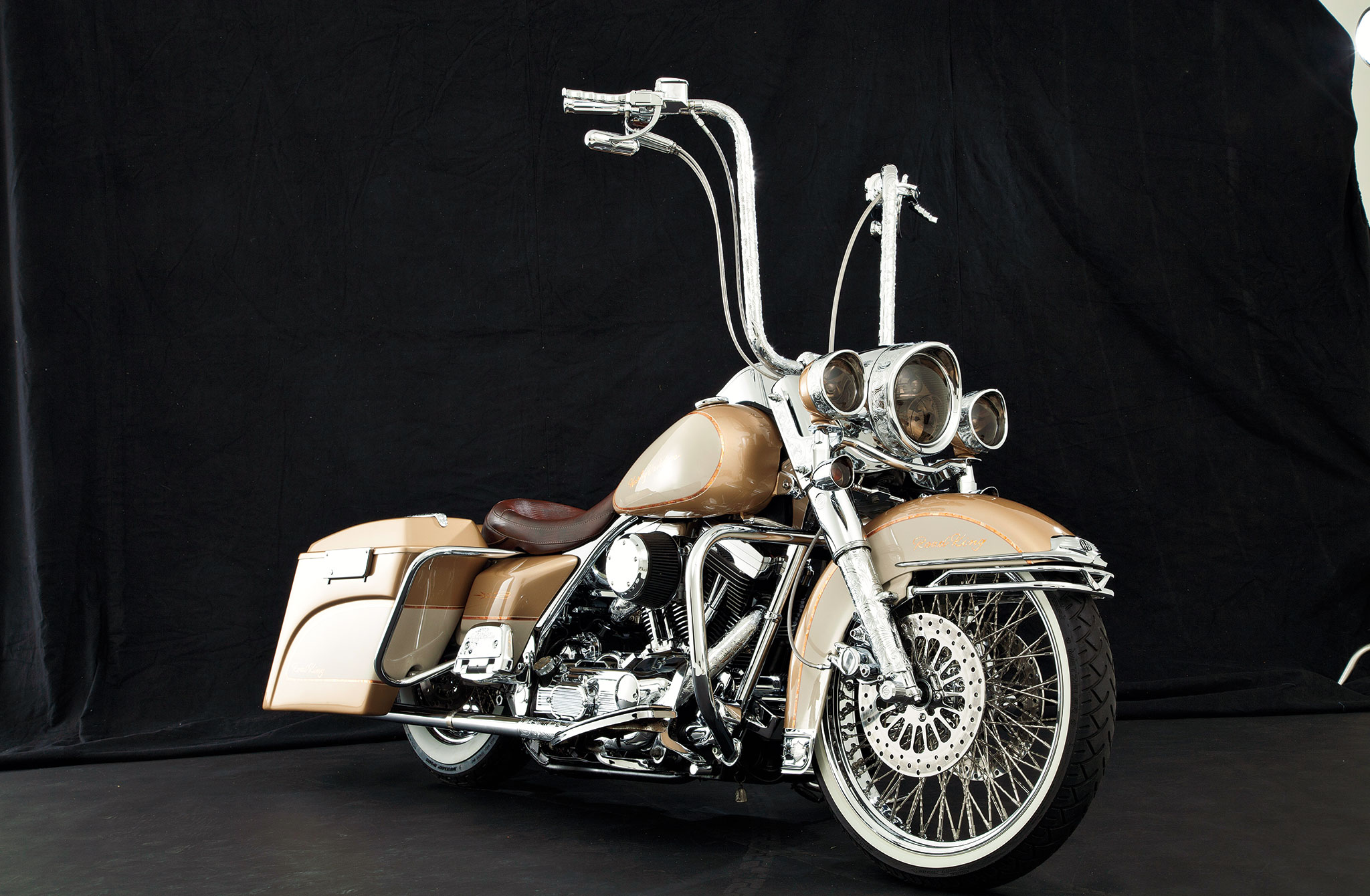 As long as chicks dig bikers, men will keep buying motorcycles. When we’re young we think we’re invincible. We believe nothing can harm us and the cost of looking cool has no limitations. Eventually though, after a few skips and bumps down the road, after the wounds have healed and the bank account has taken a beating, we take a step back and reevaluate the whole “wild and crazy” life.

The road to maturity wasn’t without mishap for Frank Torres either. Frank started his riding career screaming around on a sportbike and is no stranger to being a two-wheeled terror. “I bought my first streetbike in 1998. I was a typical streetbiker getting into accidents and causing problems. I was just too irresponsible.”

But once a biker always a biker, and not wanting to leave the world of two wheels forever, he decided to slow things down a little by looking to other sources for his adrenaline fix. “I started building show bikes, which helped calm me down a bit. I also had my lowrider that exposed me to a lot of Harleys. It planted the seed in my head and in 2008 I bought my first Harley.”

Style and lowriders are synonymous and the cars and the culture had a big impact on Frank. “The lowriders were a big influence on me. I always liked cars and it seemed wherever there were Impalas and Chevys, there were Harleys.”

But it seemed that the curse of Lady Luck exited from the fast to the slow lane along side Frank. After only a few months of owning his Road King, that’s when the mishaps began. “Every time I’ve rebuilt my bike it hasn’t been voluntary. First the motor blew three weeks after I bought it. I guess the bike wasn’t as mechanically sound as the seller made it seem.” With the motor torn apart, Frank used the downtime to upgrade and rebuild. A few months later he was dealt another blow to the budget, as a minor spill presented another opportunity to upgrade the paint. “I had a small accident and it rashed up both sides of the bike. It was all cosmetic, but instead of repairing just the parts that were damaged, I tore the whole thing down again.”

While apart, Frank upped the ante with a trip to Hernan’s Engraving for a cut of some class. “Anybody can build a bike that’s all chrome. There’s nothing wrong with it, but you start blending in. The same person that likes lowriders also likes these types of bikes. I wanted my bike to look like an old ’46 Chevy. I was trying to build something with a nostalgic feel. That’s why I went with only a little bit of engraving and the colors (I wanted something that looks like it was nice in the 70s and still looks good today.) I just wanted to capture a few eras of lowriders and Harleys.” All the struggles brought both Frank and the bike to a better place and his motorcycle will be a class act despite the trends that come and go. And as we all reminisce about the war stories from our youth, never forget, chicks will always dig scars.