Newsletter
Sign Up today for our FREE Newsletter and get the latest articles and news delivered right to your inbox.
Home » 1974 Harley Davidson Shovelhead – Old’s Cool 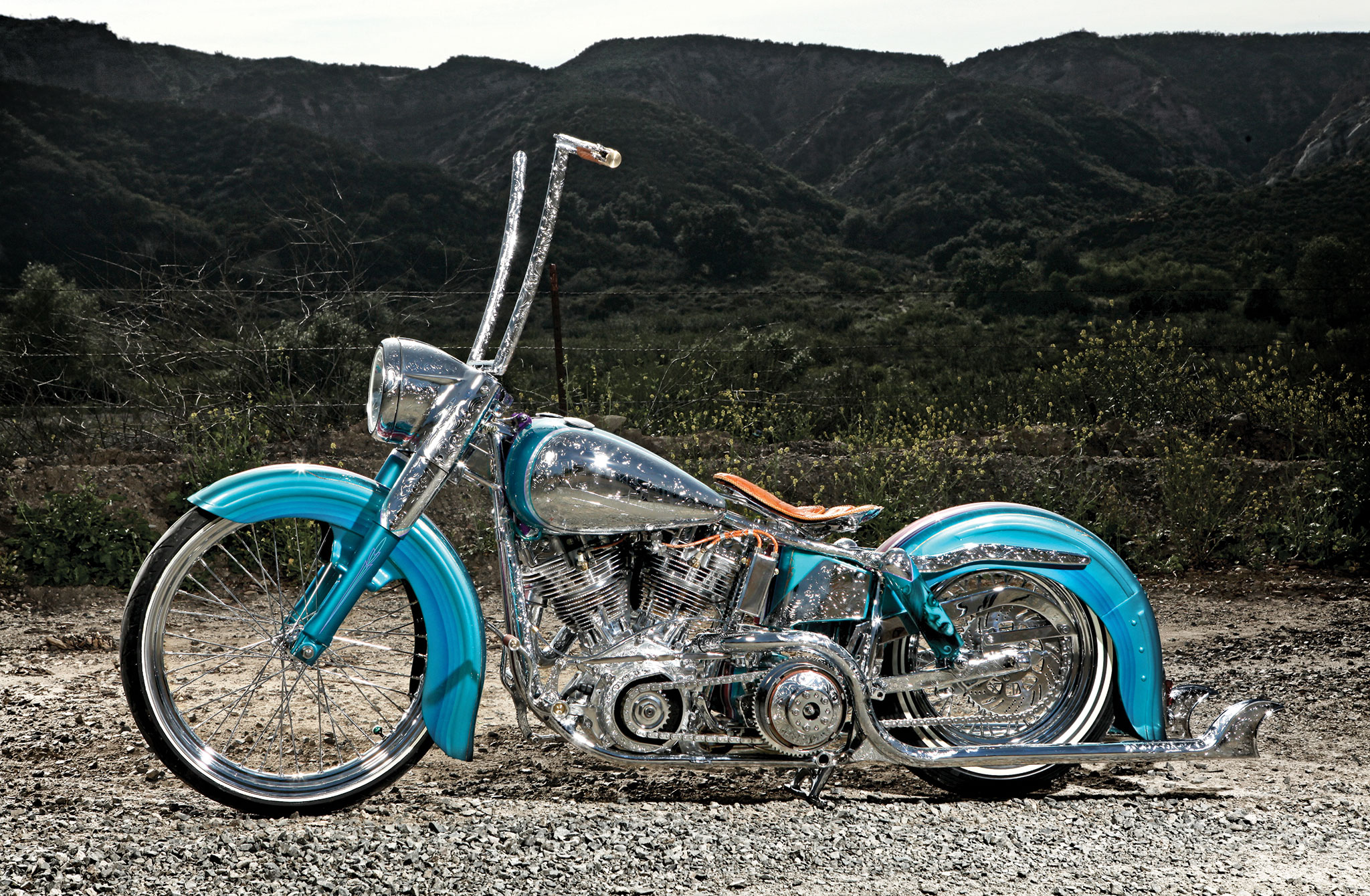 Is it possible to recreate the look and feel from a bygone era using a modern machine using entirely new parts? Is it better to have modern reliability or learn lessons the hard way by continuously breaking down on the side of the road like old bikes do? For bike owner Daniel Sosa, of Phoenix, Arizona, and bike builder Justin Coleman, of Torch Industries, the answer to all these questions is a defiant no. Daniel is a firm believer that in order to be considered a true lowrider, a bike needs to start with an old soul. “We started out wanting to build a lowrider bike. I noticed a lot of bikes coming out and they were all brand new. I’m not saying you’re not a lowrider if you’re on a brand-new bike. You have traditional lowriders and radical lowriders, but all traditional lowriders are old. For example you wouldn’t roll up on a Chevy Tahoe on 13x7s with gold pumps—no way! But in the bike world it’s different. You can pull up on a Bagger with a 21-inch front wheel, some regular apes and pipes and call it a lowrider. We looked to the top cars for inspiration and to us that was El Rey, it wouldn’t be El Rey if it were a 2003 Impala. If it rolled up on 13x7s, no one would even pay attention to it. It would be pushed to Lowrider Euro style magazines with the other new cars,” Daniel said.

Roughly five years ago, Daniel and Justin hit the digital sales lot to find the perfect bike to build. Rather than spend the kid’s college funds at the dealer, Daniel started with a 1974 Shovelhead. He explained why going old was the only way to go, “It’s not like a brand new bike we financed, then went through a catalog and picked out a bunch of parts. The bike is a ’74. My bike just has more soul and more heart than the newer bikes. That motor has been through a lot. It’s seen a lot of shit.”

The bike they started with is a far cry from the bike you see today, as Justin explained. “We started looking for a cone Shovel because the generator case has more of a broad side. We eventually found the bike on Craigslist and paid $3,900. It had a Reaper with a dead man’s hand airbrushed on the tank—the guy we bought if from looked like Hank Williams Jr.” Justin laughingly admitted.

With a torch, a flat head and a hammer, the two immediately got to work. “If the previous owner saw the bike today he would be pretty upset. He had just had it painted and the first thing we did was remove the paint. It was in running shape but in desperate need of a tune-up. It had the factory electric start, blinkers and all the good stuff before we stripped it all down to a kick-start only. The first paint job had almost two pounds of blue metal flake—it used to be called ‘Refried Dreams,'” he said.

After a few years of riding flaked-out, it was finally time for a complete makeover. But this time, there was no holding back. “There’s a lot of things that people won’t notice, like that the rear fender is off a ’47 Knucklehead and it’s stretched nine-inches. We used all cloth wiring and it runs inside the frame. The air compressor and the valves are hidden in the right side of the gas tank. The front wheel has fewer spokes and is a little bit larger than stock but it still has the original look. He (Daniel) always says it looks like a Ferris wheel,” he said.

Like the crazy wheels, the rest of the bike wasn’t an accident either. “The whole bike was a collaboration of the parts we thought looked best. The goal was to do as many subtle details as possible and make it something that you had to look at 20 times to notice every thing,” Jason explained. “We could have bought a fender, but in our opinion it’s not really custom if you order it—we got that vision from Chip Foose. He wants every car he builds to look like it hasn’t been touched and that only a real car builder would know that it’s been tweaked as much as it has. Like the Foose cars, every time you walk by our bike you catch something new,” Daniel said with a grin.

Like it or not, the battle between old versus new has and always will continue to rage. But to Justin and Dainel, the winner is crystal clear. “Most people don’t get it because it’s old. We got a lot of people that hate on it, but that’s good too. We don’t think we are going to change the game or anything, we just hope that people hate the bike so much that it makes them think the next time they consider an older bike.” Score one for the old guys.

Paint: House of Kolor Candy Teal over a custom base, Pinstriped by Ron Hernandez, Murals by Lee Diaz

Special thanks: To Torch Industries, my family, friends and Auto Renew for saving the paint.

Blood, Sweat and Gears
In just a short 10 months, Torch Industries along with the help of bike owner Daniel Sosa transformed a $4,000 used 1974 FLH purchased off Craigslist into a show winning cover bike.