Newsletter
Sign Up today for our FREE Newsletter and get the latest articles and news delivered right to your inbox.
Home » 2006 Harley Davidson Road King – History Repeating 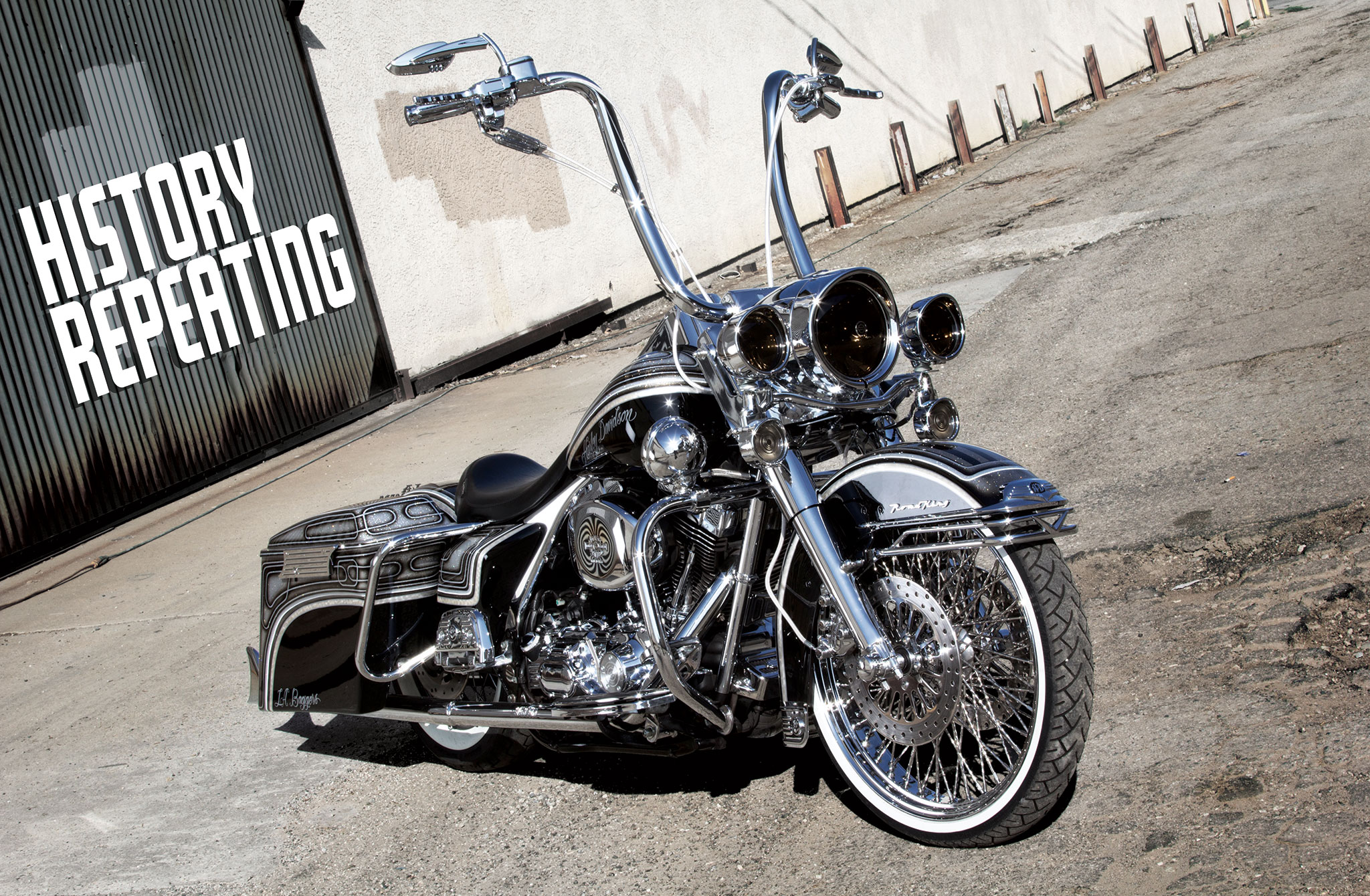 Living in the past is often thought to be a boring, mundane, or otherwise useless way of life to many; especially in regards to motorcycle customization. Those that share this view fail to realize that the past is actually a great source of inspiration and it is only through the understanding of the past that one can create a new future. Sure, some are born into this world and accept it as it is, intimidated and unmotivated to risk failure for the sake of change and innovation. Jason Luevanos is not one of those people. Instead, he’s on the other end of the spectrum; a person who relates to that strange breed of people who immediately seek a way to change, modify and alter anything that crosses their path. Whether it is customizing a car or motorcycle, for some of us, there is an inner need to modify for the sake of modifying. That said, restless hands can often create extraordinary things and Jason’s 2006 Road King is a perfect example of this, and serves as a testament to what an understanding of the past can do to add style and substance to a more modern machine. Jason’s Road King was bought on a whim, but the bike is far from his first custom. “My first car was a ’68 Camaro that I started building at 16. That’s when I learned to turn wrenches. Later on, I bought a 1955 truck. I hit every show scene I could over the years with that truck. Though I’ve been riding since I was a kid and always wanted a Harley.” Fate would finally intervene on behalf of Jason’s Harley Davidson dreams. “Two years ago, on New Year’s Eve, I got a call from a buddy who was selling his bike that was like new and in close-to-stock condition. I called my wife and told her ‘Hey I bought a bike.’ I figured it was easier to ask for forgiveness than for permission,” Jason said with a laugh.

It wasn’t long before that custom twitch started to itch that Jason began to scratch. The bike started out solid white, which presented itself with a peculiar problem. “I rode it for two weeks and everyone who saw me on the bike thought I was a cop because it was all white,” Jason explains. “So it wasn’t long before I took it in to paint it solid black. That’s when we started selling the long bags at LA Baggers.” Jason’s design had more influence than he realized. “Turns out Harley sells a lot of black bikes and I got a ton of clients that wanted me to make their bikes look like mine. That was cool and flattering, but I still wanted my own unique bike. That’s what pushed me to paint it.”

In many cases, achieving the best custom work means trusting and leaving the design up to the artist so as to not be overbearing in direction. Putting his trust in Bondo from 8 Ball Rod and Choppers, Jason only had a few instructions. “I told him I wanted an old school Lowrider look that you normally don’t see. Bondo took it from there. When I first saw it, I wasn’t sure if I was going to like it or not. When you first see something like that with no clear on it’s scary. Once they put the clear on, I still wasn’t sure if I was going to like it. But once the bike came together I loved it.” The finished piece combines a little bit of new school look with some old school soul.

With the paint in good hands, Jason turned to another essential part of the build; he had to have his tunes. As a practical rider, he wanted to make sure he could keep his eyes on the road as well, so some innovation was in order to make controlling his musical options as safe as possible. “Advantage Audio and Alarms figured out how to wire up the factory hand controls to work with the iPod without the stereo. He actually had to rewire a remote to make it work with the full functions.” The idea went off without a hitch, and by combining a little bit of new school technology hidden underneath an old school skin, Jason’s Road King learns from the past while rewriting the future.

Paint: Bondo from 8 Ball Rods and Choppers used a two-tone silver and black with leafing

Special thanks: The crew at LA Baggers, 8 Ball Rods and Choppers, for the whole body and paint and Advantage Audio and Alarms for the sound system.