Newsletter
Sign Up today for our FREE Newsletter and get the latest articles and news delivered right to your inbox.
Home » Custom Oakland Raiders Themed Schwinn Frame – Raider Nation 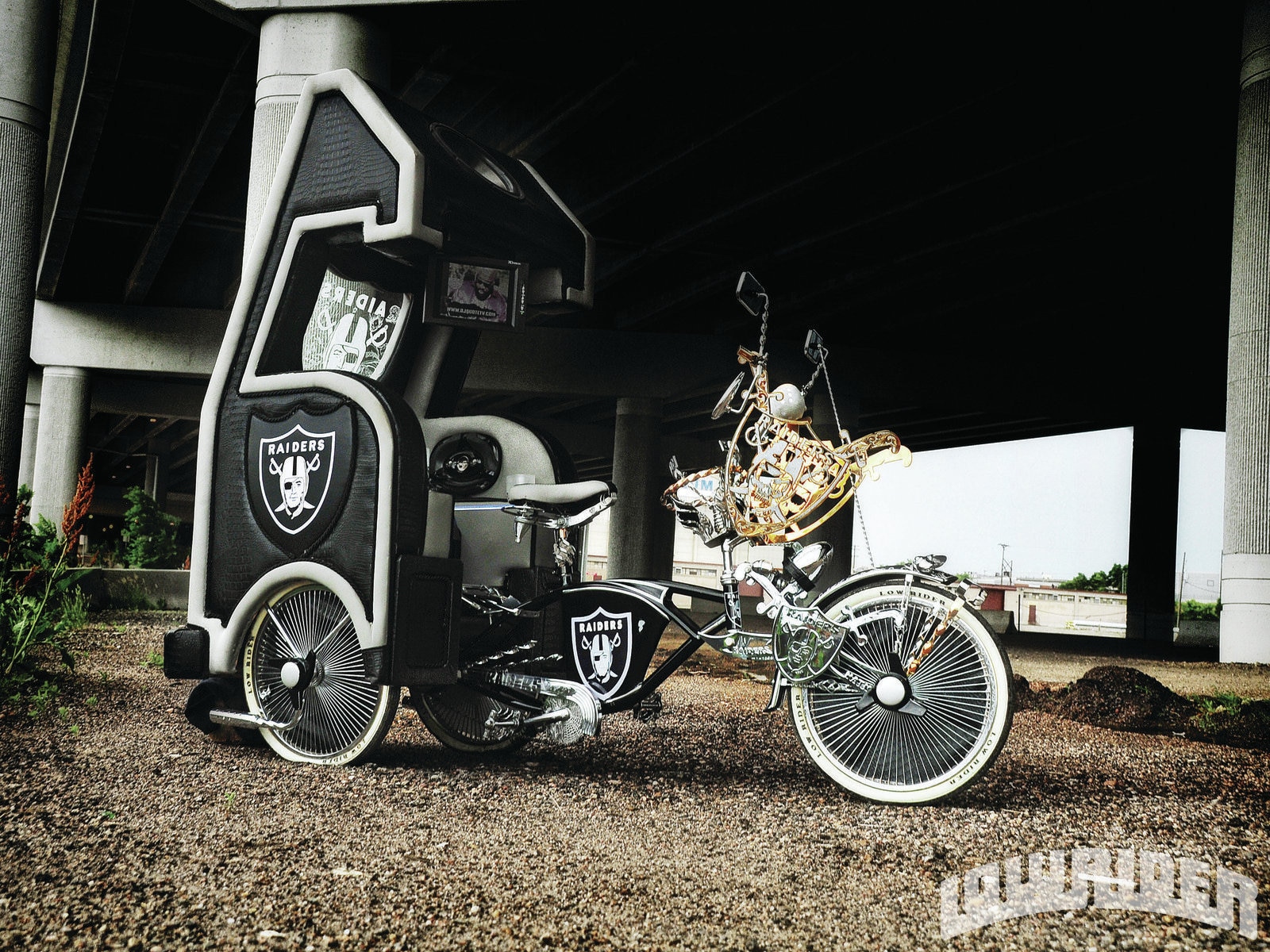 Carrying on tradition is a huge part of Lowrider culture. Where we were is a big part of who we are, and those lucky enough to pass that on to their offsprings help to complete the circle. While some of us eagerly pass our torches, others are persuaded to do so by a youngster who willingly wants to learn. Such is the case for David Cante, a young Lowrider Bike builder from Aurora, Colorado. As a nine year old, David Cante came across some pictures of his father, Mauro, in his younger days in California. It offered the youngster a glimpse into his father’s proud past, a past that included the love of two things, The Oakland Raiders football team, and Lowrider bicycles. The insightful David immediately brought the photos to his dad and asked if he could learn how to make Lowrider bikes like the ones in his father’s pictures. For David’s tenth birthday, his father found a Schwinn frame and the father-son duo worked hard to create the masterpiece that is now known as Raider Nation.

The elder Cante was delighted that his son had taken such an interest and even more delighted at the theme his son had chosen for the bike. He committed time and resources into helping make his son’s dream come true. Every week, new parts were added but the most radical change came when David saw his first trike and insisted that their new project go the radical route. Knowing they needed to make the conversion from two to three wheels meant finding a trike kit, which they did at Dragon Lowrider in Denver, Colorado. As a resident of Aurora, Colorado, the ambitious David took his half complete trike to the Denver Lowrider show where he met Juan Flores, a member of a Midwest Customs Bike Club in Colorado. Within months, Juan taught David that even more custom touches could be added to his project, and David kept pushing his build even further with the knowledge.

The Oakland Raiders theme remained, much to the delight of David’s father, Mauro. Mikey from Midwest Customs laid down a paint scheme with Raider logos, while David, himself, added etching on the metal to set the trike apart from the rest. Raider emblems were cut at Krazy Kutting in Arizona and added. The tribute to his father’s past and favorite team was taking shape, but it was not quite finished by David’s standards.

For the final touch, David and his dad built a tailgate-type rear end, complete with televisions and speakers that would make any other football fan jealous. David and his father have built one of the finest creations in Colorado and the two spend countless hours deciding what their next addition will be while they enjoy their favorite sport together. Builds like this one serve as reminders that Lowriding can have such a positive impact and serve as a bonding thread between generations. Way to go, David and Mauro! Excellent work.