Newsletter
Sign Up today for our FREE Newsletter and get the latest articles and news delivered right to your inbox.
Home » 1957 Chevrolet Bel Air – Capital Punishment 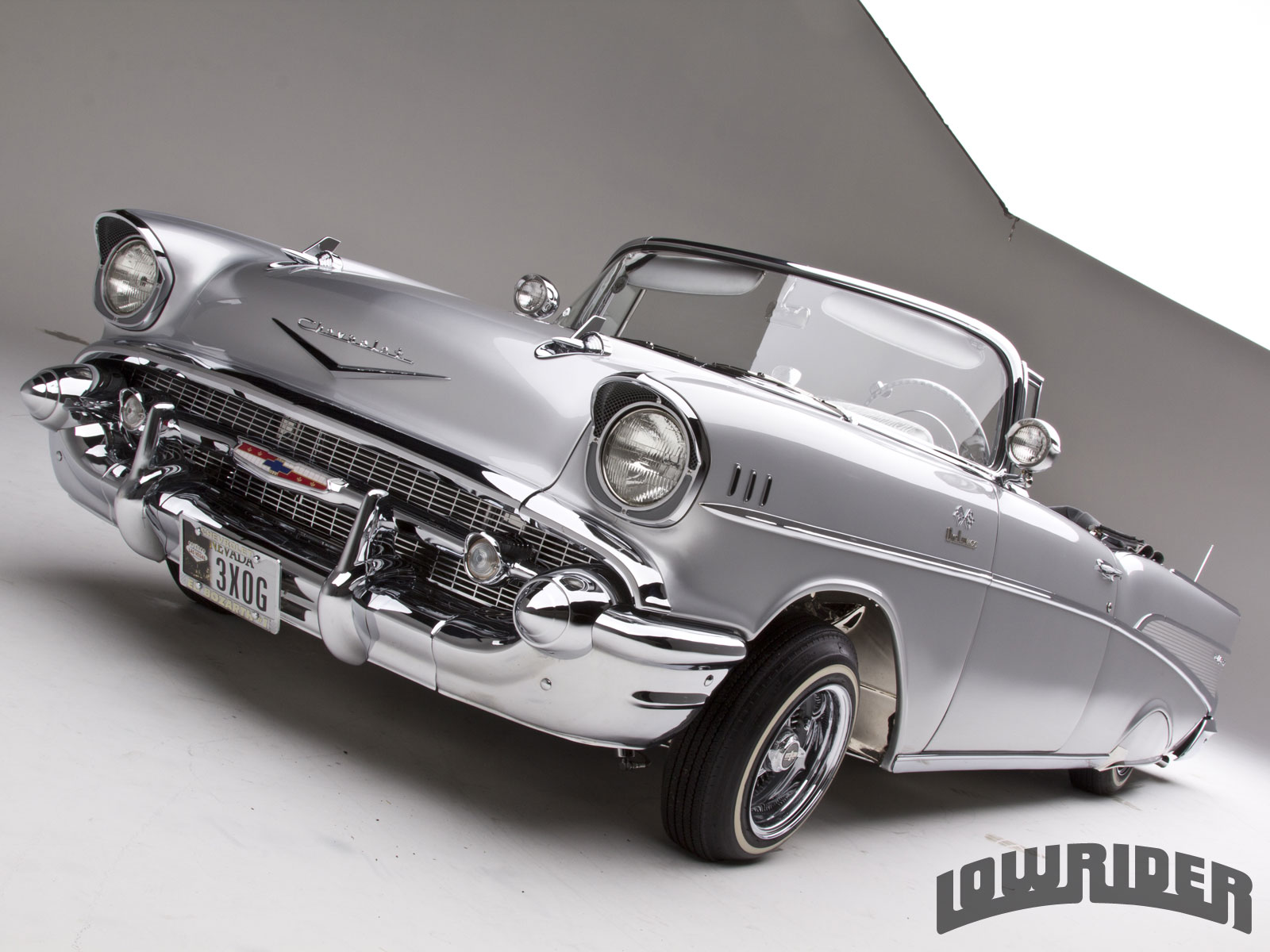 If there ever was a hybrid of custom cultures, Jim Brown’s 1957 Chevy Bel Air is a perfect example. Is it a Lowrider, or is it a Hot Rod, and what differentiates the two? While some things differ, some remain the same between the genres. Aside from obvious distinctions like the size of the wheels, it’s the care, persistence and added attention to detail that distinguishes Lowriders from Hot Rods or restorations. Expensive paint? Lowriders got that. Big motors? They got those too. Hard to find original parts? You’ll find those on them as well. That said, Jim’s ’57 Chevy is one hell of a Lowrider.

No other car is as iconic as the ‘57 Bel Air convertible. It is the definition of Americana and easily one of the most recognizable cars of all time. When asked why he chose this car to build a Lowrider, Jim’s answer was somewhat unexpected. “At one point, I thought about retiring from Lowriding. When I did, I wanted to retire with the best car I thought was available. To me its America’s car,” he says with a smile. Dipped in classic Silver from front to back, Jim’s Chevy appears to be straight out of the ‘50s as it passes from a distance. It’s not until after approaching the car when parked that the image changes. Jim is happy to elaborate. “I wanted it to be a combination of stock, while still being somewhat radical. When everything is closed, it has a nice mellow mature look. It fits more of my age and doesn’t look too crazy. When the car is at a show and I lift it off the ground, you see more of the radical side, which is really surprising to a lot of people.”

Upon closer inspection, the various hard to find original parts would easily have any “resto-nut” drooling with envy. “I wanted everything to look really old school, like a dedication to me getting out and a dedication to all the old-school riders who came before me,” he says. “I went with the old-school hydraulics. I also kept the battery racks simple, and I went with the Zeniths with the old-school knock offs. I had been saving these 5.20 tires for years, and was finally able to put them on this car. I also added the spot light mirrors and the 45 record player. To me all these parts were mandatory,” Jim states about his modifications.

With a click and pop of the hood latch, the car’s Hot Rod roots are awakened from their slumber. After a single pull of the accelerator cable, it’s apparent there is no stock 283 lying beneath the hood. Tucked in between the shock towers lies the belly of the beast in the form of a 2004 LS2, bumped up to 364 cubes, complete with all the go-fast goodies. All that extra power is pushed through a custom drive train including a 350 trans and Jaguar IRS.

With a flip of a switch to show mode, the car is transformed once again over to the essence of a true Lowrider. What isn’t chromed is painted, and what isn’t painted is engraved; but none of it is overdone as to take away from the classic style of the car. “A lot of people are shocked when they see the underneath of the car,” Jim says with a laugh. “They ask me about the rear end and ask me how I was able to chrome the entire floorboard; I’ve been fabricating my whole life so I have my tricks. The murals that you see are subtle. There are some on the dash and bumper kit. But once you get the car up in the air, you’ll see pictures of my old neighborhood, pit bull fights, palm trees, dogs, a school we used to hang out at, and women. It’s like a time line of my whole life on the frame of the car. When I did it, I wanted it to be the ultimate conclusion to my contributions for the Lowrider community.”

I will always roll on 13 inch wires, dripping fluid

Now that Jim’s ultimate ride is completed, he is starting to second-guess his plans to retire. With Jim, Lowriding is more than a lifestyle; it’s an addiction. “I saw a book in the library called “How to Divorce Your Car” that I wanted to read. It’s been something I’ve been doing all my life. I will always roll on 13-inch wires, dripping fluid,” Jim says proudly. He hopes that his build will inspire others but insists that his main motivation was his own sense of giving back to the culture that made him who he is today. “I want to give a shout out to Frank and Bengie,” he says, adding “this is dedicated to you, keep your heads up.”

Paint: Paint boasts a mixture of Gunmetal Silver and Grays, with murals of women and Jim’s upbringing by Alberto, pinstriped by Thurman in Los Angeles.