Newsletter
Sign Up today for our FREE Newsletter and get the latest articles and news delivered right to your inbox.
Home » Custom Trike – Dragon Fantasy 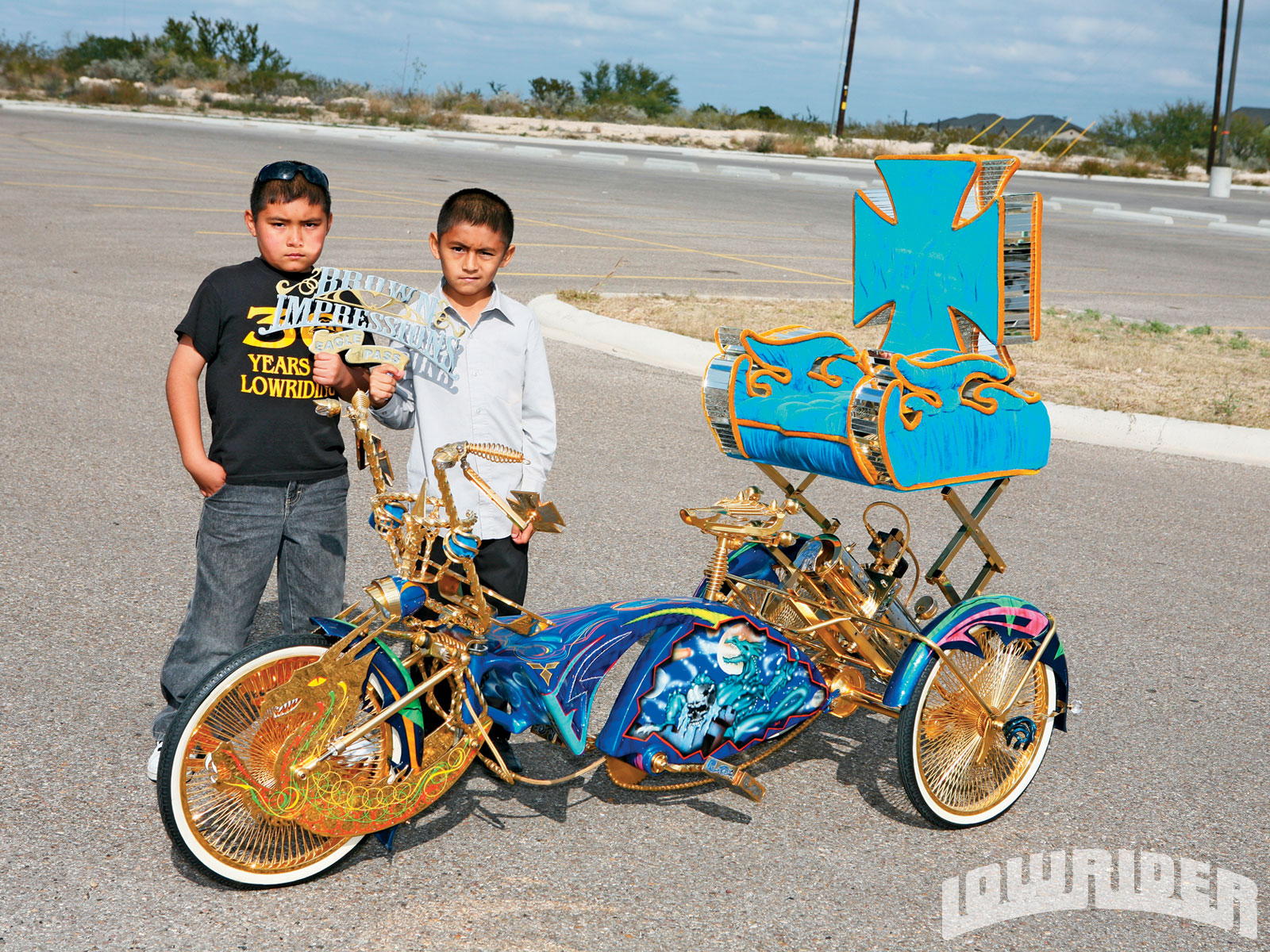 The Sifuentes family began their Lowrider tradition over 30 years ago, when they became affiliated with Brown Impressions Car Club. When Miguel Sifuentes was a little kid, he remembers cruising with his dad, an original member of Brown Impressions Car Club, from Eagle Pass, TX. Naturally, he got into building Lowrider Bikes, and his first project was a tricycle. He built the trike back in 1990, and it was fully customized with body modifications, paint, and murals of the late Tex-Mex singer Selena. After many years of being in the Lowrider Circuit, Miguel started to build a family on his own.

As happy as his Lowrider bike had made him as a child, Miguel knew that he wanted to introduce his kids into the Lowrider game as well. He purchased a 20-inch Schwinn from one of his friends, and with the support from his wife; he started to build another trike for his kids. The project started small but soon enough, he hit up his friend Isidro, from San Antonio, TX, to assist him in building the trike. After the body was done, Isidro took it to the next level by building a custom made 3-D tank. Miguel wanted to have a bike with a dragon theme, so he had Isidro and his friend, Chito, build custom parts for the bike. The forks of the trike were custom cut to look like dragons, and they are operated by a hydraulic pump to make them go up and down. The bike also got some upgrades in the form of custom cross petals, twisted handle bars, steering wheel, and a motorized seat rack. After all the parts were built, they were sent to Cortez Customs in Dallas, TX to become gold-plated and engraved. Once the trike had returned, Antonio Isidro blocked and primered the trike, painting it Royal and Oriental Blue with ghosts graphics. After the paint was done, it was delivered to Jet Escobar, in Eagle Pass, to lay down the murals of the Dragons. The final addition saw the trike handed down to J.C. to put on his final touches with an expertly done pinstripe pattern.

Two years passed after the trike was purchased and after a bill of over $9,000, the trike was ready to hit the show circuit. Miguel started to travel with his family and two kids, taking the time to hit all the major Lowrider Car Shows. The trike, named “Dragon Fantasy,” was incinerating the competition, taking names in many shows including San Antonio, Odessa, and the Las Vegas Super Show. The trike is still going strong, and now that his kids are older, Miguel is helping them build their own projects. Keep an eye out for the Sifuentes family, because they will be hitting the show circuit strong, representing Brown Impressions and Eagle Pass, TX to the fullest.