Newsletter
Sign Up today for our FREE Newsletter and get the latest articles and news delivered right to your inbox.
Home » 1962 Chevrolet Impala SS – Mystic 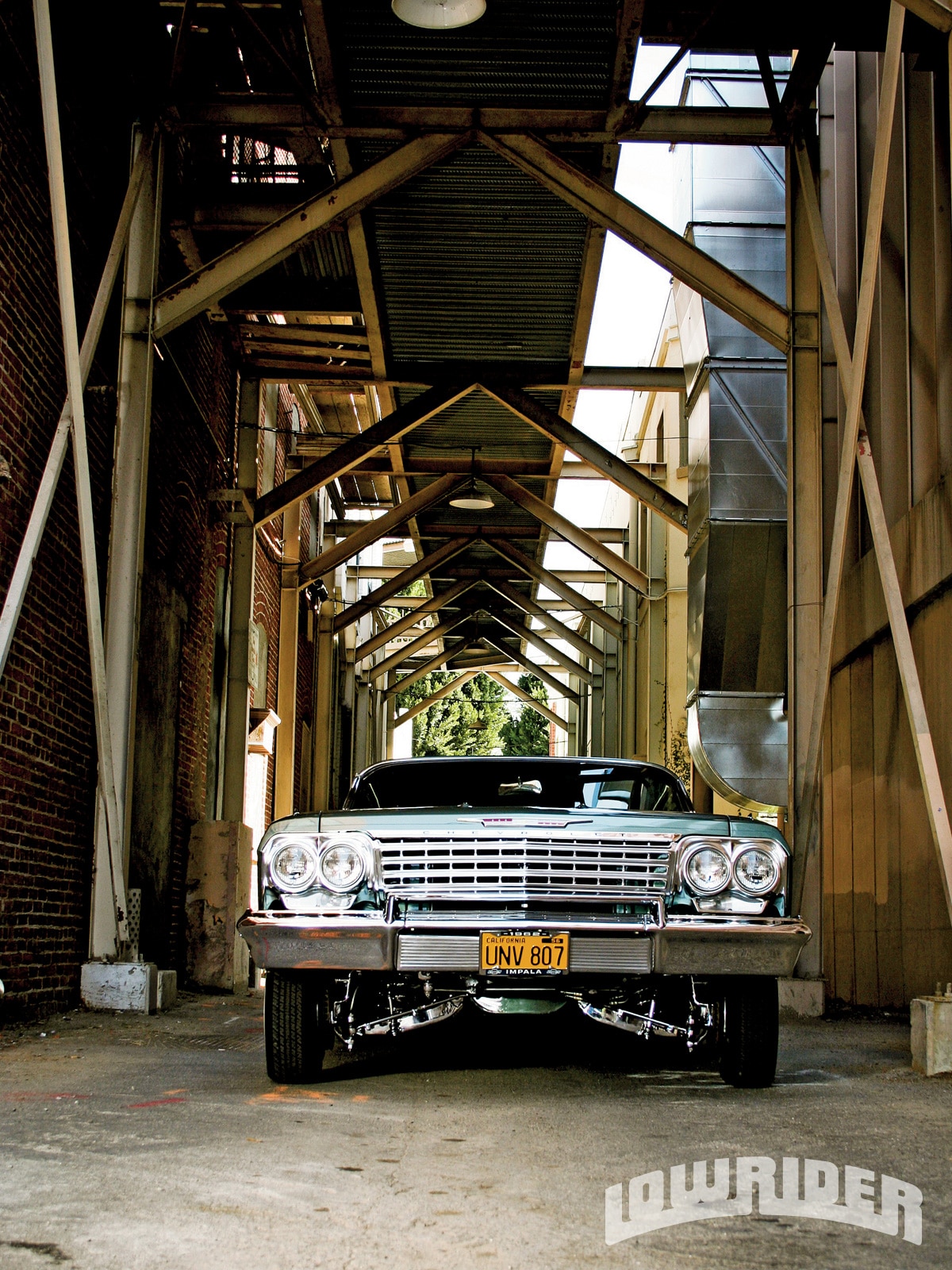 Joe Guzman of Anaheim, California, is a longtime member of the Orange County chapter of Klique Car Club. A perfect match for Klique’s notoriously high standards, Joe recently unveiled this clean green ’62 Impala Super Sport, appropriately nicknamed “Mystic.” Having been in the scene for several years, Joe considers the ’62 Impala model year a personal favorite, and he certainly put his foot into this one. From top to bottom, inside and out, this ride is nothing less than a show-stopping, eye-popping, low cruising machine! Even the engine and undercarriage sport chrome luster, thanks to the work of car club president, Pete Tapia, of Anaheim Plating & Polishing.Joe caught the attention of Lowrider Magazine while out on a short cruise in the six-deuce to Riverside, California, with friend and club vice president, Sergio Avila. Little did he know that this fateful trip would quickly become more than he bargained for, as Joe soon found himself in the right place at the right time. Jazmin Siguenza, the El Salvadorian bombshell who goes by the stage name “La Flora Venenosa,” was visiting from the Sacramento area of California, promoting her debut album, “The Poisonous Flower.” Joe’s ’62 immediately caught her eye, and she approached him with the idea of doing one big photo shoot on the spot. Combining Jazmin’s amazing beauty and “Mystic’s” big-body charm was a no-brainer, and Joe quickly green-lighted the idea. Hey, who could resist an opportunity like that?

Jazmin is one tough cookie, and a woman who wears many hats. Not only is she a hip-hop artist, she is also three-time national boxing champion, an actress and a model. On top of all that, she is a big fan of custom cars, especially lowriders! It was the perfect marriage, as Joe’s ’62 is as clean as they come, and the city of Riverside provided the perfect old-school backdrops for this amazing shoot. Looking through the lens at Jazmin and the Impala in some classic-looking alleyways, it almost felt like we were time travelling and revisiting the glorious early days of the Lowrider movement. Doing the shoot for this feature proved to be more difficult than we originally thought, as passers-by were breaking their necks and slowing down to try and catch a glimpse of Joe’s ride, and the beautiful-but-deadly Flora Venenosa! Traffic may have become a little congested for a while, but the shoot rolled on, and the crew captured some amazing raw urban images, once everything was all said and done. Joe didn’t mind at all, in fact, he’s used to the attention his pristine Impala receives. With a humble sense of pride, Joe takes it all in, appreciating the many compliments his ’62 constantly receives from all walks of life.

Joe gives big thanks to his fellow club members for their help and support with the buildup of “Mystic.” He says that he would like to add a continental kit to it soon, but he also has his eyes on a new ’62 buildup, this time, a convertible. LRM readers will be looking forward to Joe’s topless ride, but in the meantime, this hardtop will certainly provide enough eye candy.