Newsletter
Sign Up today for our FREE Newsletter and get the latest articles and news delivered right to your inbox.
Home » 1961 Chevy Impala Convertible – Amethyst 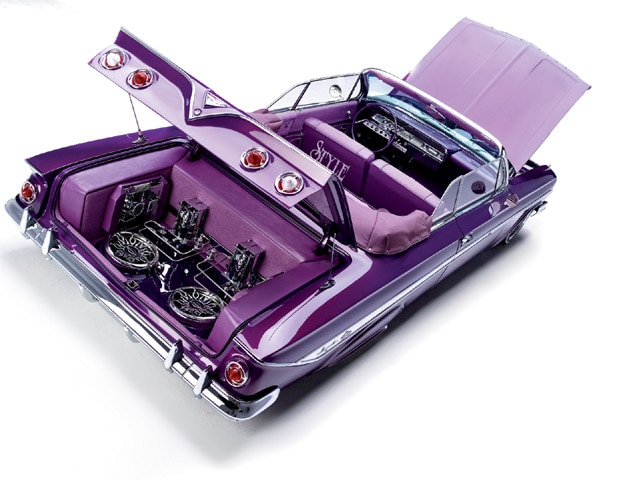 Inspiration can come in many different forms and spark from many different places. For some, it comes from imagination and raw creativity, and for others it can come out of need or comfort. For veteran Lowrider Danny Ayala of Alta Loma, CA, his latest beauty was certainly a product of both. No stranger to the scene, Ayala has had a few cars in his lifetime, including an impeccable T-bird that was featured in LRM several years ago. This time around, Danny wanted to build a convertible cruiser that could soak up the sun while he drove it to picnics, and catch the warm Pacific breeze when he took it to club meetings on hot summer nights.

Danny’s search for the perfect ’61 Impala sent him looking anywhere he could across the country for the better part of a year. His patience paid off as an exhausted Danny found the Impala that we are featuring today just 2 miles from his own home. Ayala inspected the car from grill to bumper and decided it was indeed the perfect Impala for his vision. Once he was sold on the $10k asking price, he purchased the convertible and immediately drove it home.

During the drive home, Danny remembers telling himself that he would just paint and reupholster the car, as it already drove like a dream and looked great. After some time however, the obvious truth set in and Danny knew that his position as president of Style would ultimately lead him into rebuilding the car. Feeling the pressure of his leadership role, he realized that he wanted to build the perfect cruiser in order to set a good example for his club. The quick build up he originally envisioned on his ride home turned into an elaborate 7-year project that produced this clean California cruiser.

The build started like any good restoration should, as Danny got the car home and took a thorough inventory of the car, diligently making notes of what parts actually needed to be replaced or refurbished. The car was stripped down and sent out for paint to Reggie Vargas of H&R Classics so he could give the Chevy an external make-over. The initial paintjob looked amazing, however a little bad luck ruined everything, as Danny had an unfortunate incident with the Impala at home. The results of the incident left Danny scratching his head, and with no other option but to completely repaint the entire body. This was also easier said than done, as the original shop that had painted the car, H&R Classics, had unfortunately gone out of business. Luckily, Danny had a solution, and he took the car over to Mario’s Auto Works of Montclair, CA. The boys over at Mario’s were able to step in to aid him in achieving the perfect exterior for his ’61. The De Alba’s tried every trick in the book to save the original color, but had to start over in order to give Danny the flawless finish that he was looking for.

Once the car was painted, it was dropped off to Mike Lamberson of Riverside so he could accent the bodylines with some expert pinstripping. Mike also added some extra style by lending his signature touch to some perfectly crafted silver leafing on the sides of the car. Upon completion, Danny was relieved to find that the three-stage paint finish was executed with the same plum and gold pearl tone that he was originally looking for. After buffing out the convertible, it was back to Danny’s house so that he could reassemble the project and bolt up the chrome trim that had already been refurbished by Apolonio of AB Polish and Chrome in Montclair.

Since the car was a frame off, Danny took this time to reinforce the stress points and even add shock towers to the front suspension that would help to ensure a smooth ride while driving. To assist with bolstering the under carriage, Danny powder coated it to add some extra longevity to the bottom of the almost 50 year classic. The hydraulics were installed by Hoppo’s out of Ontario, CA, who made sure that the four battery system was wired to give Danny front, back, and side to side action. Going the extra mile, the guys at Hoppo’s gave the hydraulics a clean look with the help of stainless steel tubing that was polished down into a show-ready finish.

The car had a modern day drive train added to it, which consisted of a 2002 Chevrolet small block and transmission combo. This engine was dressed up with chrome accessories and bolted up beautifully by Juan at the Automotive Doctor based out of Rancho Cucamonga. The problem of making sure the engine was breathing correctly was skillfully solved by Bob’s Muffler, as their crew installed a perfect dual exhaust system.

Robert of H&R Classics performed all the interior work in a violet marine vinyl that was designed to match the exterior of the first paint job. Thanks to the fact that Danny had opted to keep the same tones in the new paintjob, this interior work was still a perfect fit. The car was then taken to Mark of Elegance Auto Interiors to install the plum stay fast convertible top.

The ’61 had taken shape, and since Danny was making the convertible a cruiser, he wanted to make sure that the car was able to have a clean and clear sound system. He took the Impala over to Hector of Hector’s Car Audio in Pomona who installed the Pioneer head unit that controlled the Audio Bahn amplifiers. Danny wanted to make sure that no matter where a passenger was sitting in the vehicle, that they could equally take advantage of this premium sound system. To accomplish this, Infinity speakers were strategically placed throughout the vehicle giving the effect of a perfect surround sound concert.

After seven long years of work, the wait was over, and a perfect cruiser convertible was finally born. Danny not only set an example for his club, he set the bar of perfection with this gorgeous ’61 Impala. This “Amethyst” is surely the gem of Style So Cal Car Club thanks to Ayala, who admits that he could not have been able to enjoy his car today without the love and support of his wife Maria, who has been behind him one hundred percent. No doubt she greatly enjoys cruising with him in this classic Chevy now that summer has officially started.