Newsletter
Sign Up today for our FREE Newsletter and get the latest articles and news delivered right to your inbox.
Home » 1962 Chevrolet Impala Convertible – Best Of Both Worlds 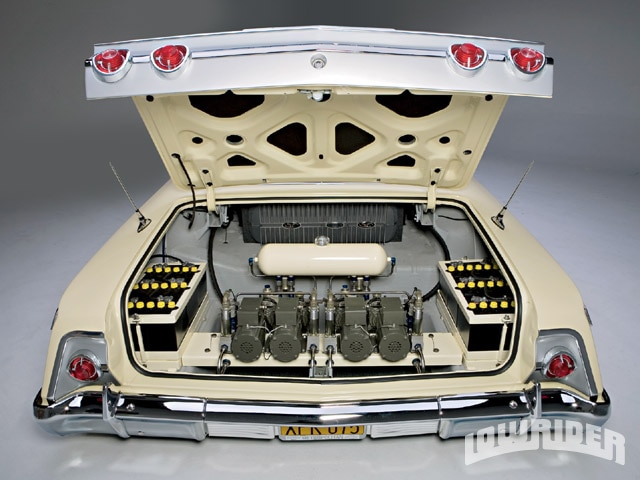 The classic car game has always had its share of conflict between two primary schools of thought. On one hand, you have the purists–the old-schoolers who believe in restoring the classic cars to make them look exactly like they did as they rolled off the assembly line. This involves the painstaking process of researching and then actually finding all the original parts, color schemes and intricacies of the original car before ultimately putting them all together to look brand new. On the other hand, you have the new-schoolers, the modifiers who believe in modernizing, customizing, and tricking out these classic cars to achieve an even further degree of originality and uniqueness. Crazy concepts, wild paint jobs, and outside-the-box thinking dominate this section of the classic car world, which ranges anywhere from muscle cars to lowriders. We’ve always remained dedicated to showcasing the best of both the old school as well as the new school to allow our readers to define their own tastes as well as learn about the customization process that happens on both sides. This dual concept best defines what Brent Reese of Covina, CA has done with his 1962 Impala hardtop, a true California original. Upon first purchasing the car in San Diego for a mere $2,500, Brent couldn’t believe the fantastic shape the car was already in, as the body itself was almost perfect. He instantly knew this one would be best served as a rebuild. But as a man of many cars, often keeping them for only months at a time, Brent still wanted to add his own edge to the classic. Envisioning what this beauty might have looked like if Chevrolet made lowriders straight off the assembly line in 1962. He decided to combine and balance the elements of the old and the new all in one amazing automobile, giving us truly the “Best of Both Worlds.”

The stage was set and his purchase was made, so the next step for Brent was to get the car home, sit down, and make a game plan. Brett knew exactly what he was looking to achieve with the car, but wasn’t yet sure exactly how he could make it all come together. Balancing the old and the new is already a tricky concept. To further complicate his situation, Brett also had a short timeline to put it all together. A dedicated lowrider that he is, Reese needed this baby shined up and ready to roll by New Year’s Day for the Majestics’ annual picnic. That left him with only a few months to make it all happen. Having been in the scene for years, Brent had valuable connections in place to help him achieve his goal in plenty of time. The car itself was already fairly stripped down, so he knew that a full frame-off restoration was possible as long as his build team could stay on track.

The body of the ’62 only needed a few weeks of work, but knowing that time was of the essence, Brent sent out the car for paint as soon as possible. He chose to ship the car to El Monte’s Chevy Shop and let their expert paint team tackle the corona cream colored finish. This two-stage DuPont paint job was shot over the deuce, then the shop sent the car back to Brent just a few short weeks later. The car was now completely buffed out and ready to be assembled. His initial vision of combining originality and lowrider style remained Brent’s top priority, as he made the risky move of dropping the frame to have it reinforced and prepared for his elaborate custom hydraulics set up.

Boasting one of the more elaborate setups to ever grace Lowrider magazine, this hydraulic system features over $12,000 worth of custom work and accessories. The vintage pumps were found in a surplus warehouse in Florida, amazingly still wrapped, untouched and brand new in the original crate boxes from 1954. Mike Ishiki at OG Gate Service completed the whole design and layout, using NOS Eemco motors with NOS Stratopower Pump heads for smooth performance. Tank guru Cesar Martinez was brought in to customize and build the oil tank leaving Onrie Ruiz of Hardtime Hardlines the task of bending all the lines to Mike’s original layout and specifications. Big Frank of Big Franks Customs did the battery racks pump shelf as well as the installation, dressing up the deuce with four custom Adex dumps stamped with 1962 serial numbers, Optima batteries with tar top battery covers, NOS A/N fittings, #8 republic zig zags, oil catch jars, Bendix filters, Republic Check Valves and Cannon Plugs for wiring the dumps, making this a truly amazing setup from start to finish.

The next step in the process for this beautiful machine included a complete engine overhaul. Having already added so much to the vehicle, Brent needed a motor that could match up with the changes he had implemented, and he opted for one with more power. Both the engine and engine compartment were completely renovated as he added a small block 350 engine to replace the stock 283 that originally powered the Chevy in 1962. Still keeping in mind Brent’s need for a classic look, Manuel Rojas took on the responsibility of performing a full engine and transmission transplant that could maintain the look of the original stock engine while adding more horses and modernizing the performance of the vehicle. This was done by redesigning the engine compartment to fit the obviously bigger motor–a tough task, but one that was done perfectly by Rojas. Once he was satisfied with this upgrade, Manuel had refurbished the entire drivetrain, leaving the car looking like a sleeper but ultimately gaining over 80 plus horsepower, a big change from the original 220 provided by the original stock 283 motor. This ’62 was truly beefed up, making for an amazing drive and equally smooth ride, much improved and exactly the feel that Brent was going for.

The engine in place, Brent’s ’62 ran like a pro but it needed to shine like one, he knew it was time to add the all-important chrome. Still looking for more of a classic look, he wanted a nice tasteful job, nothing too flashy but still eye-catching and interesting. He called upon Sergio at Metal Finishing of East Los Angeles to work his magic on the Impala. A man with a deep resume, Sergio knew exactly what type of approach Brent was looking for and added just the right amount of chrome for the perfect look, preserving both the grace of the original vehicle and Brent’s modern style. The chrome instantly set off the cream colored exterior finish with just the right amount of contrast that really captured the believable look that initially became the concept for the vehicle. This finished off the outside of the car nicely leaving only the interior as the final chapter in Brent’s restoration.

He called in Freddy of Bowtie Connection in Artesia, CA to wrap the interior of the Impala, finalizing his vision. Freddy installed a Cars Inc interior kit that complemented the car exquisitely, leaving it plush and tastefully designed, just like an original factory lay out. He installed the carpet kit and headliner and Brent was immediately pleased with the results. This ’62 was finally completed and road-ready!

In 5 month, this classic car was amazingly built from start to finish. Every single piece of the frame is either new or refurbished, achieving a look that is stylish and practical, as well as looking like a lowrider concept car that Chevy might have actually made in 1962. Featuring primarily OG and NOS components, Brent transformed this American beauty into a true original piece. The designers of this clean machine would have been just as proud of this design as they were of their original ’62 concept car, down to every panel, screw, and bolt. Brent’s execution achieves not just a classic look, but also a street ready classic lowrider style all in one foul swoop. To balance the old and the new, the modern and the classic, the flashy and the conservative is not an easy thing, let alone achieving that in one vehicle, but Brent Reese of Covina, CA has done just that. Rolling to the Majestics’ new year’s picnic must have been a breeze in this big body beauty, Brent has truly achieved what he initially set out to do; make a California Classic with a Lowrider edge. We look forward to seeing the results of the next project he decides to tackle as this one is an example of mere perfection.

Body/Paint: Painted by Bert and Mata at the Chevy Shop.

Iinterior: The original Cars Inc interior kit was installed by Freddy of the Bowtie Connection.

Suspension: Vintage Hydraulics, plumbed and hard-lined to look like a modern system.