Newsletter
Sign Up today for our FREE Newsletter and get the latest articles and news delivered right to your inbox.
Home » Hypnotic – 1963 Chevrolet Impala Convertible 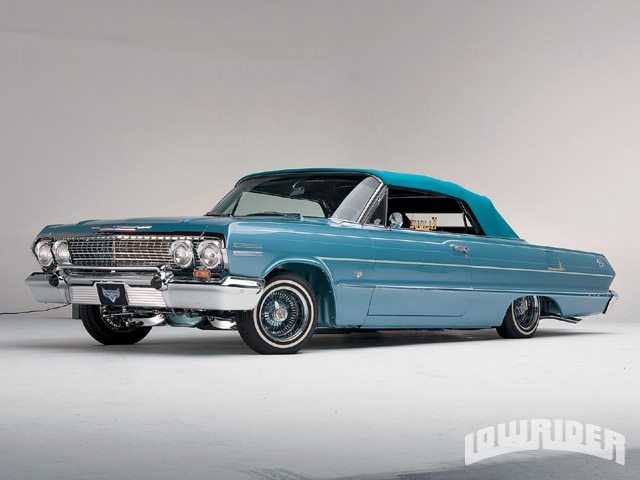 When you hear the word hypnotic, the first thing that pops into your head is probably the pretty blue alcoholic beverage that, when mixed with Hennessy, turns into the mean green Incredible Hulk. But that’s not the case for Kobe Ortiz. He envisioned the color hypnotic to be more than just a drink; it’s his ultimate fantasy ride.

Hypnotic was always, however, one of Kobe’s favorite drinks. “Me and my partner were hanging outside one day and we just kept looking at the color of my car, trying to figure out a name for it,” Kobe says. “I wanted something different and cool. Just when I had given up, I looked over to my second empty bottle of the hypno and I told my boy that the color reminded me of this drink, so I decided to name it `Hypnotic ’63.'” The name, as well as the color of the car, can definitely explain itself. It has the power to hypnotize the ladies with every glance and it makes the fellas go into a complete daze whenever they see him cruising down the neighborhood in his ride.

Kobe has always been a fan of the lowriding scene. He would always watch his brother build cars back in the day and cruise them all around the neighborhood. When his brother retired from the scene, Kobe decided to follow in his footsteps. He always had a passion for building custom rides, but when he had the chance to build his very own ultimate dream car, a ’63 Chevy Impala convertible, his love for lowriding grew into a passion. “I owe a lot of my success with this car to Bert from the Chevy Shop,” Kobe says. “Without him, I don’t think the building process would have gone as smoothly, so I’m truly thankful.”

According to Kobe, the quality and style of his build can be traced back to the Klique Car Club in East L.A., which he has been involved with for over 17 years. These cats helped him set the standards, and the way that they rode together as a team made him cherish the companionship of his car club members. Another good thing about Klique Car Club is that it has over 45 years of experience when it comes to style, longevity, and camaraderie. They are also one of the very few old-school car clubs that still exist since the days when lowriding really took off.

This car has been with Kobe for many years now. Although his wife isn’t quite thrilled about her husband’s hobby, she manages to deal with it and sticks by him all the way. “She has no choice but to like it,” Kobe says jokingly. “I’m known as sort of a bad boy with my car, but she’s been with me for 23 years and now my kids love it too, so I’m sorry to say it, but she will learn to like it one of these days because it’s a part of me.”

Engine: A GM Performance stock 350-cid crate motor was dressed up by Jesse from Custom Lowz Shop. The 300 transmission with a custom stainless exhaust was installed for better highway performace.

Body/Paint: The hypnotic Aqua Blue was painted by Bert and Mata at the Chevy Shop in El Monte, California. Pinstriping was done by Buggs Auto Works in Arizona, and the mural was done by OG Abel.

Interior: The original-stitch design was done by the Chevy Shop in El Monte.