Newsletter
Sign Up today for our FREE Newsletter and get the latest articles and news delivered right to your inbox.
Home » Fame – 1980 Cadillac Convertible 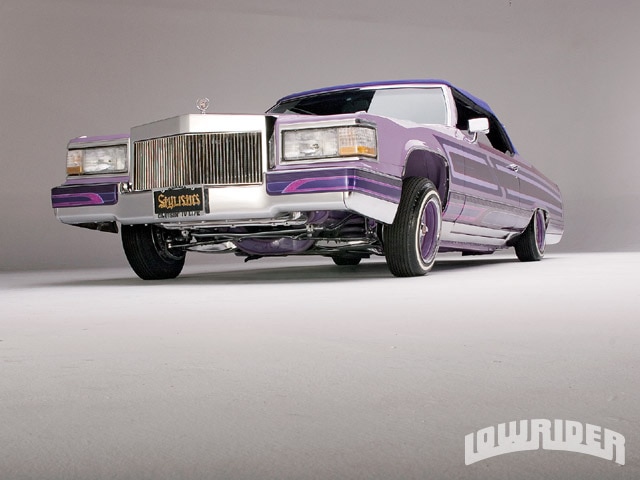 Sometimes it’s funny how things happen. Some of the best finds in life are often in the most unlikely places. Take for instance George Ramirez, the owner of this fine convertible. You probably haven’t seen many of these since they didn’t make very many of them. We’ve been fortunate enough to have a few of them in between the pages of LRM. This one was a lucky find for George. “I was rollin’ with a member of Stylistics on a trip out of state and I told him that I just saw a Caddy convertible in someone’s backyard half covered,” George says. The rarity of these cars had his compadre doubting what he’d seen. “He didn’t believe me and it took me about 10 miles before I finally convinced him to go back. When we got there I was glad I was right, but even more so that it was an OG convertible,” he says. After some Donald Trump-like negotiations, George procured the convertible and towed it to its new home in North Long Beach, California. George had wanted one of these Caddies for quite awhile after seeing another convertible named “Bow Down.”

When he was growing up in Lynwood, California, he would see Stylistics’ cars cruising everywhere, bumpers laying, chrome shining, and hear the boom of subwoofers piercing the night air. George’s desire to be a part of something that was inspiring and larger in life than himself continued to grow. Fourteen years ago George joined their ranks. Four years after joining, George became the president; and now that he’s a member, George is living his childhood dream every day. During his 14 years in the club, George has owned and built many lowriders, including our ’04 feature car “Big G,” an ’83 Brougham. See a trend here?

Keeping in mind that the car was built for making a big scene at the car show circuits, this custom build had to became a family affair. The Ramirez family played a role of execution in the final product, in more ways than one. The name for GM Customs comes from the first letters of both of their names: George and Maria, and if you read through the tech sheet, you’ll see that George did almost all of the work, but his wife conceived the name of the car. They decided to use the same font as the infamous 1980 movie poster.

The build on this car started in April 2007, and was finished in time for the Super Show in October of that same year. The car was outside and featured a single basecoat. The show was good for George, but the drive back, not so much. As luck would have it, the car fell off the transporter and the front end was damaged. But George didn’t let that stop him. It would only take him to the next level.

Sometimes tragedies become blessings in disguise. They can be stepping stones for bigger and better things to come at another time or place. The Stylistics Car Club is a band of brothers just like George who believe (as stated in part of their club mantra): “It’s our goal to ensure that lowriding stays in a positive light, and that we keep the highest standards while participating in our sport and craft. Helping others obtain this goal is paramount, and the creed upon which our organization is based. All who share these ideas and desires are welcomed to join our crusade.”

So when you see George and his family cruising down the streets in this purpled-out convertible Cadillac, recognize that it took a lot of blood, sweat, and tears to build and then rebuild. The word fame is a condition of being known or talked about by many people on the account of notable achievements. A well-suited name for the Ramirez family’s ride.

Engine/Drivetrain: An ’85 Chevy small-block, featuring an Edelbrock carburetor and intake, along with aluminum valve covers, brackets, and a pulley system take “Fame” where it wants to go. An all-chrome exhaust expels the gases. George and Big Sergio at GM Customs, in North Long Beach, California, performed the work.

Body/Paint: A ’90s front end and side moldings where swapped out for the original units, updating the car. A lavender basecoat was put into play and then a pattern of purple and silver was used around the entire car. Wiro, of Long Beach, sprayed a series of Aztec-based images into the pattern, and Curly of Curly’s Striping, in Long Beach, did the pinstriping. GM Customs, in Long Beach, did the body and paintwork.

Interior: The custom interior was stitched in custom lavender-colored leather. The late model dash and door panels received a similar treatment. Unfortunately Sergio, of Sergio’s Upholstery, who performed the stitchwork, passed away shortly after the ’07 Super Show.

Sound System: An Alpine flip-out head unit sent the ones and zeros to an Alpine crossover to shape the sound for a pair of Alpine amps. A Nesa DVD video player resides under the dash, providing the visual stimuli. The Alpine amps juice up a set of Pioneer mids and highs, and on the bass end two Rockford Fosgate subs make things rattle. The sound system, along with much of the rest of the car, was installed by George at GM Customs in North Long Beach.

Setup: The frame, along with the upper and lower A-arms, received the full wrap-and-mold treatment. Eight-inch cylinders in the front and rear and 3 -ton springs front and rear make up the suspension. Four mini pumps, four Adel dumps, eight solenoids, and two switches control the fluid flow, and four batteries provide the power. GM Customs and Lowlife Hydraulics put it all together.