Newsletter
Sign Up today for our FREE Newsletter and get the latest articles and news delivered right to your inbox.
Home » California Classic – 1965 Chevrolet Impala 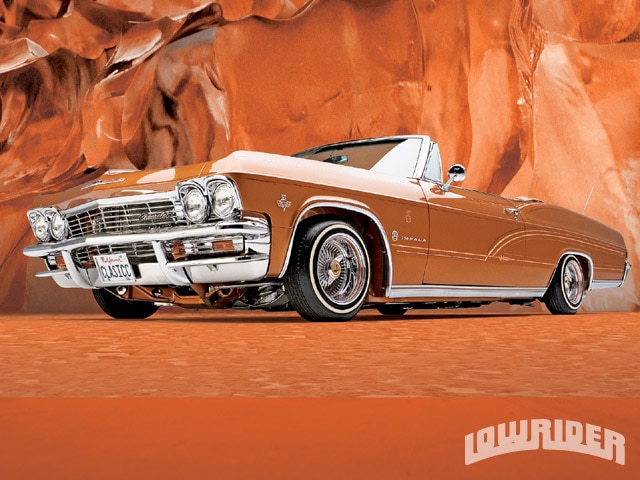 Jose Barba is known for building cover cars like “El Amo,” the ’63 Impala that put him on the map as one of the most remembered and favored Lowrider cover cars. He was born in Santa Monica, California, in a mostly Latino neighborhood. On the weekends he would see his neighbors getting their rides ready to hit the boulevard while he played with his Hot Wheels on the front porch of his house.

Jose’s family later moved to the Valley, and when he turned 16 he started building his own lowriders. Jose’s love for cars grew as he got older. He joined his first car club, Mini Dukes, during the mini-truck era. Mini Dukes Car Club was a chapter created by the Ruelas brothers because the car club they were a part of, the original Dukes, didn’t accept anything that wasn’t considered a bomb.

Soon, Jose started to build a name for himself with his ’87 Toyota extra cab longbed mini-truck, which he called “2IcedforU.” His mini-truck has been on pages of Lowrider magazine a few times. During that time Jose opened up a Dukes Car Club chapter in the Valley, which he was part of for 10 years. A few years later he joined Premier Car Club, and hit the lowrider show circuit with his new creation-El Amo. El Amo went head-to-head with some of the top lowriders of its time, like “Thug Passion,” “Life After Death,” and “Guns ‘n’ Roses.” After winning numerous awards, including the Lowrider Excellence Award, the car was set aside and he began to work on a new project.

Jose wanted to purchase a California classic so he set his eyes on a ’65 Impala ragtop that his friend owned. After a few days of negotiation, Jose purchased the Impala for $8,500. The car started as a cruiser-he enjoyed taking wife and kids out on Pacific Coast Highway and cruise during the warm summer days and nights. Soon his Premier Car Club members hit him up to do minor work to it and then the “bug” hit him hard and he started to take the car a part to go all out on it. The ’65 was taken to Low Lows and More, in Rialto, California, where they worked on the body of the ’65. The guys molded the firewall and belly, the car was prepared, and then Jose Garcia painted it with a mixture of Secret Orange paint and pearl. The paintjob covers the entire car, including the belly and the custom fiberglass trunk. The interior of the car was taken to Henry at Henry’s Customs, in Monrovia, California, where it was given a facelift back to its original upholstery. Henry also hooked up the trunk with lots of custom fiberglass enclosures from the Rockford Fosgate-sponsored sound system. The staff of Low Lows and More then dressed up the engine with all Billet Specialties components.

After the car was put back together, he began the finishing touches. Some of the engine parts, like the custom water hose and the lower and upper A-arms, were given to Herman for engraving. The trunk was hooked up by Abel Rocha, from the San Fernando Valley, where he laid down airbrush murals of beautiful female angels and Los Angeles landmarks, including the Santa Monica Pier and Dodger’s Stadium. Last but not least the car was taken to world-renown Walt Prey from Simi Valley, California, where he gold-leafed and pinstriped the car and gave it the finishing touches to pop out the body lines. After the car was done, it jumped into the San Bernardino Car Show where it made a splash in the lowrider circuit. Now another car of Jose Barba’s is being featured on the pages of Lowrider magazine, the “California Classic.” We had a chance to sit down with Jose and ask him some more personal questions.

LRM: Tell us a little bit about yourself.Jose: My family is from Zapopan, Jalisco [Mexico], but I was born in Santa Monica, California. I have been building cars since I was 16 years old. Because I lived in a neighborhood where lowriding was the lifestyle, I was influenced by a lot of the OG riders.

LRM: What do you do for a living to keep up your beautiful cars?Jose: I’m a landscape contractor.

LRM: How were you influenced as a young child to get into the lowrider lifestyle?Jose: It goes way back to when I was a kid playing with Hot Wheels and the orange racetracks. I also lived in a neighborhood where lowriding was a lifestyle, so it became second nature to me. Basically, the Hot Wheels just got bigger.

LRM: In your opinion, who do you think helped the lowrider movement become mainstream? Jose: In my opinion my good friend Alberto Lopez is the one who helped lowridering go mainstream when he would be hustling all day putting out the magazine. Also, clubs like Premier, Imperials, and Lifestyle all had their part in the culture that we have today.

LRM: You were lowridering in the ’80s, do you care to share any personal experiences?Jose: I remember parking in front of Florentine Gardens on Hollywood Boulevard. I remember Whittier Boulevard, but there was nothing like turning on the tunes and cruising down by Santa Monica Pier and Pacific Coast Highway on a warm summer night.

LRM: Tell us about your previous cars that were featured in Lowrider magazine.Jose: I’ve been very blessed being able to have all my cars grace the pages of Lowrider, like back in the mini-truck era my ’87 Toyota extra cab longbed “2IcedForU,” my ’85 Candy Brandywine Chevy Silverado “La Prieta,” my Candy Blue El Camino “Hozerz Back,” and my ’63 Impala SS rag “El Amo.”

LRM: What other states do you think are holding it down for the lowrider culture?Jose: I believe there are quite a few states holding it down, but, in my opinion, no one holds it down like the mecca of lowriding. There is no other place where you can see quality like the City of Angels.

LRM: Who would you like to thank for helping you build your new project?Jose: I would like to thank my wife, Rocio, and my kids, Ricky and Julie. But keeping it real, this car would not be California Classic if it weren’t for Joe “Red” Garcia and Low Lows. Special thanks also goes out to my car club, Premier, out of Los Angeles and to Sal and Mikey Holduin. And Julie, remember I built it just for you!

Body/Paint: Low Lows and More, in Rialto, California, painted the car with a custom mixture of Secret Orange with pearl. Abel Rocha laid down California-themed murals of girls and Los Angeles landmarks. Walt Prey put on the finishing touches by adding gold leaf and pinstripes.

Interior: Henry’s Customs, in Monrovia, California, reupholstered the interior with custom-stitched impala logos. Custom fiberglass panels were made for the sound system.

Suspension: Jesse Marquez from Custom Lows, in Riverside, California, took on the job of juicing up the car. The setup includes a mini whammy pump with Marzochi pump heads, 8-inch cylinders in the front and 12-inch in the rear with 2-ton coils all around, four batteries, and Delta dumps with custom-bent hard lines. The lower and upper A-arms are molded, engraved, and chromed out.