Newsletter
Sign Up today for our FREE Newsletter and get the latest articles and news delivered right to your inbox.
Home » Dee American Dream – 1958 Chevrolet Impala Convertible 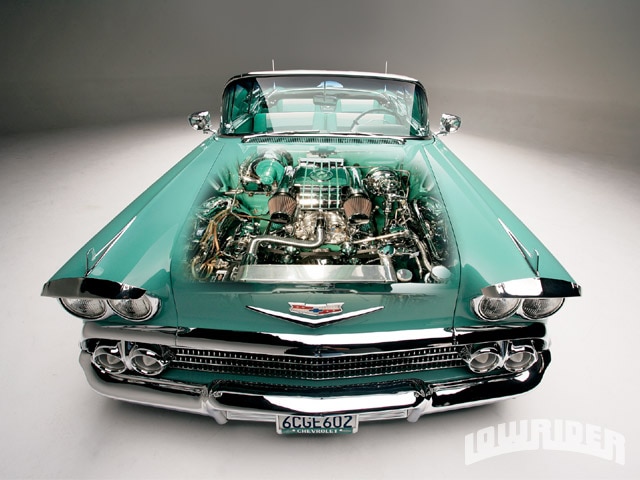 Dee, of Compton, California, is like most of us-he has his eyes set on the American Dream. Growing up in the heart of Compton, Dee has always had lowriders. The ultimate car that he was looking for was a ’58 Impala convertible, so when he got the chance to get one, he jumped at the opportunity.

After acquiring the convertible from John Kennedy of Bowtie Connection, in Artesia, California, Dee hired John to oversee the project because it needed minor TLC. After talking to Dee, John started on the project, having his crew disassemble the vehicle and prep it for the paint shop. Since Dee wanted the car to look fresh, it received a new paintjob, which was done by Mike Lopez, Fuzzy, and Toro, who also made sure that the car was a bare shell. Since the car was stripped down, Bowtie took advantage of the situation and sent out all of the trim to get plated by Sergio of Metal Finishes in Los Angeles.

Once the car was ready to be worked on, John sent the car to Holix Auto Body in Harbor City, California. Kasa and Nino took on the task of preparing the classic Impala. The paint crew started off by spraying the Chevy with a two-stage PPG factory pastel green. The car was then buffed and shipped back to the Bowtie Connection where the first-generation Impala was reassembled.

Before John’s crew started bolting on the trim, including spotlight mirrors, a factory Continental kit, and cruising skirts, the trunk was removed and sent out to Fonzy who painted the trunk lid with murals of three girls, including Lowrider model Pam Rodriguez. They also put factory power windows and vent windows back on the car. The frame received a chrome and molded undercarriage and features a 605 gearbox, CPP disc brake kit, and a Ford 9-inch rear end.

Since this car was going to be a daily driver, they made sure it was ready for the boulevard. A new crate engine was used and was dressed up with a few bolt-on billet goodies, including a polished intake and Edelbrock carburetor. Bowtie Connection also dressed up the engine with a Street and Performance serpentine kit and a Walter Prosper air cleaner. Once the engine was tuned it was ready to roll.

Dee’s hydraulic setup was built by Big Frank of Big Franks Custom Hydraulics, in Cypress, California. The setup consists of a chrome whammy pump, three square dumps, and four 31-series Trojan batteries. The batteries were painted to match and the setup was chrome-plated in a show finish. Once it was complete, Miguel Martinez plumbed the setup in a stainless steel finish. Other tricks added to the trunk compartment were metal panels that cover the Trojan batteries.

The convertible was now ready for the interior, which was done by Freddy at John’s Exports. Freddy wrapped the power bench seat and rear convertible seat in a CARS Inc. interior kit, which complements the exterior of the car. The interior was dressed up with Dakota digital gauges and a set of NOS floor mats that he purchased on eBay. The ’58 sound system was hooked up by Gordo at 562 Kustoms, in Paramount, California, which installed an Alpine head unit with iPod compatibility that’s powered by Rockford Fosgate amplifiers and wired up to the Fosgate woofers and midrange speakers that play Dee’s favorite old-school jams.

The car was ready to roll, but not without a set of custom wheels. Dee bought a set of 13×7 custom Zenith wire wheels and mounted them on Champion P155/80R13s. With this done, Dee’s now ready to roll on the boulevard, and the Los Angeles freeways.