Newsletter
Sign Up today for our FREE Newsletter and get the latest articles and news delivered right to your inbox.
Home » El Cien Porciento – 1962 Chevrolet Impala Convertible 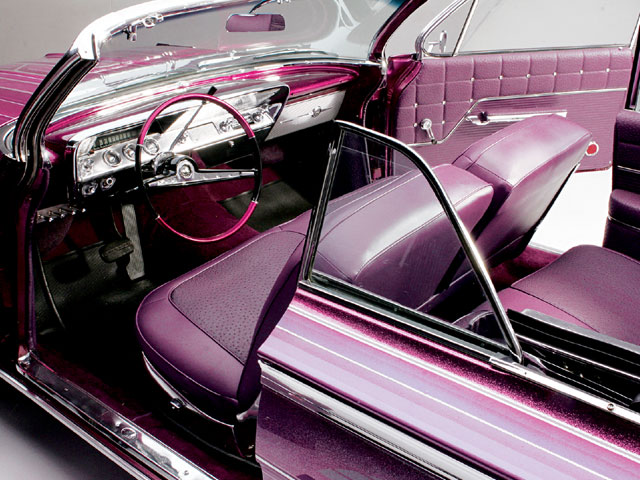 With the help of the Internet and lowrider video guys like Truucha, you might have heard of a local Los Angeles, California, car club called Maniacos. This club has been around for a few years, but has never been featured in Lowrider Magazine. This wasn’t due to any lack of quality in the Maniacos’ rides, as it’s always been the club to beat with street riders. “Rooster,” as he’s known to the people, is a Maniacos member whose had several cars that have been worthy of being featured in Lowrider, including some hoppers with fully gold-plated undercarriages, but now he’s breaking through big-time with this month’s cover car.

The Maniacos methods were no different with Rooster’s ’62 Chevy Impala convertible. Rooster made sure not to cut any corners, creating a street ride that usually has people giving him thumbs up when cruising with his wife and kids. When Rooster acquired the Impala from his buddy William, it was already started on and he knew that it would be a solid foundation for a car that would be the “King of the Street.”

The only thing different on this build was that Rooster wanted an intricate paint job, so the car was taken to Levi’s Customs in Lynwood, California. Levi and his brother Jesse took on the two-year paint job. Levi used several rolls of tape and countless hours of masking to accomplish the intricate patterns that were shot in House of Kolor bases and candies. The long process was followed up with several coats of clear that were allowed to cure for weeks before being cut and buffed out to allow the flake to dance under the sun. The flaked-out doorjambs received some custom murals by Edgar Rodriguez at Maxima Imagen in La Puente, California.

To speed up the build, Rooster had pulled off the X-frame and started on the rolling chassis. The frame build started off like any other, but this frame was going to be different. Rooster called on his close friends “Junior” and Johnny to help out on this top secret part of the project. The completed frame was ground smooth and then dipped into tanks that were able to magnetize it and add chrome plating. Tricks done to the frame include an engraved Maniacos logo and pinstriping by Edgar Rodriguez.

The entire frame and undercarriage on Rooster’s “deuce” can be seen with the help of 16-inch rear hydraulic cylinders and 8-inch cylinders to the front. The Red’s Hydraulics setup allows this car to hit back bumper. If you think that we’re joking, you’ll be able to see for yourself in an upcoming Back Bumper spread.

Once the rolling chassis was all put together, Rooster and his crew added a stock 350 crate motor and transmission combo. The engine compartment was then dressed up or, to quote Rooster, “blinged out,” with everything either chrome plated or polished. This engine/tranny combo makes a reliable power source for this droptop deuce, which is what Rooster really wanted. Rooster slapped on a set of OG Dayton wire wheels that get attention when people hear him bumping his favorite jams. These songs are heard through a complete Rockford Fosgate sound system that’s controlled by a Kenwood head unit.

The last thing that was done to the ragtop was the interior. Rooster wanted to give the car his particular flavor so he went to Felipe’s Upholstery in Phoenix, Arizona, where they were able to create an interior that combines that classic look with a modern twist. The result is a purple interior with ostrich inserts, highlighted by the factory trim on the panels that serves as a third color and texture. Felipe also wrapped the chrome convertible rack with a purple Stayfast top.

Coincidently, this ragtop was built at the same time as other Maniacos rides and the club’s been hitting the shows with several cars that were completed simultaneously. So, if you live in the L.A. area, you might catch them cruising, but never slipping, as they will pull up and hop their rides like real street riders, letting the people know why they’re the Los Angeles Maniacos.

Rooster would like to thank everyone who helped create “El Cien Porciento.” Without the “100-percent” support of his family, he would not be able to do what he does. Keep on cruising, Rooster, and we hope to see more clean Maniacos machines in upcoming issues of Lowrider.