Newsletter
Sign Up today for our FREE Newsletter and get the latest articles and news delivered right to your inbox.
Home » Jonathan Rodriguez – Tequila Sunrise 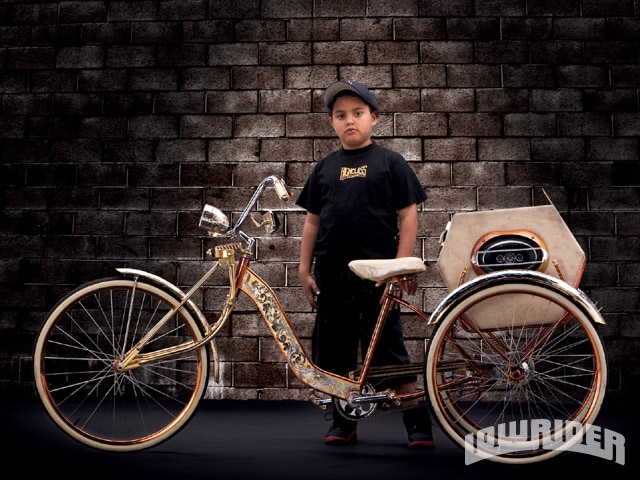 At only 7 years old, Jonathan Rodriguez has been “under the influence” and on the right track thanks to his dad, Luis “Speedy” Rodriguez. Jonathan has been around custom cars most of his life since his dad is an active member of High Class Car Club of Los Angeles, California. His dad is also the owner of Speedy’s Metal Finishing and has worked on several champion lowriders. With Jonathan’s dad owning his own polishing and plating company, it was a little easier to put together this project. Speedy has made several connections over the years and he had no problem cashing in a few favors when it was time to help his son.

Speedy started by finding a complete three-wheel frame and axle at a yard sale in Long Beach, California. After he asked how much it was and was told $50, Speedy knew that he had to pick it up for his son. Once he got the classic Schwinn home, he took it apart and began working on it. He wanted to build his son something different, and after doing so much work on several bikes for other kids, he had an idea of what he wanted.

Next, Speedy had the frame polished and ready for more than a touch of chrome. The frame received the same “love” that’s been seen on cars that have hit the main show floor. With a copper foundation, the chrome finish has a deep look, but it was taken a step further because Speedy had the frame painted in Candy Tangerine with exposed chrome panels. The rest of the trike was also polished and chrome plated with the same care as the frame.

Once the trike was put back together, Speedy and Jonathan visited Joe at Sound Crazy in South Gate, California, who was left in charge of installing a crazy sound system. The result is a custom box that fits between the two rear wheels, and includes a pair of 6×9 speakers and one 10-inch subwoofer used for fill. The seat and custom speaker box were then taken down the street to Joe’s Upholstery in Bell, California, where they were wrapped in patterned Gucci material.

With the speaker box being a central point of the trike, Speedy looked at what more could be done to it and decided to add some mural work. The subwoofer speaker box was taken to airbrushing legend Wiro at Wiro’s Airbrushing in Compton, California, who slammed out a mural on the painted speaker.

Since its completion, Jonathan and his dad have been showing their “Tequila Sunrise” trike at local shows and have repeatedly taken top honors, including Best Trike, Best Engraving, and Best Chrome Finish. Speedy told us how he wanted to keep Jonathan on the right track and how he also found this project to be a good avenue for them to bond. The plan for the future is for Jonathan to keep getting good grades in school and maybe a four-wheel project will be started. Good luck to both father and son, and please, Speedy, keep the young man under the proper influence. These kids are the future of lowriding.