Newsletter
Sign Up today for our FREE Newsletter and get the latest articles and news delivered right to your inbox.
Home » Isaiah Hopper of UCE Car Club – Lil’ Sweet ‘N’ Sour 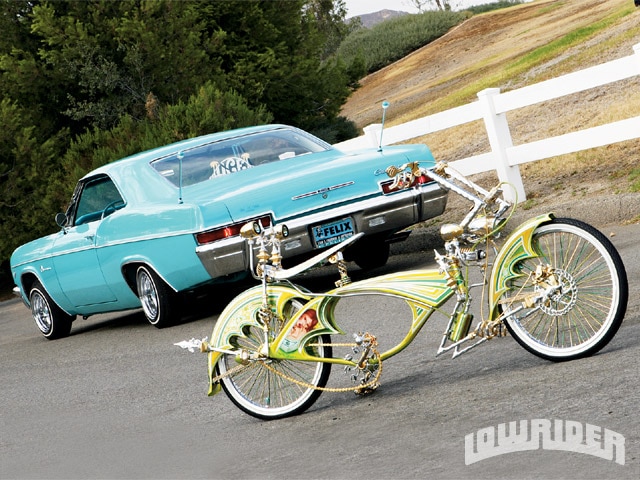 Isaiah Hopper, of UCE Car Club, got into lowriding because of his dad, Allen. At 12 years old he has already set some goals for his lowriding lifestyle. His first goal was to build a bike that would get him on the map and, with the help of his parents, he is on the right track.

When they started they had a vision. Allen decided to buy a reproduction frame because he didn’t want to damage an original Schwinn. The reproduction was then given to Thomas Draus who went crazy modifying the cantilever frame. Draus started off by cutting the seat post to make the bike look longer than it was. Then it received some metal templates to accomplish a molded tank for the front, while a set of custom skirts was incorporated to accent the rear of the frame. Draus took it a step further by making a set of custom fenders to match the bodywork that he had already done.

Once the frame was ready for paint, Draus handed it back to Allen who mixed some colors and came out with a Jolly Rancher Green color, which he applied over a silver flake base using other tones of greens. Jeff Roberts, of La Verne, California, pinstriped around the murals that Alberto Herrera, of Visalia, California, did on the 20-inch frame.

Since Allen had entrusted the project to Draus, he handed him back the painted frame and parts for assembly. Some of the parts came from Mike Linville, of the Toyshop in Florida, other parts were sent out to La Habra Plating, and the final touch was added by Hernan’s Custom Engraving. Once the bike was complete it received a custom biscuit tuck seat that was upholstered by Robert Rios, of R&R Customs in El Paso, Texas.

Isaiah’s second goal is to be featured as lowrider of the month at the age of 16, just like Albert De Alba Jr. Only time will tell, since the Hopper family still has four years to put together their next project.

Stream and Binge the Full Season of ‘NASCAR ALL IN: Battle for Daytona’ now on the MotorTrend App!

City Wide’s first show may have only brought out a few cars but over the years their event has grown to be one of the largest lowrider events in the Colorado Springs area.