Newsletter
Sign Up today for our FREE Newsletter and get the latest articles and news delivered right to your inbox.
Home » Majestic ’63 – 1963 Chevrolet Impala 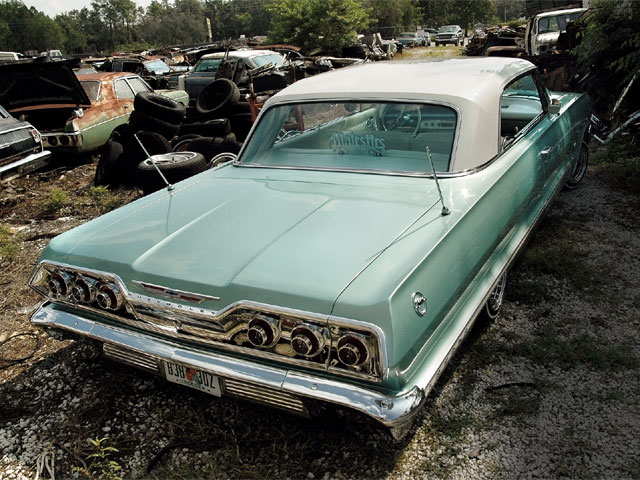 Anyone who lives in Central Florida knows this clean sea green ’63 Chevy Impala with the white top. It’s hard to miss, not only because it’s so smooth and well built, but also because it keeps coming out to shows year after year… and winning. In fact, the car has taken First Place in its class, and came in Second in Sweepstakes, at Lowrider Tour events in the Sunshine State.

However, when Edwin Rosado bought this ’63 seven years ago, it wasn’t to car show glory that he aspired, but cruising the streets on a warm Florida night. With that in mind, making sure that the car looked tight, and ran right, was a big part of Edwin’s plan. Getting his own hands dirty, he fixed up the Chevy 327 engine and 350 Turbo transmission, making sure that he wouldn’t get stranded on cruise night. He also dropped in a lot of chrome, and painted the firewall and engine block. Then some body work, a new paint job, and an OG interior had all of the aesthetics in check.

With almost two decades in the lowrider game, Edwin knew what was left to add… hydraulics. Since he installs hydraulics on a regular basis at his business, Ed’s Hydraulics, Edwin took care of the switches himself. Although he did a good majority of the work himself, he had lots of helping hands throughout the project. He gives thanks to his wife, Jennifer, for supporting his hobby, along with the Majestics C.C. members who helped him, Louie, Jeremy, Joey, his brother Izzy, and Nestor. With their help, it wasn’t long before Edwin had the rolling, majestic beauty that you see today.

Engine/Drivetrain: Edwin added lots of chrome to the 327-c.i.d. engine and cleaned up the firewall.

Body/Paint: Ed Nestor in Orlando, Florida, did all of the paint and body work, smoothing out all of the dings, and spraying the clean finish.

Setup: Edwin dropped in a fine-looking and smooth-working two-pump CCE setup with 8-inch cylinders up front, 10-inch cylinders in the rear, six switches and eight Optima batteries for power. Four-ton springs up front give him the bounce, while 2-tons in the rear balance out the bumps.