Newsletter
Sign Up today for our FREE Newsletter and get the latest articles and news delivered right to your inbox.
Home » Tangerine Dream – 1982 Chevrolet Monte Carlo 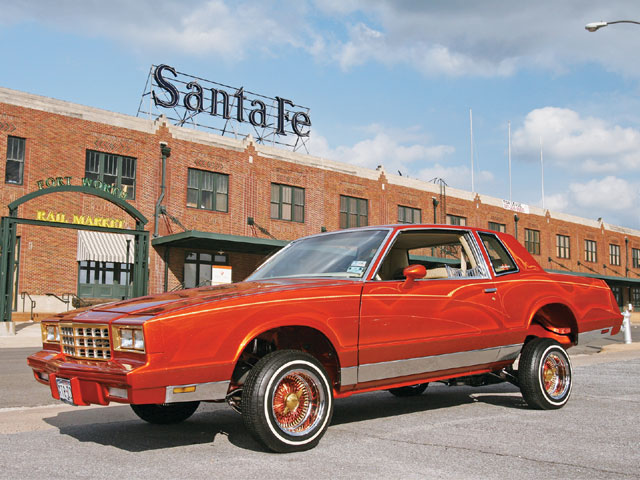 Aurelio Garcia of Fort Worth, Texas, is a shining example of making a living, and a life, out of lowriding. “I’ve been lowriding my whole life,” he says. “It’s my passion. It’s what I love to do.” Aurelio’s a guiding force at A&M Customs in Fort Worth, a leading customizing shop in the Lone Star State, and a big wheel with Mystic Styles Car Club, so he’s living the lowrider lifestyle 24 hours a day.

This particular vehicle, an ’82 Chevy Monte Carlo called “Tangerine Dream,” has consumed much of Aurelio’s waking hours over the past three-plus years. Although acquired through his brother for just $500, the Monte has sucked up many times that amount in customizing fees, even though a lion’s share of the work was done by Aurelio and the crew at A&M Customs.

Aurelio has no regrets, however. “When my brother brought the car home and I saw it, I had a vision,” he tells us. “And that was to make it not only a street hopper, but also a show stopper.” It’s obvious that Aurelio’s succeeded in making that vision a tangible reality, and he gives thanks to the crew at A&M Customs, including Marco, Lil’ Marcos, Lil’ Chris and Lupe, plus his “teacher,” Roger Alfaro at Trimble Tech, Juan, his mom and dad, and his wife, Sandra.

Do you think that Aurelio’s going to leave well enough alone, especially now that the tangy Monte has its own feature to go with its appearance in the November ’04 issue of LRM as the Hydraulics Hotline “Setup of the Month” and its collection of trophies won at big-time car shows? Not a chance. Future plans are already in the works, ones that sound like they will steer the ride in more of a show car direction.

“I have many projects lined up,” Aurelio admits, “but this is the main one. I have plans to redo Tangerine Dream, this time only `show.’ No more hopping for this car. It gets too expensive for a full-show car; breaking something, having to buy a new part and then getting it rechromed. I learned that the hard way. I just got another car that I’m going to build as a street hopper, so look out for that and look out for other rides coming out pretty soon built by A&M Customs.”

Engine/Drivetrain: The stock Chevy 305-c.i.d. block was candy covered to match the car’s exterior and loaded up with chrome-plated and engraved parts by Aurelio at A&M Customs in Fort Worth with help from Lil’ Chris. Al’s Chrome and Advance Chrome & Gold Plating, both conveniently located in Fort Worth, handled the chrome and gold plating, respectively.

Body/Paint: Wanting only the best, professional painter Aurelio applied his own House of Kolor candy tangerine finish with ghost patterns and pinstriping by “Curly” Martinez.

Interior: Aurelio describes the interior done at A&M Customs as “Alonte Cream” with seats provided by L&M Customs, plus embroidery on the door panels and headrests.

Sound System: Marco Garcia at A&M Customs made sure that Tangerine Dream would be sonically superior with the installation of an Alpine head unit, three Autotek amplifiers, crossover, and Kicker speakers, including four 12-inch L5 subwoofers.

Setup: Aurelio had to have hydraulics and went with a four-pump Showtime setup featuring one Adex dump, two “oil system” dumps, 8-inch (front) and 12-inch (rear) cylinders, four switches, 12 solenoids and 12 Trojan batteries with aluminum blocks and 0.5-inch hard-line tubing. As for the suspension, Aurelio also molded the frame, extended the A-arms and reinforced the rearend.