Newsletter
Sign Up today for our FREE Newsletter and get the latest articles and news delivered right to your inbox.
Home » Certified Gangster 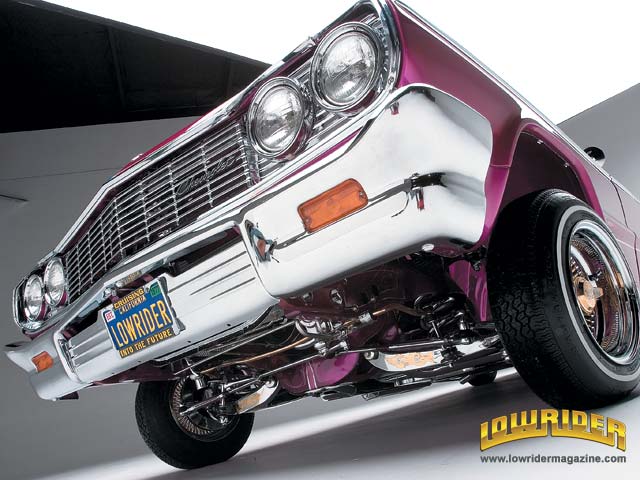 It was three years ago when 30-year-old “Large” of Low Lyfe Car Club in Leisure City, Florida, found this ’64 Chevy Impala SS Hardtop. “I came across the vehicle through a friend of a friend who was selling it because the motor was about to blow,” recalls Large. “I paid him $5,500 [which the seller took as a joke] and it blew on my way home!”

Large, an employee of Bowtie Connection South in Miami, Florida, has been lowriding for 13 years, so he was undaunted by the engine failure and decided to keep the car. “In Miami, a lot of people start projects and claim to be bringing something out for everybody, but they never do,” said Large. “People doubted that my car would ever see the streets again, but I was out to prove them wrong.”However, it wasn’t easy. The makeover took $155,000 and the talents of the team at Bowtie Connection South, Bowtie Connection West, Homies Hydraulics and other artisans to bring the now immaculate Impala to its present level. “I also owe a special thanks to everyone at Bowtie, Homies, Red’s, MA Audio, ABS Brakes, Low Lyfe Car Club, South Side Car Club and the Jones family,” adds Large.

So what does Large plan to do with his hardtop now that it’s finished? Cruise the streets of Miami, of course. He adds, “Dade County, 305… this one’s for you!”