Newsletter
Sign Up today for our FREE Newsletter and get the latest articles and news delivered right to your inbox.
Home » Pimp Juice 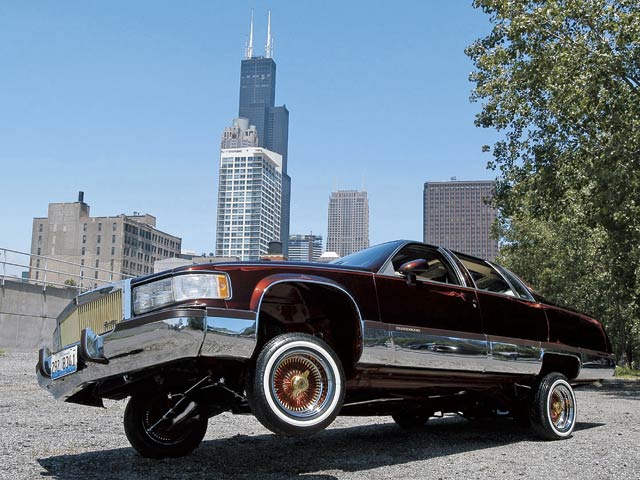 Rene and David Espinoza of Chicago, Illinois, are a good example of how strong family bonds and especially brotherhood are in the lowriding game. Rene and David own a couple of restaurants in Chi-town and rely on the love of their parents and loved ones to support the family business as well as their addiction to customizing luxury low-lows.

The story of the “Pimp Juice” ’93 Cadillac Fleetwood starts with David purchasing the car from a friend. Once Rene got involved in adding wire rims to the Caddy, the customizing bug pumped its venom into Rene’s bloodstream. David asked his brother if he could take care of the project while he was on vacation for two weeks. Rene started by getting the car painted candy brandywine. “I told David that I wanted to put a mural on the car and he said fine,” reports Rene, “so I put my face on the hood (ha-ha).”

After Rene had muralist Martin Pozo airbrush his face on the hood surrounded by some fine ladies, David decided that his former daily driver should belong to his brother so he handed over the keys and pink slip to the car. The vehicle was then transformed from an ordinary street ride into a masterpiece that cost more than $30,000 to build. Big things began happening to the “big body.” The interior is sure the center of attention with a custom fiberglass center console that’s connected to a custom rear deck fiberglass speaker box that covers the entire rear window.

Once the car was on the verge of being finished it needed to get juiced so the frame was reinforced to give it extra support. The frame was smoothed out and candied over to match the body. The trunk is like a jewel box with one of the best hydraulic setups ever seen in Chicago. Gold, chrome and candy paint make the trunk’s contents really stand out.

Rene would like to give special thanks to his brother David for not tripping when the car was taken from him. Rene would also like to extend his thanks to his wife for putting up with his addiction to lowriding, as well as his parents and all of the members of Pura Familia Car Club for standing strong. So if you’re a Chicago resident and you see Rene cruising the streets of the Windy City or if you’re in Rene and David’s restaurant, La Pasadita, make sure that you give Pimp Juice the props that it deserves.

Lowrider Magazine celebrates the lowriding lifestyle. Take part in our Lowrider Tour show and catch the sights and action.

A summary of Chevy’s LT1 series of engines

For decades Jevries has been making his model lowriders and sharing them with people all over the world.