Newsletter
Sign Up today for our FREE Newsletter and get the latest articles and news delivered right to your inbox.
Home » A visit with the Hot Wheels Design Team 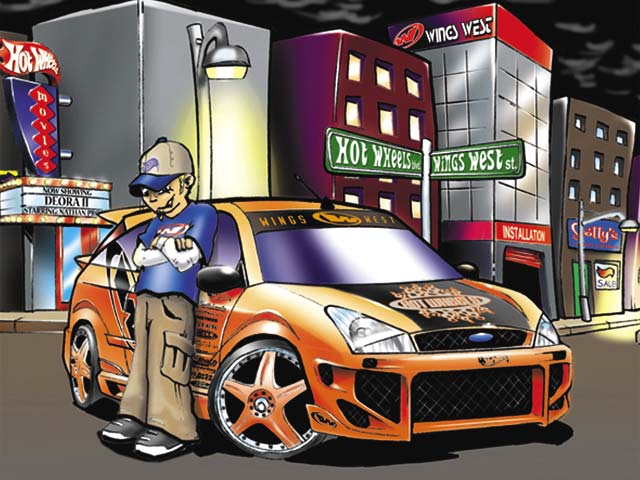 We recently had the opportunity to visit with some of the creative forces over at Mattel, specifically the dudes in the Hot Wheels division. We achieved this by contacting PR guru Dan Salazar, who set up the visit this past September. Dan was a great help in coordinating between Euro Magazine and the guys at Hot Wheels Design. As part of our dare to dream theme for this issue, we thought that it’d be cool to hook up with guys like Eric Tscherne and Michael Heralda of the Design team to see what the process is like when developing the various car lines in the Hot Wheels world.

Eric has been with the Design team since July ’99 and interned for Mattel in late ’98 and early ’99. He graduated from the University of Cincinnati in the summer of ’99 with a Bachelors of Science degree in Industrial Design and Transportation Design. Michael started working for Mattel’s Hot Wheels design team in ’97 designing graphics for the various lines in the Hot Wheels niche. Michael has had a heavy hand in the basic car line and series cars for the past three years, including the five-packs. He’s also been involved with the Cop Rods, Final Run, Treasure Hunt and Holiday cars. The cars that come with the CD-Rom games are also his work, as are the recent Toy Fair cars.

Michael has also been busy with special cars including the Hot Wheels Convention Cars, the Ronald McDonald House Charity car, the Dream Halloween car and the very rare and exclusive employee-only holiday trucks. Michael estimates that he’s done more than 1,000 Hot Wheels designs for Mattel. His influences can be found through the indigenous cultures found in both North and South America, as well as pop artists from the ’60s such as Andy Warhol, as well as Maxfield Parrish and classical masters like Leonardo DaVinci. “Mattel has an extensive archive of books and related art materials and we also do a lot of research on the Internet.” Michael has definitely had an impact on the “look” of today’s Hot Wheels.

Since our main focus in this book is on contemporary custom compact cars we gravitated towards the “tuner-type” cars like the Wings West Honda Civic, the Meguiar’s Ford Focus and the Modern Image Toyota Celica. Several designers have pushed for the current trend of tuner-type models that have been flying off of the shelves at local retail stores and with good reason. With stylish lines, tremendous graphic (or “tampos” as they are known to collectors), detailed wheels, accessories and A-plus packaging, even the more “mature” dude will turn into the oldest “kid” on the block.

Why? Maybe because he remembers getting that first car at Christmas or getting to pick one out from a scary visit to the dentist or doctor because mom promised that he could have a toy when they left the office. Collecting is a big deal as well, with clubs across the country meeting weekly to discuss the latest finds and sharing knowledge of where they can find those elusive rolling pieces of art.

Some people would be surprised by just how much goes into developing each car, which is usually broken down in a series. “We usually meet on Mondays in team meetings to pick cars and bounce stuff off each other as to what we’re working on,” mentions Eric who works on the “Tween Team.” They work on two big planning cycles during the year and it can get hectic at times. But it’s a lot of fun for the guys. “Like for the new Car Tunerz line,” Eric elaborates. “It’s my brain child and I’ve been fighting for this one for the last two years.”

The goal is something that is totally cool and that people will be drawn to; a car that says it’s fast even when it’s parked. Eric refers to the dreams that kids have and the way that they “see” things bigger than life, especially cars. That’s why Hot Wheels have exaggerated proportions like wheels tucking fenders (comparable to 40-inch wheels in 20-series low-profile tires), chopped rooflines and a wider stance. Cartoon-like qualities maybe, but with a big coolness factor that causes an emotional attachment by the owners.

Starting out with eight rides, the line will be expanding to 12 in 2003 with a mixture of SUVs and tuner types, as well as some oddball makes that’ll be quite different from the rest of the pack. The lowrider stuff like the ’64 Buick Riviera was a natural for Eric, who fell in love with the lines and used an old piece of literature for some inspiration. He also said that there’s a Riviera that he sees from time to time when he drives in to work. It’s not really a show ride, but it has a lot of character and it’s just plain cool.

So what does Eric drive to work you ask? How about a bright red ’97 Mitsubishi Eclipse GS-T Spyder that’s done up right? Hey, a guy with this cool of a job has got to have a ride that makes a statement as well as turn a few heads. That’s because Eric is really into his car and is constantly working on different aspects of the ride; from the Wings West body mods to the APC accessories such as the carbon fiber hood, taillights, clear Euro, corners and APC projector beam headlights. The guys at Modern Image did up the cool decals to offset that bright red paint.

As far as the suspension goes, the car is lowered by using Eibach Pro-Kit springs and Tokico “Illumina” five-way adjustable shocks. More handling goodies come in the form of Road Race Engineering’s rear strut tower bar and front lower stress bar and an APC front strut tower bar thrown in for good measure. Stopping them ponies to a halt are a set of AEM Big Brakes (front and rear) along with Earl’s stainless steel brake lines. Rolling stock on the Eclipse is a set of 19-inch TSW Force wheels wrapped in 225/35-ZR19 BFGoodrich “Scorcher” TA radials.

“I’d like to say thank yous, shout-outs and whatevers to the Hot Wheels Street Team, Carson Lev, Jonathan Bedford, Dave Martis, Joe Maynard at APC, Scott Centra at Wings West, Robert Wilson at Modern Image, John Concialdi and Lawson Mollica at AEM, Steve Paltt at BFG, the guys at TSW and Mike at Road Race Engineering for steering me into a new direction,” declares Eric. “Oh, and to my girlfriend Geri and her daughter Madelyn for their patience and understanding. You girls get to enjoy this more than anyone!”

We hope that we gave you a little insight into what goes on in the world of Hot Wheels and some of the people behind the scenes. We’ll be visiting with them again in future issues with a visit to the 16th annual collector’s convention and the super-popular Redline Club, as well as other cool stuff during the 35th anniversary, and don’t forget to check them out at www.hotwheels.com!