Newsletter
Sign Up today for our FREE Newsletter and get the latest articles and news delivered right to your inbox.
Home » Custom Bicycles – Joker’s Bike Club 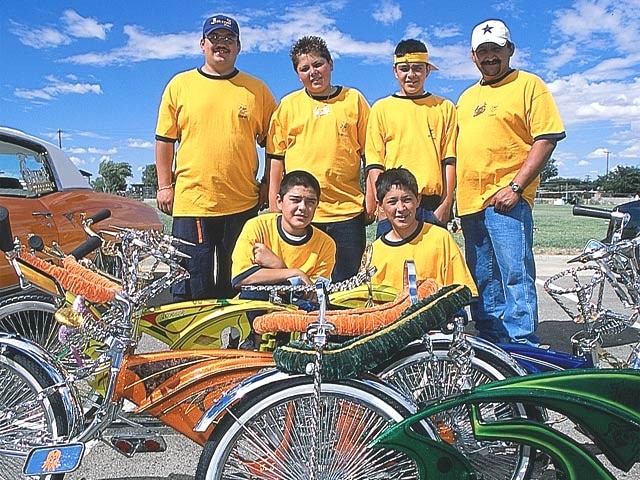 Rolling into this issue of Lowrider Bicycle Magazine is Jokers Bike Club, one of the hottest clubs going. Hailing from Ciudad Juarez, Mexico, this young group of lowrider bicycle enthusiasts was out to show that they could build show-stopping bikes just as good south of the border as they could in the USA. The club’s primary members are Salvador Sandoval, Jose Luis Sanchez, Martin Sandoval, Jorge Sandoval and Cesar Sandoval. Together, these hardcore bike fans have racked up many trophies for their fine custom bike work, and now, they’ve landed a spot on the pages of LRB.

For starters, Martin and Jorge put their heads together to build up a bike known as “Blue Mystery.” Though it’s amazing what they have been able to put together, they’ve revealed their secrets to us: Martin and Jorge first used a simple frame and dressed it up with 16-inch 72-spoke wheels mounted onto 20×1.75 Kendra llantas. Then the bike was further enhanced with cut mirrors. Martin and Jorge said that they spent a whopping $2,500 dollars getting the bike to look this good, but their fellow member Cesar says that he went over his spending limit and put in more than $3,000 fixing up his bike.

Cesar’s two-wheeled beauty is known around the barrios as “Hysteria.” A fitting name since, as you can see, the bike sports a crazy candy lemon-lime paint job with candy green and red graphics, thanks to Julio Flores at Pinturas JYJ in Juarez. The bike was upholstered by Celso Perez at Tapiceria Eddy’s in Juarez. The bike also features custom-made fenders, steering wheel and seat. The chrome plating that gives the bike its shining luster was done by Sun City Chrome Plating in El Paso, Texas, where Cesar himself has garnered a few prizes. “I won a lot of First Places at Juarez and El Paso,” he says. “My dream is to make it to Las Vegas with my bike and win Bike of the Year.”

Well, Cesar isn’t the only one who dreams of making it to the top. Jose would also like to appear at the Super Show with a bike that he calls “Orange Scandalous.” Aside from the flawless marbleized candy tangerine paint scheme that gives the bike its name, Orange Scandalous also has a custom frame made by Jose’s uncle Salvador, Sr., as well as custom pedals and 144-spoke wheels mounted onto 20×1.75 Kendras. “I want to go to number one with my bike,” says Jose. “So that’s why I will make all of the modifications needed.” Well, Jose has a pretty good start, que no?

Another member of the Jokers is 13-year-old Salvador, whose bike, “Death Dealer,” cost about $2,500 to fix up. Salvador says that it took him about 1 1/2 years to get his bike rolling tight, but that he’s still not quite done. For now, the bike has delicious candy green paint mixed in with yellow pearl for a unique color scheme, thanks to Julio Flores at Tapiceria Eddy’s. All of the body modifications were done up by Salvador, while Miguel Villa of Juarez made the cut mirrors that embellish the bike. Death Dealer also rides on 144-spoke wheels mounted onto Kendra rubber.

“This year was the first time that we went to shows in El Paso,” says Salvador. “We won a lot of trophies and now we want to start going to shows throughout the USA.” Well, don’t be surprised if you see more Jokers creations cruising into a show near you. And that ain’t no joke!