Newsletter
Sign Up today for our FREE Newsletter and get the latest articles and news delivered right to your inbox.
Home » Custom Bicycle Websites – Two-wheeling in Cyberspace 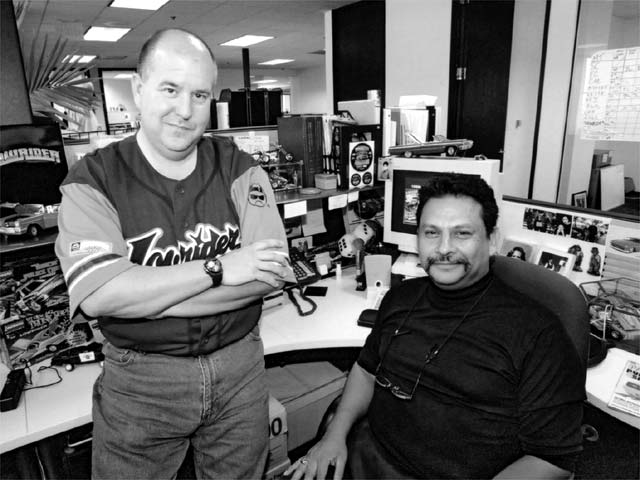 You already know that Lowrider Bicycle Magazine is the foremost authority on the entire lowrider bike and model industry, but did you know that we also have one of the coolest web sites, too? If you haven’t checked out www.lowriderbike.com (http://www.lowriderbike.com), you’re missing out on some really cool stuff. The web site is an extension of what you’re holding in your hands… think of it as getting to see all of the cool stuff that we didn’t have room for in the magazine.

You have to realize that to put out one issue of Lowrider Bicycle, we go through a ton of film, and there’s always some leftovers… sort of like Christmas dinner. Well, instead of letting the photos sit around in a box, we decided to show you online all of the things that you didn’t get to see in the magazine.

So how does all of this get from the magazine to the web site? That’s where the Internet division comes into play. The two guys that you see in the photos are the men who make it happen. That’s former Lowrider Arte editor Armando M. Avila and Dan Leadbetter at the helm of the web site, making sure that the content you see is fresh and current.

As producer, it’s Dan Leadbetter’s job to make sure that the site is up and running, and that the content flows smoothly from the print side onto the web site. In the role of content manager, Armando’s the guy who helps pick out the expanded coverage and works with the rest of the development team to make sure that deadlines are met and everything is in it’s place. Together, these are the two guys who make Lowrider Bicycle Online an informative and fun place to visit.

You may be thinking, “Wow, what an easy job… All these guys do is surf the web all day.” Well, it’s a little more involved than that. Like building a really cool lowrider bike or model, it takes a lot of planning and perfect execution. There’s a lot of coordination with the developers that goes on, many hours of checking the site for mistakes and making sure that it’s 100-percent ready to go before you even click your mouse. Like prepping your bike for a show, there’s many coats of wax and polish that go into the web site before it goes “live.”

As if you couldn’t tell from the photos, both Armando and Dan are bike fans, as well as model collectors and builders. As you can see from the photos, Armando has amassed quite a collection of models… some are off the shelf kits while others are hand built from scratch. As far as bikes go, Armando has built a super cool lowrider bike for his son. More on that elsewhere in this issue.