Newsletter
Sign Up today for our FREE Newsletter and get the latest articles and news delivered right to your inbox.
Home » Custom Tricycle – Your Worst Nightmare 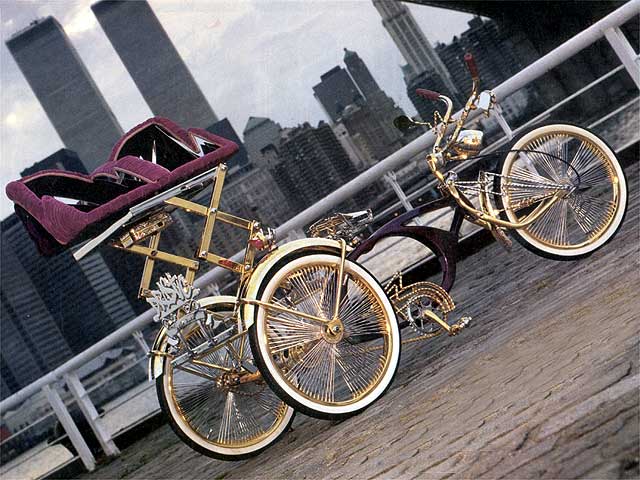 Being a lowrider on the East Coast is not an easy thing with the weather and all, and building a lowrider bike is even more unusual. There aren’t as many people exposed to the bike phenomenon as on the West Coast, but that hasn’t stopped Angel Cruz of Brooklyn, New York. After having built an ’81 Olds Cutlass and ’91 Chevy Caprice, Angel decided to take a short break and build a trike, but being of the hardcore lowrider mentality, he couldn’t just throw together anything, so he had to enlist the help of some of the West Coast’s best to make it all happen the way that he envisioned. Many may try to clown and say that this is basically a West Coast trike, but it’s all about knowing where to go for the best work and Angel had the good sense to go to the best in the business if he wanted to have a world-class trike.

Angel’s “point man” in California was Javier Contreras of San Fernando, California, who not only did the bodywork, but made sure that all of the other work was done properly and got back to the “Big Apple” in one piece. Javier started by smoothing and molding the body, and setting up the rear for the trike setup. With all of the bodywork finished, it was shipped back to NYC where fellow Drastic C.C. member Marvin of Artist Technicians performed the painting, laying down a purple/violet color scheme and then going to work on a few murals. Meanwhile, back in California, a great deal of engraving was going on.

If there’s one thing that you can say about this bike it’s that it has details. Hernan D’Aloia of Hernan’s Custom Engraving in Pasadena, California, left his mark on this project, engraving almost everything on the trike. In fact, you continue to find something engraved after you thought that you had found it all. Equally as impressive is the gold and chrome plating, a combination that’s not easy to make happen, as it’s a multi-step process to have the two together on the same part. Many of the customs parts were supplied by Gonzalo at G.E. Antique Creations in Santa Fe Springs, California.

The wheels were laced by Warren Wong at Slam-N-Ride in Pico Rivera, California, engraved by Hernan and then handed off to Caltron Chrome Plating of Whittier, California, and Juan at Golden Plating in Santa Fe Springs for the chrome and gold plating, respectively. The loveseat is connected to an 11-foot scissor lift, gold and chrome plated and looking pretty. At the flick of a switch, the loveseat is off and spinnin’, giving all a view of the purple and violet velour button-tucked loveseat complete with Plexiglas mirror accents. The loveseat was covered by Henry’s Customs in Pasadena.

Angel was wondering what to call the trike when his eight-year-old son offered, “Your Worst Nightmare,” and so it came to be that what probably seemed like a nightmare at one time or another turned out to be one of the toughest trikes in the country. Not one to rest on his laurels, Angel is all set with a bunch of new mods in the wings that will have him shooting for “the title.” If the past is any indication, Angel and his Nightmare three-wheeler are poised for a bull’s-eye.