Newsletter
Sign Up today for our FREE Newsletter and get the latest articles and news delivered right to your inbox.
Home » Blue Baller 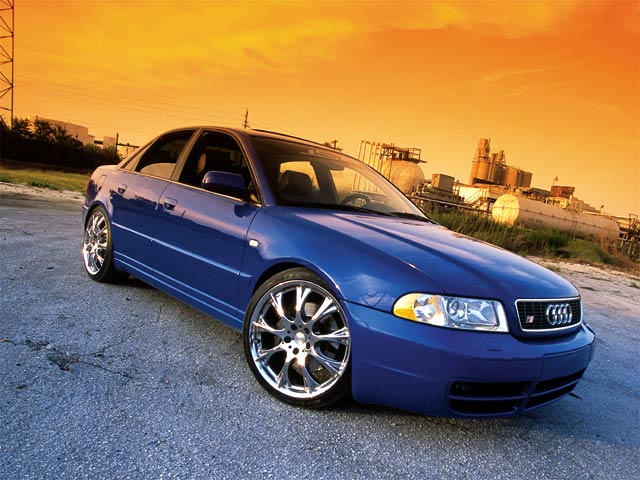 It must be nice to be able to build a hot Euro like Karen Bell’s 2000 Audi S4 Quattro, especially if your partners in a hot shop like Island Street Performance in Merritt Island, Florida. That’s where Karen, her fiance Brad Jones and their friend Lance Dermody do their respective jobs. Brad is the electronics wizard and Lance is the mechanical magician who makes things happen in the shop. Since opening up, the trio has been making waves in the surrounding compact community; busy can best describe their current situation!

The car is just one example of what can come out of the shop with clean mods and attention to detail. Unmentioned in the tech specs is a little custom wiring job done by Brad. A factory Audi switch wasn’t in use, so it was made to activate a set of front and rear police lights; for grins, of course. There’s a few other tricks up their sleeves, but they really don’t want to say before they are implemented. She’s even got a hopped up Honda Civic that’s running in the high 12s on the strip. Talk about keeping busy behind the wheel! Karen adds, “Props to my mom, best friend Lance and my fiance Brad for their continued support and work on this car and my Civic. There’s more to come from both cars and Island Street Performance. A special thanks to Harsh Reality Car Club for their support at show and events.”

Interior:
Door panels and seat inserts are done in blue Alcantera (suede) that can be “custom” picked through Audi. The trunk also features a spare tire cover with an embossed Audi emblem also covered in blue suede (which had to be ordered from Audi) as are parts around the audio components. Seats have been embroidered with Audi logo, as were the floor mats. Shifter is stock but is linked to a UUC short shifter kit.