Newsletter
Sign Up today for our FREE Newsletter and get the latest articles and news delivered right to your inbox.
Home » USO Car Club’s 25th Anniversary Celebration 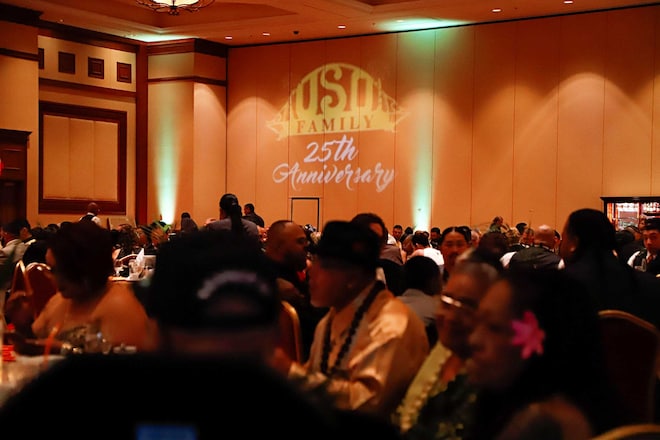 Three letters, two palm trees, one love. For 25 years, USO Car Club has thrived on a foundation set by the legendary Kita Lealao … a foundation where the club’s members have always been the priority. Their “no color lines” attitude has created a welcoming environment for anybody who loves the lowrider lifestyle. It’s this family style atmosphere that has set the platform for some of the sport’s most renowned vehicles ever built, whether it be at a picnic or simply lining up to roll into a show. If you have ever had the chance to hang around any USOs, then we don’t have to tell you that it’s just like one big party. So, you can only imagine the electricity leading up to their long-awaited 25th anniversary celebration.

Kicking off their two-day weekend of festivities, 60-plus cars consumed the Las Vegas strip. Their presence was indisputable as they caravanned their way to the Las Vegas Super Show. The club, which has been known to be heavy in numbers, spent the day cleaning cars and setting up displays. As the Super Show preparations came to an end it was time to head back to their hotel rooms to get ready for their much-anticipated anniversary banquet. This suit and tie affair would bring members from all around the globe in celebration of the club’s rich history. Club members reunited, as chapters from different time zones had all traveled to Las Vegas to share their most prized car builds. Once dinner and formalities were out of the way, it was time for the speeches and the countless recognition of some of their outstanding members. With over 25 years of history, you can bet that the list was a lengthy one. In total reverence to Kita’s legacy, the club showed love to the hard work and dedication displayed among the rows of cars representing USO with pride.