Newsletter
Sign Up today for our FREE Newsletter and get the latest articles and news delivered right to your inbox.
Home » 2019 Lowrider Miami Super Show 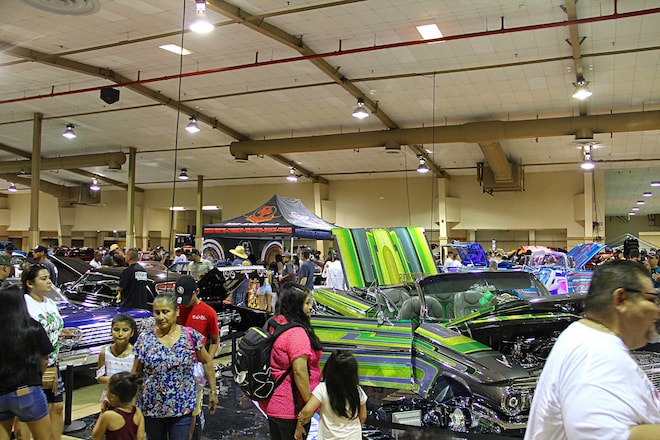 It was a tropical Cinco de Mayo weekend at the Miami-Dade County Fairgrounds as the 4th annual Miami Lowrider Custom Car Super Show rolled into the Fair and Expo Center Sunday. The indoor/outdoor car show festival was presented by Cuanthom Productions and Lowrider magazine, featuring hundreds of the baddest customized lowriders, motorcycles, trucks, and bikes from the tropical coast.

Making the trip from the outer limits was the team from Texas known as the “Double Trouble Crew” and their fabulous Lowrider of the Year 1957 Chevy convertible. Also loading up enclosed trailers and making the long haul in full support of this super event was Anthony Buchanon Sr. and the offensive front line of the Cleveland Browns with their Fire Alarm Red 1964 Rag (Sep. ’17 issue). Also coming out to join in on a 20×20 display showcase was Kyle Giuffre’s 1961 bubbletop (July ’19 issue) from GoodTimes Car Club.

The show’s entertainment festivities featured the world-famous hydraulic car hop competition, the rad motorcycle club “Cartel Baggers,” the exotic display of Red’s Hydraulics vehicles by the shows entrance, and Florida’s long list of car clubs, including 25th Street Ryders, LowLyfe, and Torres Familia, to name a few. The festive Miami crowd enjoyed the weekend with a variety of food from the onslaught of vender food trucks. Just about everywhere you turned there was a bar, as margaritas and pilsners were poured throughout the day.

The Lowrider-Motorsport Showcase judges were on hand and back where they belong as they had their clipboard judging sheets full from the tallying of lots of points, compared to years past as the caliber and quality continues to rise on the East Coast. Tons of vendor booths were busy all day, like the Lowrider Clothing booth, Tropical Glitz/Manny’s multi-color custom paint products, famous lowrider model Dazza, the Batmobile, and the metal fab factory of Krazy Kutting. There was music everywhere, and not just the main stage, plus Azteca dancers to bring in the holiday. But the ones who had a bigger blast were the lowrider bicycle and pedal car fans, aka the kids, who had fun all day in the Kids Zone and massive jumper.

For Lowrider magazine, it was a five-day vacation of taping down floors, vehicle exhibit move-in, meet and greets, along with photography coverage, but it all went by too quick. The welcomed visit from the Florida lowrider community faithful were as warm as the weather, so go ahead and check out the one-and-only Cinco De Miami car show event. Next year try to join in on the celebration and bring your trailer and whole family to experience and tropical lowrider super event.