Newsletter
Sign Up today for our FREE Newsletter and get the latest articles and news delivered right to your inbox.
Home » 2017 Lowrider Albuquerque Show 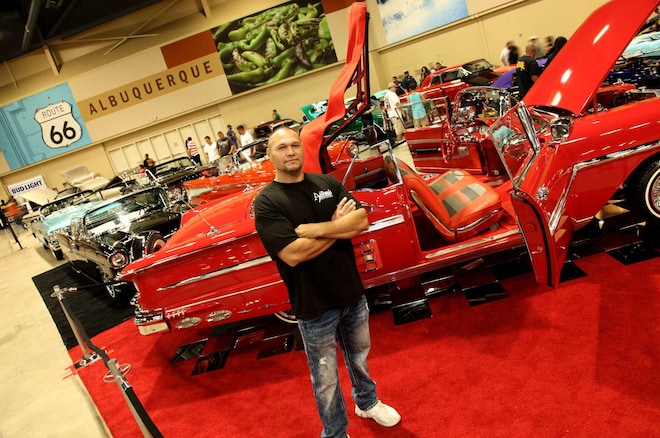 New Mexico has a deep and vibrant heritage that is both seen and felt. Since early Spanish settlers set foot on the land of enchantment, Albuquerque has a sense of pride and history that radiates all around. Aside from being the 32nd largest city in the U.S., another large part of its growing segment is among the custom car builders and enthusiasts. In short, the car aficionados here undoubtedly have spirited ties to the lowriding lifestyle and there’s never disappointment when the annual Lowrider magazine sanctioned event rolls into town.

Produced in conjunction with Joe Romero of Artemis Promotions, Joe and his team continue to throw annual gatherings that sport a mix of tricked-out vehicles. Each year he packs the Albuquerque Convention Center to capacity and it’s not unusual for him to accommodate any overflow by having them displayed outdoors. Walking one of his shows can give you an overdose of car culture and you’ll find immaculate classics, custom lowrider-styled Harleys, and an array of traditional and custom lowriders all under one roof. A variety of flawless masterpieces were selected as honored elite guests to be displayed in Showcase Lane. Sitting tall down the middle aisle were head turners, like Profie Maldonado’s woodie “Driftwood” and Ken Montoya’s 1962 Impala ragtop. In addition, Chris Melendez’s exquisite 1951 Chevy DeLuxe was prominently perched atop custom jackstands, showing every angle from the belly to its roofline. It was there spectators could see just why this radical Bowtie holds the LRM “Bomb of the Year” title.

Additional attractions were plenty but other highlights at the show included Daniel Montano (the new owner of “Inferno”), who stood proudly across from “Blvd Bully.” Trekking in from the West Coast was a trio from Winos Only Car Club that consisted of Cynthia Camarena’s divine 1957 Chevy convertible, Mario Camarena’s prestigious 1964 Chevy Impala, and Steve Noesser’s awe-inspiring 1957 Chevy hardtop. Bobby Garza’s 18-wheeler drove in from South Texas and unloaded his immaculate 1987 Oldsmobile Cutlass Luxury Sport “RM Series” and his matching Harley-Davidson that flew the GoodTimes Car Club plaque. Chema Juarez’s 2003 Lincoln Navigator from Nokturnal Car Club and Laurence Salazar’s 1962 C10 were both extraordinary sights to see in the truck category. The influx of bombs from Oldies, Viejitos, and the alike displayed a mint lineup ranging from Buicks to Chevy Fleetlines. Their president, Tomas Vasquez, who brought his 1962 Chevy Impala “Tipsy” all the way from East Los Angeles headed up the impressive Imperials Car Club aisle.

All eyes and cell phones were pointed toward Candido and Rosa Mendoza’s 1953 Chevy bomb that had beautiful religious artwork done by the infamous David “Shadow” Ibarra. A huge number of bikes and trikes turned out for this event but grabbing top honors was Jose Zamorano, Austin Rubio, and John Sudurkan.

To say this event was amazing would be an understatement; instead it was a celebration of car culture and yet another successful event for Artemis Promotions. The Lowrider stop in Duke City would not have happened without Joe’s sponsors Albuquerque Tents, Xfinity, Hooters, Thunderbird Harley-Davidson, World Wide Automotive, Albuquerque Hispano Chamber of Commerce, King Kong Customs, Yearwood, Straight Street Automotive, and Budweiser.

In closing, Joe Romero of Artemis Promotions would like to thank all those who supported the event while sending a gracious thank you to God, his family, his staff, and friends. It’s safe to say, we’ll see you all next year as the lowriding flavor will forever be alive and well in the land of enchantment.