Newsletter
Sign Up today for our FREE Newsletter and get the latest articles and news delivered right to your inbox.
Home » Style Car Club Celebrates 40 Years of Lowriding Camaraderie, Respect, and Tradition 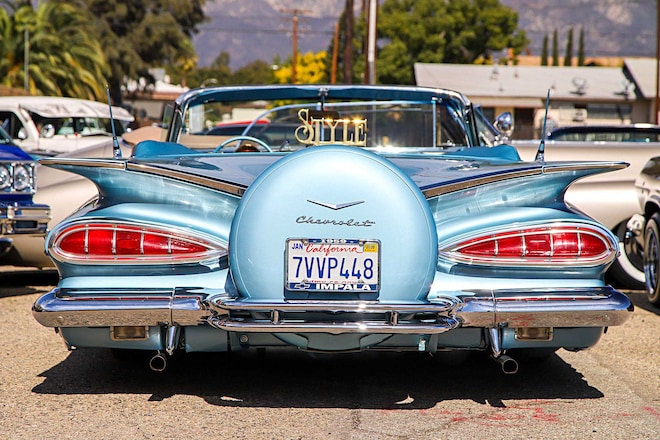 The founding members of Style Car Club held on tightly to the belief that a car club should represent its members’ way of life, so in 1979, a group of friends decided to break off from their original car club to form a brotherhood dedicated to family, friendship and community. This marked the genesis of Style Car Club, “and the rest was history,” says Danny Ayala, advisor and former President of Style Car Club.

The club was born in Pomona, California, at the end of an iconic decade. In the early years of the club, the founding members needed change. They wanted to experience more than just car shows, so they focused on cruising the streets of Southern California and hosted dances throughout the 1980s. Danny, who joined Style Car Club in 1981, fondly recalls the fun times spent dancing the night away with party crews and other car clubs. The parties were so that Los Angeles rapper Kid Frost frequently stopped by to hang out. “We would always try to unify the clubs in the area,” Danny says. While other car clubs began as trouble-making gangs, Style Car Club stayed true to its mission of keeping a welcoming and family-friendly atmosphere. “There were many car clubs filled with hate and malice. Style Car Club was not that type of club,” and adds, “[Style Car Club] is all about friendship, family, and being helpful to others even if they aren’t a part of the club,” Danny says.

To celebrate four decades of commitment and dedication, Style Car Club proudly celebrated its 40th Anniversary with a black-tie affair held at the San Dimas Country Club. The event highlighted the success and strength of Style Car Club’s impact over the past 40 years. Attendees were treated to a spectacular dinner complete with prizes and a surprise appearance by Mark Wood—lead singer of funk band “Lakeside.” The DJ and live band kept the vibe easy, with old school classics flowing throughout the night.

While no original members remain in the club, current members extended an invitation out to them as a gesture of gratitude and respect. Nine of the founding members attended the banquet where they were honored. “I’m proud that the club is still strong after all these years. Keep it up and remember this club started with the love for cars and brotherhood,” said Arthur Fuentes, a founding member of Style Car Club.