Newsletter
Sign Up today for our FREE Newsletter and get the latest articles and news delivered right to your inbox.
Home » Meat Up Series x Old Town Albuquerque 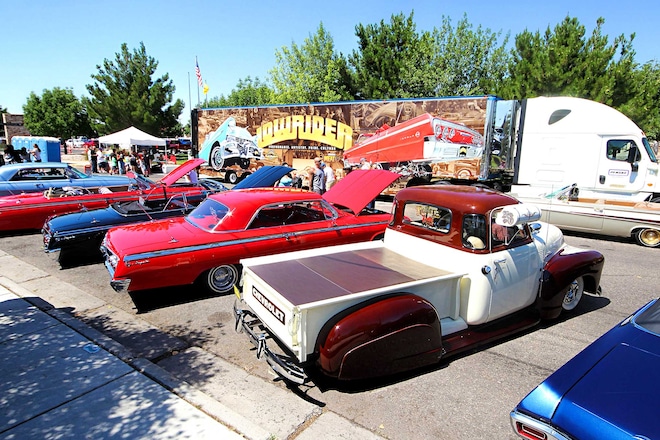 Tiguex Park serves as the back drop for the Meat Up Series that’s held in Old Town Albuquerque. Sponsored by Shell & Quaker state, this annual event is produced in association with Artemis Productions and any donations are given directly to their local Ronald McDonald House Charity. It’s a day of giving, a day of entertainment, and a day when the lush greens of the park are overcome by the smell of secret recipes, and the laughter and camaraderie of the lowrider community.

The attraction packs the park by 11 a.m., and as the grills get to temp, it only takes a few minutes for warm blanketed breakfast burritos to start making their passes. In typical fashion, Joe Ray officially starts the event in front of the Lowrider rig, and from there, the crowds flock to the Quaker State “Spin the Wheel” attraction to snatch up a few free prizes.

Now if you follow us on Facebook, you already know Joe does Facebook Live sessions where he makes his way around the park to sample the goods and provide live feed, and this year, he even caught up with the president of Impala’s Car Club, Ken Montoya. For Ken, it’s an event strictly for show and says, “It’s fun hanging out with the club and families and not have the stress of the shows.” He adds, “It’s also an opportunity to eat some really good food and spend time with the community, and this is what lowriding is about.”

Among the clubs in attendance were Truth, Rollerz Only, Dukes, Imperials, La Familia and High Class. And while the Meat Up Series isn’t a show, Joe Romero (the main man behind Artemis Productions) handed out a few awards, which included “Most Members Event” awarded to La Familia Car Club and “Best BBQ” awarded to Dukes Car Club.

The highlight of each of our shows are the unexpected visitors who happened to be strolling across the park. It’s always a thrill to see their eyes light up in curiosity. Sharing the stories about our cars gives us a chance to share our culture and a great way to shine a positive light on the community and lifestyle we love.