Newsletter
Sign Up today for our FREE Newsletter and get the latest articles and news delivered right to your inbox.
Home » 39th Annual Tejano SuperShow 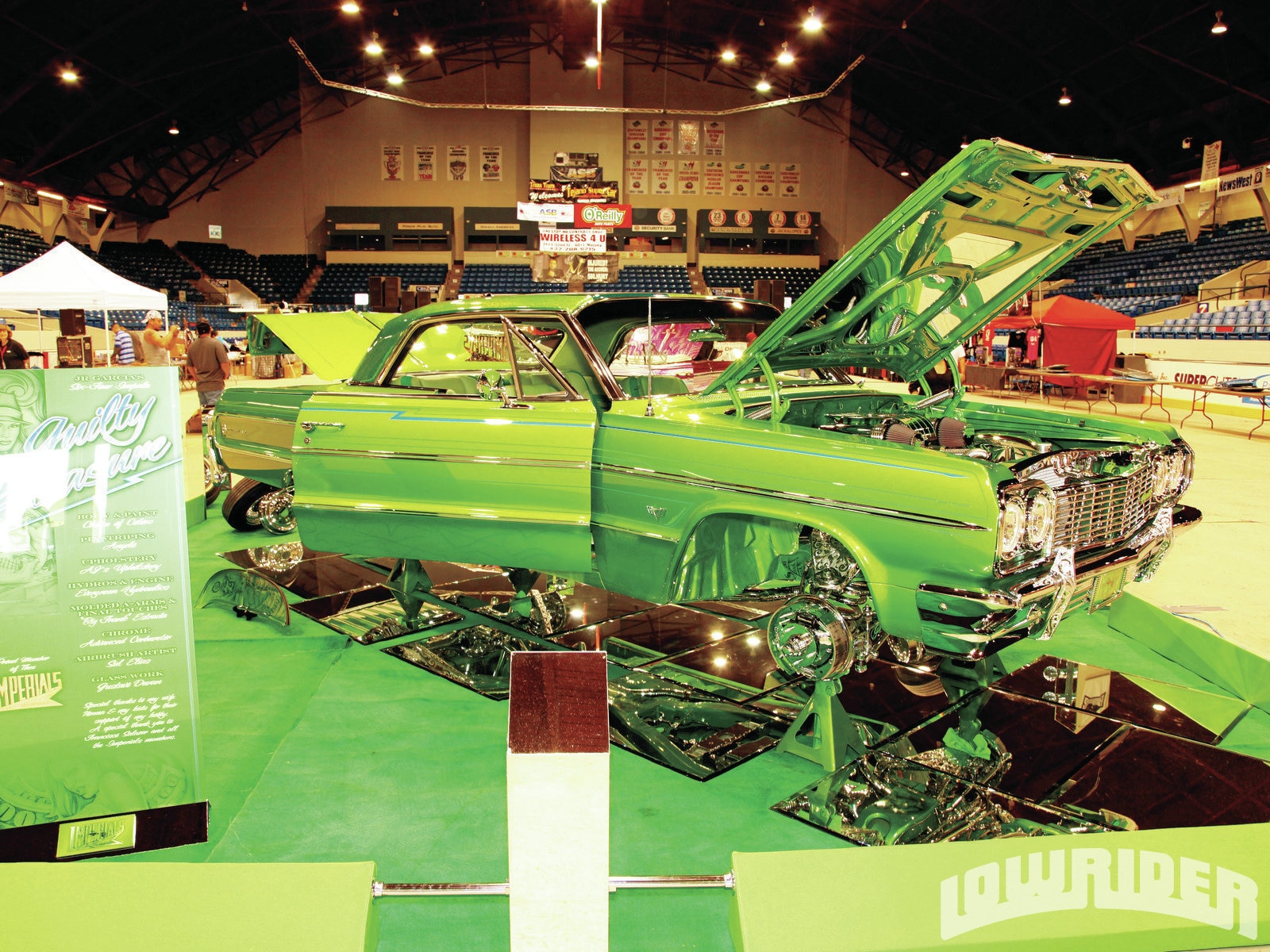 In recent years, this country has witnessed an economic recession not seen since the late 70’s, and the lowrider community is no exception to this frail economy. We’ve learned to tighten up our belts, and unfortunately that may indicate not attending as many shows as years past. Thus, causing a domino effect that has resulted in fewer promoted shows and events; and in some cases, the end of some long-time promoters and car club fundraisers. For those readers that have promoted such events for 10, 15, or even 20 years, you know of the painstaking task of recreating the hype year after year, and not made easier with a bad economy, toward a successful event. Now imagine, doing that balancing act for nearly four decades!

For 39 years, the Tejano Super Car Show has been successful in displaying the Southwest’s best lowriders arte on wheels, and 2010 was no exception. On November 21, the Ector County Coliseum’s six buildings and fairgrounds were filled with over 400 firme rides from throughout Texas, New Mexico, and California. Speaking with Texas Tours Entertainment promoter, Nick Hernandez, he states, The show has been fortunate to have numerous clubs and individuals support the show year after year, and continues to grow with participation from new entries that come to experience the show’s legacy. As was the case, with first timer the Valle’s oldest car club, Brown Impressions. Their candy and chrome lineup included Herb Estrada’s 1990 GMC Mid Evil taking Best Truck of Show and Miguel Sifuentes Jr., with Best Trike in Show. Making the cruise from H-town was Latin Kustoms C.C., showcasing Joe Rivera’s’ 1959 Impala, a truly clean traditional. As a mandatory show for Corpus Christi’s own City Style C.C., the West Texas spectators were treated to the club’s Leal Brothers multi-candy schemes known throughout the state. The Best Club Display went to the Devoted Ones of San Angelo for their impressive outdoor lineup. Taking the Best Traditional of Show was Nano Nevarez’ 1958 Impala, from New Breed C.C., certainly a future LRM feature. On the main floor, the showstopper was Junior Garcia’s 1964 Impala Guilty Pleasure (LRM Apr.’10). I’m certain it will be an easier trek back to Garden Grove, CA., for Junior with the Best Car of Show and Overall Grand Champion honors, leaving little doubt why this Imperials C.C., bowtie is among today’s best on the national circuit.

As always, the Texas Death Match Car Hop Championship did not disappoint the hopping fans, as competitors battled for the year-end bragging rights. The judging led by the husband & wife team of Rick and Juliet Carrera of Old Memories C.C., Anthony Hernandez, and Taste of Latin C.C., were in for the difficult task of judging some of the closest measurements in recent times. Topping the Street class was Patrick Montoya’s 1987 Regal of Tru Rydaz- New Mexico hitting 58 inches. In the Super Street class, Luis Spooky Aranda’s 1985 Regal hit 72 inches taking his win back to his Nobleza C.C. in El Paso. Finally, local favorite Sergio Ramirez of Tru Rydaz stood up his 1986 Ranger, hitting a crowd cheering 110 inches and was crowned champ in the Super Street Truck class.

If you have ever attended this show, you know one thing is certain there is no shortage of live entertainment. Throughout the afternoon, Nick had three stages with non-stop entertainment ranging from local acts to recording artists. The main stage kicked off with rap artists Rekluse, Carolyn Rodriguez, MC Magic, and Dorrough closing with his hit Ice Cream Paint Job. Next, Tejano artists Gary Hobbs, Nando y Los Solja Boyz, Fama, and Elida Reyna performed their Tex-Mex flavored tunes. The concert and show ended with the legendary Columbia-style cumbia king, Chon Arauza y La Furia.

Nick Hernandez graciously thanks all of the exhibitors, car clubs, and numerous sponsors to include Top Notch Media, B93, NewsWest 9, Oreilly’s Auto, and BBS Collision for this year’s success and extends an invitiation to the lowrider community in celebrating the 40th annual event in November 2011, with an unprecedented two-day show!! See you there. Paz, Tejas.