Newsletter
Sign Up today for our FREE Newsletter and get the latest articles and news delivered right to your inbox.
Home » Albuquerque’s Car Clubs And The Colorado Rockies Triple A Team Are A Home Run! 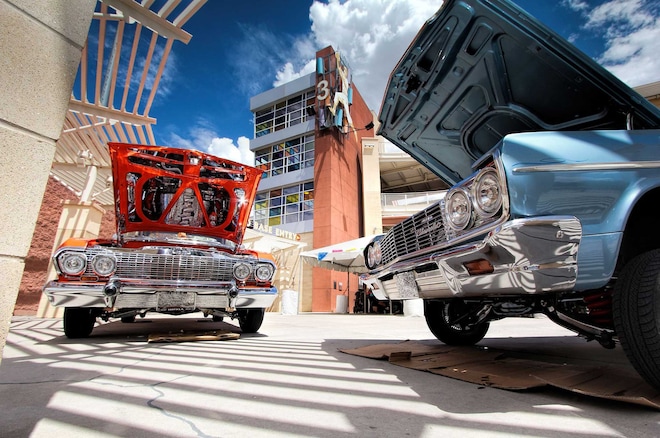 Baseball is considered by most to be America’s favorite pastime, though for us in the Lowrider community, we happen to have another favorite pastime as well. A while back, these two cultural favorites got together for nine innings at Isotope Stadium in Albuquerque, New Mexico.

City Councilor Klarissa Pena was one of the main sponsors to make this Lowriders & Baseball promotional event happen. She joined up with DJ celebrity Lorenzo “House” Otero from Rollerz Only to organize the Lowriders at the park day, and to make sure the quality of cars that showed up were of MVP quality, so to speak.

Albuquerque has Major League Baseball’s Colorado Rockies as a Triple A affiliate team called the Isotopes on their uniforms. On this special day as you walked up to the Stadium with your family and kids, you were greeted by a festival experience and a wide variety of lowered classics from all kinds of different car clubs who came out in support of this event. La Familia, Rollerz Only, Drifters, Impalas, and the Dukes clubs from nearby came to support the unique sporting event.

Some of the car clubs were even allowed to parade their rides onto the field before the game along with the fans who also joined in on things to get a closer look. Before the game started, the cars filed out one by one for everyone in the stands to admire.

This was also Ballet Folklorico Bobble Head Night as well, and the first 3,000 fans in attendance received one. The Nuevo Mexico Mariachis were also in attendance as they joined in on playing popular ballads that turned a 7th inning stretch into a festival type atmosphere. “House” told us that he loves for people from all over to come out and enjoy what we put our blood, sweat, and tears into and the fans reactions were priceless. This Baseball & Lowrider event was a huge success and will most likely become an annual past time.

Lowrider Video Series goes on a Shop & Show at Greenspan’s