Newsletter
Sign Up today for our FREE Newsletter and get the latest articles and news delivered right to your inbox.
Home » Post-Quarantine Lowrider Cruise Down Las Vegas Blvd. 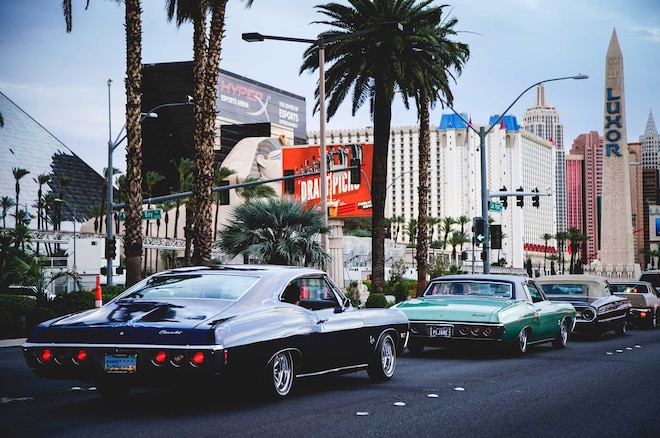 Most of us never thought we would ever be locked down in a state-mandated quarantine within our lifetimes. And yet, we were…many of us, for over 2 months with no work, schools or forms of live public entertainment. To think that at the end of this lockdown, the local lowrider community in Las Vegas, NV, would come out in droves to cruise their beloved cars is something inspiring.

When Vegas-based lowrider photography studio, SugarMill Studios started throwing out the idea, the response was received with positivity and excitement. Teaming up with the local lowrider organizer, Johnny of Paid The Price, they spread the word of a citywide cruise event and immediately drew the attention of local riders, as well as lowriders from Arizona and California. With all summer car shows being cancelled or postponed due to the Covid-19 pandemic, these lowriders were dying to bring out their cars for a night of cruising down the Vegas Strip.

Meeting up at the south end of the famous (and deserted) Las Vegas Blvd, otherwise know as The Strip, an array of candy-colored paintjobs and gleaming wheels were spread across a parking lot which turned into a makeshift car show. The setting sun cast the perfect light on these rolling works of art as they prepared to cruise down the usually jammed up boulevard. One by one, the cars pulled out onto The Strip and the procession began.

The sidewalks outside the casinos had pedestrians who turned their heads and snapped pictures in awe of the sparkling, flaked out cars rolling down the street. It was like an impromptu parade, announcing the end of quarantine and the beginning of a return to normalcy. Cars were seen scraping sparks along the boulevard like a fireworks show for lowrider independence. Old school, funk and hip-hop music blasted from their speakers – it was the perfect setting to create a lifelong memory from the stress of a looming pandemic. Summer has officially arrived.

The cruise made its way to historic Ogden Avenue and ended in Downtown Las Vegas, where a locally owned auto shop, Genuine Auto Services, opened its bays, driveways and street parking to host a block party for the cruise to commence at. Chino’s Burgers, street tacos, and the staff at G.A.S. helped coordinate the parking display of the cars as everyone at this scene eventually grew hungry.

What started out as a Lowrider City in need of a “breakout” from quarantine turned into one of the biggest lowrider turnouts in the recent history in Las Vegas. The cruise turned block party, which went late into the night, made for a perfect ending for all the lowriders that attended.

A father-son project that evolved from being a basic driver into a show car worthy of turning heads along the Vegas Strip.