Newsletter
Sign Up today for our FREE Newsletter and get the latest articles and news delivered right to your inbox.
Home » Las Vegas Meat Up 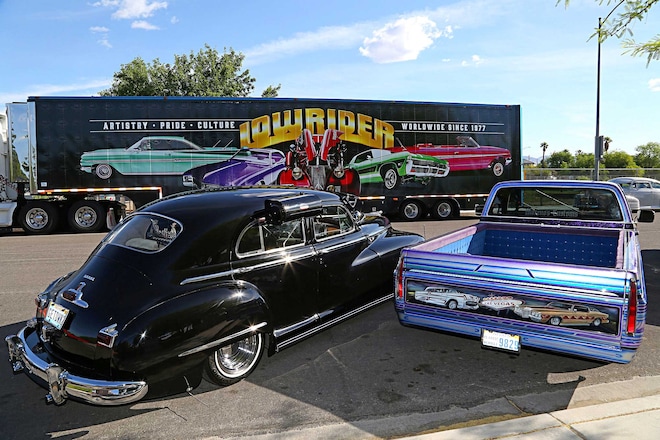 On the morning of May 19, millions of people across the world woke up early to catch a glimpse of the Royal Wedding—but not me. I was too focused on making my way to something that was much more important, much more meaningful, and definitely much more colorful and vibrant. I was on my way to the to the first Boulevard BBQ and the second stop of our Meat Up series, which started this year.

While everyone else seemed to be in a last-minute scurry to polish their rides, pack the meat, and fill up their coolers, all I had to do was pack my camera gear, zip it up, and I was on my way to Patriot Park. It was the second stop of our Meat Up program, brought to you by Quaker State and Shell, and this particular Meat Up was produced in conjunction with SugarMill Studios.

The morning kicked off with a prayer led by Carl Gioiosa from Jesus is King Car Club. Following that, attendees made their way to the Quaker State “Spin the Wheel” attraction as they tried their luck winning prizes like koozies, apparel, gas cards, and more.

With smoke bellowing and spices filling the air, we made our rounds to meet with the Q-masters from every club. We pulled up on the table of the Desireable Ones where Armando Prado was serving up his famed brisket and pulled pork sliders along with chicken legs covered in habanero sauce. As we took down each slider and each slice of chicken, it could have been easily said that these were the best sliders and chicken we’ve ever had, and to be honest it seemed it bit suspect, until I found out that Prado is actually a master chef at Bobby Flay’s Mesa Grill in Caesar’s Palace.

Our next stop was with Tiempo Car Club. As one of the oldest car clubs in Las Vegas, Tiempo lined up a small army of ’50s Chevys as well as a mean lineup of hotlinks and burgers that were to die for. In all, every club came with their best and let me tell you, sampling all this food was incredible but as equally disturbing because it was no easy job. Las Vegas Car Club was offering up some incredibly tasty asada tacos, while the fellas from Jesus is King served up King Buffalo Wings that were diced and spiced in a special recipe sauce that I can still taste on my fingers.

See you all at the next Meat Up. Until then, keep your rides clean and your recipes dirty with your secret spices and family recipes!