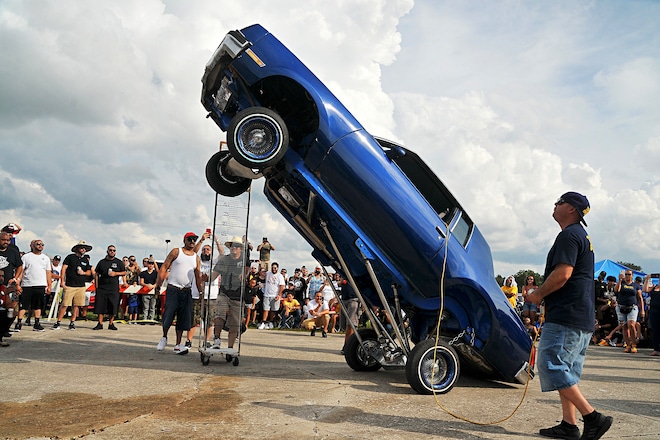 For the past 15 years, Firme Estilo Car Club has been hosting picnics and events regularly, but last year, they wanted something bigger and better than ever before. To accommodate a bigger crowd and more cars, they opted to host their event at the Sun ‘N Fun Air Museum in Lakeland, Florida. To do this, the staff of Sun N’ Fun had to remove classic airplanes from inside the hangars to accommodate the almost 300 cars in attendance.

During roll-in, Lowriders from North and South Carolina showed up as well as some that made the trek from Georgia. Knowing that there’s no such thing as a show without some action, the club incorporated a hop with a payout of $3,000. With competitors aiming for the sky, the sideshow was highlighted by an exhibition-only performance by Joker, and let me tell you, it was a jaw-dropping display of pure pressure.

In all, over 54 awards were given out to the best of the best with “Pocket Change,” a graphic heavy green Oldsmobile Cutlass taking the Best of Show award with “God of Rain” close behind it.

Jose Alvarez, Victor Palacios and the Firme Estilo car club wish to thank everyone that came out to enjoy the event and, in the end, the most rewarding thing to see were the kids enjoying the lowrider culture. To see them intrigued and smiling was enough to know that it may have had enough positive influence to make them future members of the lowrider lifestyle.