Newsletter
Sign Up today for our FREE Newsletter and get the latest articles and news delivered right to your inbox.
Home » Arizona’s Desert Diamond Custom Car Show & Concert 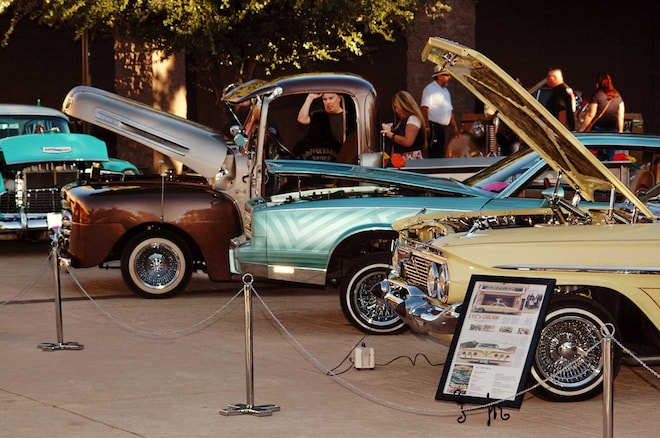 The Desert Diamond show featured a live concert with old school favorites ZAPP, Con Funk Shun, and The Legendary Ohio Players inside the concert arena. DJ Ray and DJ Carlos B kept the music going on the outdoor stage between hip hop artists Fragile and J Rydah hosted by the Manic Hispanic of Mega 104.3 radio.

The big story of the day was definitely the excellent collection of fine custom Lowriders like First Place Best of Show winner Rudy Casas’ 1959 Impala, Second Place Best of Show Jesus Rivera with his 1967 Chevy Caprice of GROUPE C.C., and Third Place Best of Show Joe Rios with his 2003 Lincoln. The Best Bomb Award went to Joe Hernandez with his 1940 Bomb representing Pachuco C.C., while Best Car Club Participation went to IMAGINATION C.C. of Tucson.

The event also featured a Bed Dancing exhibition featuring Doug Padgett of Mi Vida C.C. with host Mark Clayton (Vegas Mark) and a Car Hop Competition all sponsored by Black Magic Hydraulics of Las Vegas. Franks Custom Hydraulics even made the trip from Phoenix to hit his high switches for the crowd. Overall, there were so many great entries that the Motorsport Showcase Judges had a big job ahead of them!

The Desert Diamond Casino Show was one of the most exciting events in Southern Arizona and really brought people together in the Southwest. I had a great time talking with many friends about my new Lowrider Legacy Project and it was good to see old friends like Willie Orona of La Raza Club from the 1970s, Ben Navarro, Armando Duarte, Carlos Smith, Billy, and so many other O.G.s.

The spirit of Lowriding is alive and well in Southern Arizona and Tucson hasn’t missed a beat! I look forward to returning to the Desert Diamond Casino Show and spending time in “The Old Pueblo” once again.