Newsletter
Sign Up today for our FREE Newsletter and get the latest articles and news delivered right to your inbox.
Home » Dallas’s King of the Streets 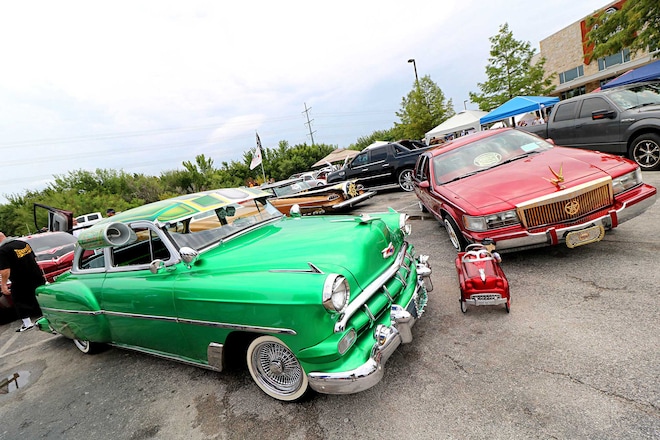 Our never-ending travels to seek out the best lowriding extravaganzas for our faithful LRM readers take us coast to coast and even graciously world-wide. Our most beloved events always lead us back to familiar territories and Dallas, Texas has proved to showcase a bountiful number of lowriding events for well over 40 years that LRM has covered. The King of the Streets, hosted by Eazy Garcia and the Rollerz Only car club, has undoubtedly proved worthy as a promising stop to catch the sights and action that comprises the lowrider lifestyle reflected in the custom builds that converged for this show. While the event is relatively new for the show circuit, Eazy’s renowned status and the Rollerz Only name are iconic references in the scene. Mr. Garcia is best known as one of the lowriding industry’s best engravers. His engraving craftsmanship and his infamous 2-door 1995 Cadillac Fleetwood, “Royal Flush”, which graced the cover of LRM, catapulted him into the industry lime light.

If you are a true gear head, you find yourselves scouring the car forums online or tuning into familiar television shows that are associated with any sort of car customizing subject. Gas Monkey Garage is undeniably one of Discovery channel’s biggest attractive force. The owner and star of the reality show, Richard Rawlings, has built an impressive empire for himself and owns a number of related businesses. Gas Monkey Live was the gracious hot spot for the latest King of the Street festival that attracted nearly 300 custom vehicles that included nothing but the finest machines. Take your choice of American classic bombs slammed to the pavement to distinctive big rigs dropped like you never have seen before. There was a multitude of bowtie beauties that lined the parking lot of the ever-popular venue, it was a sea of shiny candy-coated paint jobs and illustrious chrome under the sun. The Majestix car club line up was an awe-inspiring sight to see. Michael Hernandez’ fully displayed sixty-four proved why they have been cemented as icons in the lowriding scene in the Metroplex. The Rollerz Only line up was on exhibition for all to enjoy and showed why they have won LRM club of the Year multiple times throughout history. Chris Rendon’s astonishing Fleetwood rear end was locked up revealing the chrome undies while Doug Strano’s ragtop 1964 Impala exemplified perfect craftsmanship from top to bottom and bumper to bumper. Henry Hernandez and his 1964 hardtop Impala trekked in from South Texas to sweep up a number of awards including Best Paint. Andrew Williams’ 1970 Ford Fairlane 500 exalted stitch work by JRA Kustoms earned him the Best Interior award. High Class car club always comes out in force and packs a lethal punch in the car show arena. Francisco Trevino and his 1988 Monte Carlo was honored with Best Undercarriage and Best of Show.

The Sunday affair wouldn’t be complete if there wasn’t a bit of royal rumblings going on in the hop arena. Leave the smack talking at the gate entry and allow the pump action to speak for your hydraulic talents and that’s exactly what these competitors did. Thanks to the cash prizes, hop belts and bragging rights up for grabs, a number of hoppers marched in from various corners of the Lone Star and neighboring states to compete. The hop action didn’t disappoint and the heavy hitters were topping out over 110 inches on the sticks. These switch masters stole the show and left onlookers wondering who would win at the next big meet.