Newsletter
Sign Up today for our FREE Newsletter and get the latest articles and news delivered right to your inbox.
Home » Arts in Motion II 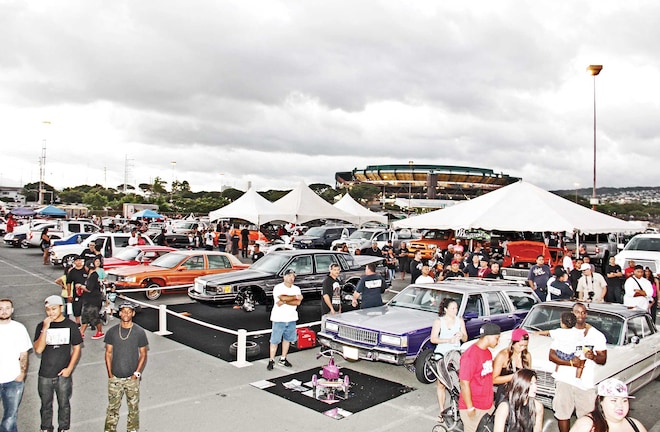 Creating a successful car show in the states is no easy task. It’s even harder when your state is divided into eight islands and separated from the mainland, but that’s what Tommy Sampaga of Hawaii has accomplished. His Arts in Motion car show at Aloha Stadium is one of the most anticipated car shows in the state. The recipe to the show’s success comes from bringing together all the different automobile styles found in Oahu. A show catering to a single style of cars wouldn’t succeed in the island as they don’t have the luxury of being able to drive from state to state to attend “lowrider only” shows.

Even thought the show had a mixture of custom styles, it had more than enough lowriders for us to focus on, like the early ’90s Lincoln Town Car from GoodTimes car club. The fully patterned black luxury car sat on top of a turntable to show off its fully chromed undercarriage. Another ride sitting on a turntable is Michael Pantil’s 2007 Harley-Davidson Heritage. His Harley was featured in 2014, but busted out at this show fully redone. Michael fully flaked and patterned out his bike in candy red and every piece that was able to be chromed and engraved was.

Other than eye candy on wheels, there was also plenty of eye candy on heels. Some of that eye candy included LOWRIDER Magazine models Tanya Love and Ling Fero from California. Also in attendance from Canada was import model Steph Ly. The model that everyone came to see was reality start Brittanya Razavi who signed and took photos with her fans all day.

I’d like to thank Tommy for inviting us to his show once again and to Charlie and the rest of the Supremacy members for their hospitality.